Two months after signing a two-year deal with the Falcons, safety Afolabi Laguda has been let go. The team announced today that they’ve waived the defensive back. 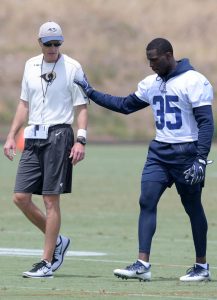 The six-foot-one, 214-pound safety was previously a standout at the University of Colorado, where he compiled 150 tackles, eight tackles for a loss, eight pass defenses, two interceptions and two forced fumbles in three seasons with the team. Despite his performance, Laguda went undrafted during the 2018 draft, but he quickly caught on with the Rams.

Laguda ended up having a solid preseason for Los Angeles, collecting nine tackles in three games. The team liked him enough to briefly stash him on their injured reserve with an undisclosed injury, but he was ultimately waived.

Earlier this offseason, Laguda had an audition with the Colts. However, the Falcons scooped in and ended up inking Laguda to a two-year, minimum-salary deal back in April. Atlanta already had a relatively loaded depth chart at safety, and the team also added free agent J.J. Wilcox to their corps earlier this offseason.