Panthers left guard Amini Silatolu has a torn meniscus that will require surgery, the club announced Tuesday. Silatolu will undergo a procedure on Friday and will subsequently be evaluated on a “week-to-week basis.” Although Carolina didn’t announce a recovery timeline for Silatolu, Joseph Person of the Charlotte Observer indicates a four-to-six week rehabilitation period is typical for meniscus tears. 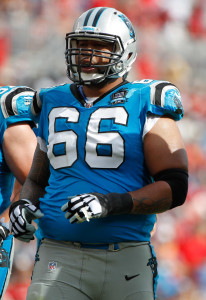 The Panthers could ill afford another blow to their offensive line, which already saw starting right tackle Daryl Williams go down with a dislocated knee and a torn MCL. Per Wilson, Williams is planning to attempt a 2018 return without undergoing surgery. Either way, Carolina’s offensive line — which ranked as a bottom-half unit in both run- and pass-blocking in 2017 before losing All-Pro left guard Andrew Norwell, per Football Outsiders — doesn’t have the depth to withstand multiple absences.

Silatolu had been competing to replace Norwell as a starting interior lineman, and had reportedly been seeing the most reps at the position. Now, undrafted rookie Brendan Mahon is the likely starter at left guard, according to Bill Voth of Panthers.com. Jeremiah Sirles and Greg Van Roten might also be candidates for increased reps, but Person reports Sirles is slotted in as a pure backup, while Van Roten has spent most of his time at center.

The 29-year-old Silatolu started three games and made 14 total appearnces for the Panthers in 2017, a season which marked his return season in Carolina. Originally a Panthers second-round pick and 15-game starter in 2012, Silatolu spent the 2016 campaign out of the NFL. He re-upped with Carolina this offseason on a one-year, minimum salary benefit contract.

The Panthers have announced the signing of seven undrafted free agents:

Allen, a 6’3″ signal caller, began his collegiate career at Texas A&M before transferring to the University of Houston. Things didn’t go as planned with the Cougars, however, as he lost his starting job once again. In January, Allen decided to skip his senior season in order to go pro. All in all, Allen left the NCAA with a 61.7% completion percentage and 37 touchdowns against 18 interceptions.

Allen may have an opportunity to make the final cut with the Panthers as Garrett Gilbert and Taylor Heinicke are the only other QBs presently under contract behind Cam Newton. If veteran Derek Anderson is retained, however, that bunch will be competing for just one potential spot on the 53-man roster.