On Thursday, Notre Dame’s Cole Kmet announced that he’ll enter the 2020 NFL Draft. Kmet, regarded as one of the best tight ends in this year’s crop, was widely expected to forgo his remaining eligibility and turn pro this year. 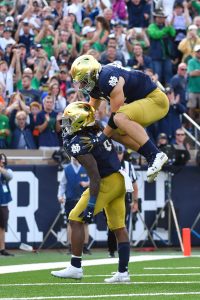 Kmet is a jack-of-all-trades tight end with powerful blocking and reasonably soft hands. Kmet had no touchdowns to his credit before the 2019 season, but he broke out with 43 catches, 515 yards, and six TDs in his final season for the Fighting Irish.

The Patriots could theoretically use a tight end like Kmet to fill the void left by Rob Gronkowski‘s retirement last offseason. The Panthers and Bengals are also among the teams with potential needs at tight end, though they may or may not be in the market for one by the time the draft rolls around.

The NFL committee that advises underclassmen gave Kmet a second-round grade, but there aren’t many TEs in this year’s crop that offer a skillset like Kmet’s. If his workouts go as expected, Kmet seems likely to be a Day 1 pick.