Despite the Broncos fearing multiple severe injuries for left tackle Garett Bolles, the rookie suited up for practice on Thursday and has a chance to play against the Bills. Vance Joseph (via Nicki Jhabvala of the Denver Post) said the team thought Bolles’ injury, determined to be a bruise on his lower left leg, was more serious than it ended up being. Joseph said the first-round pick is “getting better fast” but is obviously hesitant about proclaiming him ready to return to the starting lineup. Bolles has fared well in his first two games, prior to being carted off in the third quarter of the Broncos’ Week 2 win.

Bolles said he also “thought it was serious” and will not rush back. Denver’s bye comes in Week 5, so holding Bolles out for two games would make sense. But his return to practice, on a limited basis, so soon bodes well for a possible return against the Bills or Raiders before the week off.

Donald Stephenson initially received the call to replace Bolles at left tackle Sunday, but utility man Allen Barbre ended up seeing more time there. Barbre and Max Garcia were alternating at left guard, but the veteran played tackle with the Eagles at times in recent years and provides versatility if the Broncos aren’t keen on throwing Stephenson — whom they replaced at right tackle in free agency with Menelik Watson — back out there. Bolles represents the fourth left tackle starter in four seasons for the Broncos, who have also seen numerous players line up with the first-stringers on the right edge in that time.

Here’s more from the Western divisions prior to tonight’s NFC West matchup.

Jimmy Graham isn’t a lock to be ready when the Seahawks face the Titans on Sunday after going down with an ankle injury, head coach Pete Carroll told reporters, including Bob Condotta of the Seattle Times (Twitter link). Seattle has scored only 21 points through two games, and Graham has contributed to that offensive ineptitude by posting just four catches for nine total yards. If Graham is out next week, the Seahawks will turn to Luke Willson and Nick Vannett at tight end.

Here’s more from the NFL’s two West divisions, with a focus on injury news:

Garett Bolles left the Broncos’ blowout win over the Cowboys because of a leg injury and used crutches to walk out of the stadium. The team is worried about a possible severe injury. 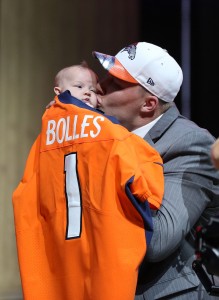 The X-rays weren’t conclusive, Cole notes, and Mike Klis of 9News tweets Bolles does not have an Achilles injury. Bolles has helped the Broncos out to a 2-0 start behind an offense that’s looked much better than it did for much of last season. The Utah product is already 25, despite being a rookie, so a lengthy absence would deprive him of much of a prime season.

Donald Stephenson entered the game for Bolles, but the Broncos used different combinations up front due to multiple injuries. Allen Barbre, who has seen time at tackle in recent years, lined up there as well. Denver traded Ty Sambrailo to the Falcons before the season and cut Michael Schofield, leaving its tackle corps thinner.

The Broncos allowed Russell Okung to depart in free agency after a middling year and used their first-round pick on Bolles, the first tackle they’ve taken in Round 1 in nine years.

The Broncos have agreed to terms with first-round tackle Garett Bolles, Mike Klis of 9NEWS tweets. Per the terms of his slot, it’s a four-year deal worth more than $11MM. Bolles’ signing bonus is worth more than $6MM. 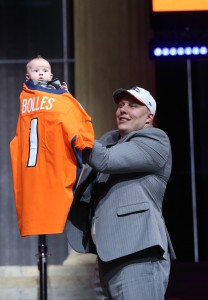 Bolles was viewed by many as the best tackle in this year’s draft and he was the first offensive lineman to come off the board when the Broncos selected him at No. 20 overall. In a draft full of surprises, Bolles to the Broncos was one of only a handful of picks that the prognosticators got right. Denver was in desperate need of a left tackle and they got a player who they feel can hold down the position for years to come.

“If Garett turns out to be what we think he is, he solves a big problem for us for a long time — and that’s that left tackle [position],” Elway said. “We really feel like we were fortunate that he was there.”

The Giants exit draft weekend without many questions about their defense, but their offense has a few. Mainly, Big Blue’s offensive line may still have some issues, particularly after the blocking prospect the team preferred, Garett Bolles, went just before New York made its first-round selection. The Giants were hoping the Broncos, whose left tackle need is probably bigger than theirs since former first-rounder Ereck Flowers is an option in New York, would bypass Bolles in favor of Ryan Ramczyk or Cam Robinson, Ralph Vacchiano of SNY.tv reports. Multiple sources told Vacchiano the Giants zeroed in on Bolles at No. 23, but Jerry Reese has not made a first-round draft maneuver — up or down — in his 11 years leading the franchise.

With Vacchiano noting the Giants were not as high on Ramczyk or Robinson, the Giants moved on. They did not select an offensive lineman until the sixth round, though, which is interesting for a team that has concerns — per the New York-embedded reporter — about Justin Pugh, Weston Richburg and newly signed D.J. Fluker entering contract years. Earlier this month, Reese said the positions up front weren’t solidified. So, the statuses of Flowers and Fluker, who played right tackle and right guard with the Chargers, are probably yet to be determined.

Here’s more from the Giants, courtesy of Vacchiano.

Here’s the latest NFL Draft buzz from Albert Breer of The MMQB. All links go to Twitter:

Cal quarterback Davis Webb is expected to be selected at some point in the middle of Round 2 of the draft, according to Tony Pauline of DraftAnalyst.com. Webb has been mentioned as a possible first-round pick, and the dearth of quarterback options could certainly push him up the board. But Day 2 looks more likely, per Pauline, who adds the Jets, Saints, Chargers, and Cardinals have shown the most interest in Pauline thus far. Those final three teams, notably, currently employ veteran signal-callers, which would allow Webb at least one year of development.

Here’s more on the 2017 draft, all courtesy of Pauline: