The Packers are just about done filling out Matt LaFleur’s inaugural staff. They’ve made a bunch of moves over the past couple of weeks, and made several more today. While LaFleur is keeping defensive coordinator Mike Pettine from Mike McCarthy’s staff, most of the assistants are being changed out. Pettine is staying and the team previously hired Nathaniel Hackett to coordinate the offense, and today they found their third coordinator.

The team also has a new wide receivers coach, as they’re hiring Alvis Whitted, according to Demovsky. Whitted has been in the same position at Colorado State for the last seven years. Before that Whitted spent nearly a decade in the NFL as a player, with stops in Jacksonville and Oakland. 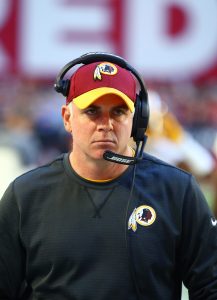 The team is also hiring Kirk Olivadotti to be their linebackers coach, tweets Jim Owczarski of the Milwuakee Journal Sentinel. Up until now Olivadotti had served in the same position with the Redskins. LaFleur served on Washington’s staff as quarterbacks coach while Olivadotti was there, so the hire makes sense. LaFleur will also be retaining Jason Simmons, the secondary coach who has been on the staff in Green Bay since 2011, tweets Rob Demovsky of ESPN.

In a separate tweet Demovsky notes that the Packers completed their interview with Luke Getsy. A source told Demovsky that Getsy interviewed for both the quarterbacks and receivers coach openings, but left town without signing a contract. Jason Wilde of ESPN followed up with a tweet of his own, saying that quarterback Aaron Rodgers “thinks very highly of Getsy and has a lot of respect for him.”

Getsy served on the Packers’ staff under Mike McCarthy from 2014-17 before leaving to take a job as Mississippi State’s offensive coordinator last year. The Packers have been making a bunch of moves to bring guys in from different organizations, and are now close to filling out LaFleur’s staff.