Although the Packers have been linked to a possible Dez Bryant addition, quarterback Aaron Rodgers doesn’t see a fit, as Rob Demovsky of ESPN.com writes. “Well, we like young receivers, so I’m assuming that’s the way they’re going to keep going,” Rodgers said. “I don’t know why you’d cut Jordy [Nelson] and bring in Dez, but he’s a talented player. He’s going to end up somewhere. If he ends up here, we’ll obviously welcome him with open arms and get him up to speed as quick as possible.” Green Bay drafted three wideouts to team with incumbents Davante Adams, Randall Cobb, and Geronimo Allison, so as Rodgers notes, there’s probably not room for a veteran like Bryant on the club’s roster. The Packers, despite having been loosely connected to Bryant since he was released by the Cowboys, are not currently pursuing the 29-year-old pass-catcher.

The Buccaneers, despite some rumblings that they would fire head coach Dirk Koetter at the end of the 2017 campaign, have actually kept their entire coaching staff intact. Until now. 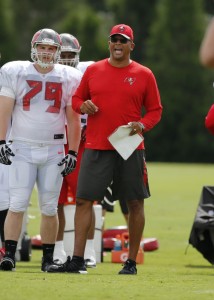 Jenna Laine of ESPN.com reports that Tampa Bay has fired defensive line coach Jay Hayes, which comes over a month after Koetter said he did not anticipate making any changes to his staff. It is unclear why he opted to reverse course at this point, but Hayes’ unit certainly left much to be desired during his two-year tenure with the club.

Of course, the defensive line is not entirely to blame for that performance, especially given that Hayes’ group was hit by several significant injuries in 2017. But no one can really fault the Bucs for making this move, even though the timing of it is somewhat curious. The only other change the team made to its coaching staff this offseason has been promoting Skyler Fulton to wide receivers coach.

Hayes previously served as the Bengals’ DL coach for 13 seasons and was credited for the development of players like Geno Atkins, Michael Johnson, and Carlos Dunlap.