The Raiders are placing four players on IR. Running back Jalen Richard, linebacker Nick Morrow, and defensive backs Keisean Nixon and Javin White will be shelved for at least the first three weeks of the season, per NFL Network’s Tom Pelissero (via Twitter). To take the open roster spots, the team has signed offensive lineman Jermaine Eluemunor and re-signed both tight end Derek Carrier and safety Dallin Leavitt. (via ESPN’s Paul Gutierrez on Twitter).

Richard has spent five seasons with the Raiders, including a 2018 campaign where he finished with 866 yards from scrimmage. He hasn’t been able to match that production over the past two years, combining for only 729 yards from scrimmage in 29 games. The 27-year-old is expected to be a primary backup to Josh Jacobs for another season in 2021.

Morrow had a career year for the Raiders in 2020, finishing with career-highs across the board. The linebacker has been dealing with a foot injury since late August, and he was expected to be sidelined for the start of the regular season. The team brought in some reinforcement at the position today when they signed veteran K.J. Wright.

Nixon has appeared in 29 games for the Raiders over the past two years, turning into one of the team’s special teams stalwarts. White, a 2020 undrafted free agent out of UNLV, got into four games with the Raiders as a rookie.

Smith was a standout playing for current Jaguars head coach Urban Meyer while the two were at Ohio State, and that performance made Smith a second-round pick by the Jets in 2015. The wideout proved to be a disappointment, as he collected only 10 receptions for 135 yards and one touchdown in 14 games (three starts) through two years with the team. To be fair, a torn ACL derailed his rookie campaign, and another ACL tear in 2017 forced him to miss the entire season. The receiver was ultimately waived by the team in 2018 and ended up sitting out that entire season, as well.

He got another chance in 2019 with the Cowboys, finishing with five receptions for 113 yards and one touchdown in four games (two starts). He was released by Dallas prior to last season, and he spent most of the 2020 campaign on the Texans and Patriots practice squad. New England held on to him for much of the 2021 offseason before ultimately cutting him last month.

In Jacksonville, Smith will have an uphill battle to make the roster. The Jaguars have DJ Chark, Laviska Shenault Jr., and Marvin Jones leading their depth chart, with notable names like Phillip Dorsett, Jamal Agnew, Laquon Treadwell, and Pharoh Cooper listed as backups.

The Dolphins will cap Jermaine Eluemunor‘s Miami stay at less than three months. After signing the veteran tackle in June, the team opted to cut him on Tuesday, Tom Pelissero of NFL.com tweets. Miami is also placing wide receiver Lynn Bowden on IR, per Pelissero (on Twitter). 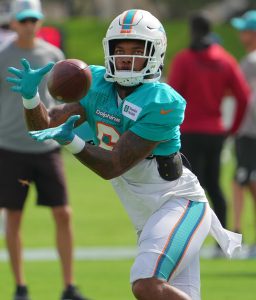 Eluemunor, who spent the past two seasons with the Patriots, was vying for a backup tackle gig in Miami. The Dolphins have done some shuffling on their offensive line, but they will move on without the four-year veteran ahead of the deadline for teams to cut their rosters down to 80 players.

This move comes days after the team acquired third-year tackle Greg Little from the Panthers. The Dolphins have now parted ways with multiple veteran O-linemen since the start of training camp. They placed D.J. Fluker on IR and reached an injury settlement to jettison the guard.

Eluemunor started eight games for the Pats last season, filling in for a team that again was down Isaiah Wynn for a stretch and one that lost Marcus Cannon to an opt-out choice. Pro Football Focus graded Eluemunor as a middle-of-the-road tackle, slotting him 47th at the position in 419 snaps. Eluemunor visited the Broncos earlier this year, but Denver opted to sign Bobby Massie and Cameron Fleming to fill its Ja’Wuan James-created void at right tackle.

The Dolphins acquired Bowden from the Raiders last summer, marking a strange NFL path for the 2020 third-round pick. Bowden contributed in a few Fins games, catching 28 passes for 211 yards for a receiver-deficient team. Miami expanded its wideout group this year, signing Will Fuller and drafting Jaylen Waddle in Round 1. Albert Wilson‘s return gave the Dolphins more depth, and Bowden was battling for a roster spot.

While the Dolphins could keep Bowden on IR all season and develop him, players who land on IR at this time of the year are often subsequently released from teams’ injury lists via injury-settlement payments. It is unclear if the Dolphins play to remove Bowden from IR via that transaction, but Tuesday’s move ensures he cannot play for the team in 2021. 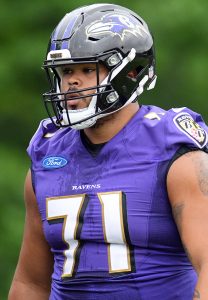 The Broncos’ right tackle seminar will also include Jermaine Eluemunor, according to Matt Lombardo of FanSided (Twitter link). The former Patriot will compete alongside Dennis Kelly, Bobby Massie, and Cameron Fleming as the Broncos look for help up front. 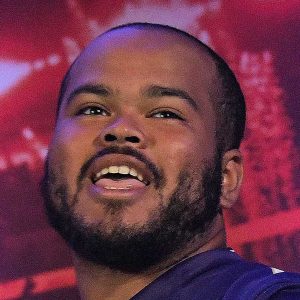 Eluemunor started out as a 2017 fifth-round pick of the Ravens. After starting in two games as a rookie and one game as an NFL soph, they traded him to the Patriots for a low-round draft choice. At that point, the Texas A&M product shifted from guard to right tackle and saw eight starts in 2020.

The Broncos are leaving no stone unturned as they look to replace Ja’Wuan James. Massie may be the most attractive option of the bunch, though he’s had injury trouble of his own. Last year, his season was cut short by a knee injury. And, in 2019, he was limited by an ankle issue. In total, he was limited to 64 games (all starts) for the Bears across the last five seasons.

Patriots star CB Stephon Gilmore is set to earn $10.5MM this year, which is quite a bargain when considering that the top of the CB market now features average annual values in the $17MM range. But it does not appear that Gilmore is pushing for a new deal at this time, and though he missed five practices in a row last month, Mike Reiss of ESPN.com says the absence was not contract-related.

The Patriots did not guarantee Cam Newton the starting quarterback job after they signed him in late June, but assuming Newton is healthy, it would be shocking to see anyone else under center come Week 1. And the 2015 MVP was a “full go” when practices started earlier this month, so all signs are pointing towards Newton serving as New England’s signal-caller when the season opens in a few weeks.

Jeff Howe of The Athletic details how the “competition” has unfolded over the first few practices. Newton has taken the majority of first-team reps, and while he has not been perfect, his accuracy has been impressive. Jarrett Stidham, the second-year pro who was in line to replace Tom Brady before the Newton acquisition, has been dealing with a hip injury, and he has also struggled with interceptions. The team is not concerned about Stidham’s health, but the turnovers aren’t helping his cause.

Brian Hoyer, meanwhile, has had an up-and-down camp thus far, but considering his experience and familiarity with the Patriots’ offense, Howe says the 34-year-old remains an option to start during the early stages of the season.