The Eagles are expected to interview Patriots inside linebackers coach Jerod Mayo for their head coaching vacancy, as Ian Rapoport of NFL.com tweets. Mayo has only been coaching for a short while, but he’s been a fast riser over the last couple of years.

Mayo may lack experience, but he comes with the endorsement of prominent Patriots figures.

“The same stuff [Mayo] carried when he was a player, he’s definitely still got it,” said Patriots ILB Dont’a Hightower in 2019 (via Jeff Howe of The Athletic). “He’s a hell of a coach. Honestly, I wouldn’t expect anything less. He’s got so much knowledge and so much wisdom that he brings – not just as a football player. He’s definitely done it. He’s seen it. He’s played it. The reputation that he has, he’s an all-pro, so it’s great to have a linebacker coach who has been through so much and can relate to a lot.”

After his flirtation with (and near departure to) the Texans, it has been rumored that Patriots exec Nick Caserio badly wants out of New England. That’s not necessarily the case, according to Jeff Howe of The Athletic, who likens Caserio’s situation to that of any player in a contract year.

While Caserio could leave next year when his contract expires, Howe says that it’s too early to predict the outcome of the situation. It has been speculated that Caserio is eager to take on more responsibilities, so one has to wonder whether he could be convinced to stay if he is given more power – and perhaps a different title – within Bill Belichick‘s operation.

Here’s more on the Pats, via Howe:

Entering his first year as an assistant coach with the Patriots, former linebacker Jerod Mayo is emerging as a leader in the team’s rebuilt defensive staff, ESPN’s Mike Reiss writes. 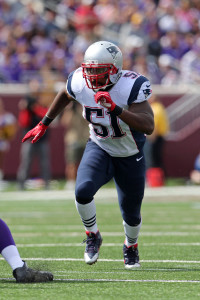 Mayo, who spent all eight of his seasons in New England, was brought in to coach inside linebackers for the 2019 campaign after spending the last three seasons away from the game. The former star linebacker has quickly made his presence felt.

“He was obviously a tremendous player, but he’s a tremendous leader as well. I can honestly say I’ve never seen a player lead a team like the way Mayo led us [when he played in 2008-15]. He did things where he could bring players along and help raise their level of play. As an older guy now, you can only imagine what he could do for that locker room based on his leadership,” safety Duron Harmon said.

It’s been a tumultuous few months for the Patriots defense, as the team said goodbye to defensive coordinator Brian Flores and a handful of assistants after the team won Super Bowl LII. Then came the arrival and quick departure of Greg Schiano, who was tasked to take over for Flores, who took the head coaching gig in Miami. Since then, the team has settled on head coach Bill Belichick serving as defensive coordinator, with Belichick also, at this moment, expected to call plays.

A first-year assistant coach isn’t likely to take those reins, but the Patriots always manage to find and develop coaches on the defensive side of the ball. Players already noticing Mayo’s emergence is a good sign the two-time Pro Bowl selection could be the next hot name to come out of Foxborough.

Nearly two months after Greg Schiano backtracked on his commitment to become the Patriots’ defensive coordinator, the job remains unfilled. Should it stay vacant, the Pats would have a fairly reliable contingency plan.

With Bill Belichick towering over his defensive staff in terms of NFL experience, the current expectation is he will call defensive plays for the Patriots this season, Ben Volin of the Boston Globe notes.

Ceding that responsibility to Matt Patricia and Brian Flores for the past several years, Belichick obviously played a key role in the Pats’ defense. Belichick would often determine when Patricia or Flores would call blitzes, Volin adds. The eight-time Super Bowl champion, counting his two as Giants DC, is coming off perhaps the Super Bowl’s defensive masterpiece — the Rams’ three-point night — and his teams have fielded a top-10 scoring defense 15 times in his 19-year New England tenure.

However, Belichick in a dual role is not the Pats’ official plan just yet. They will use the OTAs and minicamp period to determine their strategy here, Mike Garafolo of NFL.com notes (video link). Flores’ exit leaves the Patriots light on experience among their defensive staff, with former Wisconsin and Arkansas head coach Bret Bielema — previously viewed as a DC option — bringing the most seasoning. And most of that came in college.

After a year of consulting with the team, Bielema is slated to coach New England’s defensive line. Jerod Mayo, whom Garafolo adds is viewed as a possible future defensive coordinator, will split linebackers coaching duties with DeMarcus Covington — with Mayo working with the inside ‘backers and Covington assigned to help the outside players. Mike Pellegrino will oversee the cornerbacks, the team announced. Mayo, Covington and Pellegrino will be first-year position coaches.

Barring an outside hire, or the Patriots handing the reins to Bielema, Belichick would seem the logical choice to play the lead role on defense.

Longtime Patriots linebacker Jerod Mayo will return to the club as linebackers coach, according to Tom Curran of NBC Sports Boston. Mayo, 33, retired at the conclusion of the 2015 campaign, and expressed no interest in coaching at the time. Viewed as a cerebral player with a strong work ethic, Mayo appeared in 93 games for New England after being selected 10th overall in the 2008 draft. He’ll be replacing Brian Flores, who was not only the Patriots’ LBs coach but de facto defensive coordinator before taking the Dolphins’ head coaching position this offseason.

Dolphins owner Stephen Ross created a bit of a stir on Monday when he said, per Jeff Ostrowski of the Palm Beach Post, “After three years, if we haven’t made the playoffs, we’re looking for a new coach. That’s just the way it is. The fans want it.” However, Ross associates tell Adam Beasley of the Miami Herald that the owner was referring to general NFL trends, not specifically addressing Adam Gase’s situation in Miami.

Patriots linebacker Jerod Mayo has announced his retirement via Instagram. The post is titled, “Retiring a Patriot.”

“After a lot of thought, Chantel and I take this opportunity to express our sincere gratitude for what we consider a life changing event…that of becoming a New England Patriot for the past eight years,” Mayo wrote. “We are extremely grateful to “Thundercat,” Jonathan, the Kraft family, Coach Belichick, the Pats organization, and the most amazing fans in contributing to these pages of our lives. As my family and I prepare for the future, be sure that the Pats memories will always hold a special place in our hearts.”

Mayo, who has been with the Patriots since he was selected 10th overall in the 2008 draft, saw his role reduced this season. After starting all but two of his 87 regular season games in the first seven years of his NFL career, Mayo started only eight of 16 games in 2015, appearing in just over 400 defensive snaps. His 47 tackles represented a new career low. In January, Mayo was placed on season-ending IR.

The linebacker, 30 next week, saw injuries derail his last few seasons. He appeared in just 12 of 32 regular-season contests in 2013 and 2014 before staying healthy for most of this year. With Mayo retiring, the Patriots will save $7MM while carrying $4.4MM in dead money.

Here are today’s minor moves from around the league.