Kenneth Acker‘s time with the Colts was short-lived. One month after signing with Indianapolis, Acker has been released, according to a press release. To fill his spot on the roster, the Colts signed undrafted rookie safety Michael Cirino.

The Colts signed Acker for depth following the departure of Rashaan Melvin. Acker was never in line for a starting job, but he seemed like he could have offered support from the bench along with the returning Pierre Desir. Apparently, Acker didn’t cut it on the practice field.

Acker has played in 40 career games, including 15 starts, over the course of his four-year NFL career with the Chiefs (2016-17) and 49ers (2014-15). The Seahawks also showed some interest in him before he landed in Indy.

The Colts annoucned the signing of cornerback Kenneth Acker. Terms of the deal are not yet known, but it’s probably not a costly contract for Indianapolis.

Acker has played in 40 career games, including 15 starts, over the course of his four-year NFL career with the Chiefs (2016-17) and 49ers (2014-15). The Seahawks also showed some interest in him before he landed in Indy.

The Colts lost Rashaan Melvin in free agency this year when he joined with the Raiders, leaving them with a lack of depth at cornerback. Acker probably isn’t in line for a starting job, but he can offer support from the bench, along with the recently re-signed Pierre Desir.

Former Chiefs and 49ers cornerback Kenneth Acker visited the Colts on Tuesday, Field Yates of ESPN.com tweets. Acker could help to provide support in what is a very thin positional group.

The Colts re-signed corner Pierre Desir this season, but they watched Rashaan Melvin leave in free agency to join up with the Raiders. Replacing Melvin won’t be easy. The former undrafted free agent started in all ten of his games last season and graded out as a top 20 cornerback, per the advanced metrics at Pro Football Focus. Acker probably would not profile a starter for Indianapolis, but he could offer depth from the bench. The Seahawks also have some interest in him.

In other Colts news, GM Chris Ballard recently discussed the team’s offseason, which has not been as headline-grabbing as other teams in the AFC.

The Seahawks are still looking to add to their revamped secondary. On Wednesday, they hosted former Chiefs cornerback Kenneth Acker for a free agent visit, Ian Rapoport of NFL.com tweets.

Acker, 26, spent the first two years of his career with the Niners before being traded to the Chiefs in 2016. Although he was a starter in ’15 with San Francisco, he has not been a first string player since. Acker appeared in just nine games with KC in 2016 but saw time in each of the Chiefs’ 16 regular season games in 2017, as well as their Wild Card round loss to the Titans.

Last year, Acker recorded 19 total tackles and one interception. His 210 snaps were not enough to qualify for Pro Football Focus’ rankings, but with a larger sample size, he would have ranked 91st in the NFL. Needless to say, Acker would not be in the mix for a starting job in Seattle, but he could offer help off of the bench.

As of this writing, the Seahawks’ top corners are Justin Coleman (who will likely remain with the team following a second-round tender) and Shaquil Griffin. Free agent Byron Maxwell, who quietly had a solid season in seven games with Seattle, remains unsigned.

Being set to enter the season without a proven starter opposite Marcus Peters, the Chiefs made a move to acquire some veteran help at cornerback. 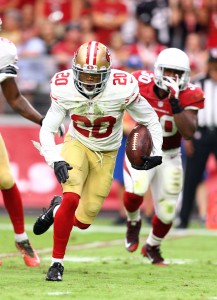 ts. Acker will join a cornerback corps full of young players like himself, with the Chiefs’ top in-house options being homegrown talents drafted in the past three seasons.

The compensation will be for a seventh-round pick in 2018, Adam Schefter of ESPN.com reports (on Twitter).

Acker has started more games than any of Kansas City’s other right cornerback options. Opposite the reigning defensive rookie of the year, who plays primarily on the left side, the Chiefs’ options weren’t exactly proven talents. Third-rounders Steven Nelson and Phillip Gaines represent the NFL experience, but Nelson barely played last season and Gaines — a 2014 starter — is returning from a torn ACL. Rookies KeiVarae Russell and D.J. White joined the fray this April as well.

Acker came to the 49ers as a sixth-round pick in 2014 and started 13 games last season. He intercepted three passes, deflected eight and made 63 tackles for the rebuilding team in 2015. He’ll now join one with playoff aspirations.

However, Acker is also coming off a season he finished on IR. A stress fracture in his foot ended his ’15 season, although the former SMU talent still managed to get in 15 games.

Acker was a primary starter for the Jim Tomsula-led Niners, but under new DC Jim O’Neil, his star has fallen a bit. The 6-foot corner came into the weekend behind not only starters Jimmie Ward and Tramaine Brock, but the 24-year-old relocating performer also sat behind rookies Will Redmond and Rashard Robinson — taken in the third and fourth rounds this year, respectively. Per Cam Inman of the San Jose Mercury News, Keith Reaser and Chris Davis are expected to join the rookie corners as the 49ers’ primary backups this season.

This is the third trade in the past four years between these franchises. The 49ers sent Alex Smith to Kansas City in 2013, and the teams exchanged disappointing first-round receivers A.J. Jenkins and Jonathan Baldwin later that year.

5:45pm: The 49ers have officially set their 53-man roster, announcing the moves in a press release. Earlier, we learned that the team cut ways with 13 players, and we now have the other six players that have been released:

It was previously reported that Tukuafu was released, but it appears that the former Oregon Duck will stick around on the team’s IR.

1:47pm: The 49ers are whittling their roster down to 53 players, and have cut the following players so far, according to various reports:

Lions‘ draft picks Nevin Lawson and T.J. Jones have officially signed their rookie deals, reports Tim Twentyman of DetroitLions.com. Lawson, a cornerback out of Utah State, was a fourth-round selection. Jones, the receiver out of Notre Dame, was taken in the sixth round. That leaves only three players left to be signed, which Twentyman writes is expected soon.