Listed below are the head coaching candidates that have been linked to each of the teams with vacancies, along with their current status. If other teams decide to make head coaching changes, they’ll be added to this list. Here is the current breakdown:

The Colts lost seven of their final eight games, finishing 4-12-1. The team had not lost seven games to close out a campaign since its inaugural season in 1953. But Jim Irsay still looks to be pushing to keep Jeff Saturday, the interim head coach he stunned the NFL by hiring in November.

Saturday is going through his second interview Wednesday, according to ESPN.com’s Adam Schefter, who adds as many as seven candidates will advance to the second round of interviews (Twitter link). That list includes Ejiro Evero, and ESPN.com’s Dan Graziano tweets Rams DC Raheem Morris will receive an in-person meeting. The Colts held virtual interviews with 13 candidates — the most of any HC-seeking team this year — but Irsay was not involved in those sessions. He will be there for the second interviews. 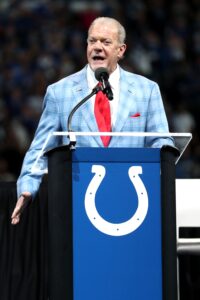 Irsay said in November he hoped Saturday would stay on as a full-time HC, and although no team has made an interim coach a full-time hire since the Jaguars removed Doug Marrone‘s interim tag in 2017, CBS Sports’ Josina Anderson notes Irsay is still pushing for Saturday. More pushback has emerged, however. Just as Irsay confidants attempted to dissuade him from hiring Saturday two months ago, Anderson adds (via Twitter) those close to the owner are again attempting to convince him Saturday is the wrong choice.

Indianapolis should also be expected to meet with Eric Bieniemy and special teams coordinator Bubba Ventrone for a second time. Each remains in the mix, Graziano adds, though no second interviews with either have been scheduled. Bieniemy has generated extensive OC interest around the league, being connected to open jobs and likely on the radar for some that will soon be available, but ESPN’s Jeremy Fowler notes the longtime Chiefs OC is focused on potential HC gigs. Only the Colts, however, have interviewed him for their job.

Some around the league believe this will come down to Bieniemy or Saturday, Mike Florio of Pro Football Talk adds. Considering the backlash both the Saturday hire and Bieniemy’s extended time on the HC carousel have each generated, the Colts choosing Saturday in that instance would create more controversy.

Andy Reid has been the Chiefs’ primary play-caller since 2013, and while Bieniemy has been labeled as a poor interviewer at points during his long run as Reid’s right-hand man, the fifth-year OC has been in place in this role throughout Patrick Mahomes‘ QB1 stay. Considering Mahomes is about to win a second MVP award and will do so after the Chiefs traded Tyreek Hill, that should reflect well on Bieniemy. Judging by the Arizona, Carolina, Denver and Houston searches, however, teams are not closely connecting the Reid lieutenant to such success. Bieniemy and Colts GM Chris Ballard worked together during the latter’s time in the Chiefs’ front office, though Fowler adds the Saturday-Irsay relationship continues to loom over this process.

Ballard ran the first set of Colts HC interviews, SI.com’s Albert Breer notes, adding that Carlie Irsay-Gordon (Jim’s daughter) has played a key role throughout this process as well. Ballard attempted to talk Irsay out of the Saturday hire in November and admitted as much this month. It should be expected the seventh-year GM will keep pushing for a different hire, but Irsay obviously will make the final call. This process should drag into next week, Ian Rapoport of NFL.com adds (video link).

Saturday promised extensive changes if he were to land the full-time job. He offered ex-Frank Reich staffers Scott Milanovich and Scottie Montgomery OC duties, but each turned down the job. That led to assistant quarterbacks coach Parks Frazier receiving the opportunity. The Colts started three QBs during Saturday’s stay (Matt Ryan, Nick Foles, Sam Ehlinger) but only won one game under interim coach. The team’s NFL-record collapse in Minnesota and other shaky performances did not exactly give Saturday momentum coming out of the season. If Irsay bucks staffers’ advice and goes in this direction again, it would make for one of the most interesting decisions in coaching history.

In addition to the previously reported player gripes about the state of the Commanders‘ offense, John Keim of ESPN.com notes others in the organization expressed frustration about the inconsistencies within the team’s offensive philosophy. Washington fired three-year OC Scott Turner on Tuesday, despite having signed him to a three-year extension, and signs point to the team making a more concerted effort to focus on its run game. Ron Rivera and GM Martin Mayhew expressed a desire to run more, even after the Commanders ranked fourth in rushing attempts (538). But Keim adds a litany of complaints surfaced about the nature of the offense — from the team deviating from effective plays to Turner’s scheme being difficult for quarterbacks to digest. Concern about the offense emanated inside the building throughout the year, per Keim, who adds Rivera sat in on offensive meetings at points amid the unrest.

The Commanders’ issues at quarterback and on their O-line, a unit full of veterans, hamstrung Turner’s unit. So did injuries, as the team planned to have Brian Robinson play a major role from the start. The two gunshot wounds he sustained in August derailed those plans, and Carson Wentz barely ended up playing with the third-round rookie this season. While outside candidates will be interviewed, Keim adds the Commanders generally like their offensive scheme. QBs coach Ken Zampese, a second-generation NFL assistant who was previously the Bengals’ OC, will likely be an in-house candidate.

Josh McDaniels‘ decision to break his agreement to become the Colts’ next head coach could hypothetically push the NFL to change its hiring rules, as Mike Florio of Pro Football Talk writes. Currently, teams aren’t allowed to formally hire coaches who are still employed by playoff clubs, but that hadn’t been an impediment given that no presumptive head coach had backed out of a reported deal. Had McDaniels been able to be officially offered the Indianapolis job several weeks ago, the Colts may have been aware of his wariness at the time. The NFL discussed a possible hiring rule change in 2017, but tabled the discussion, per Florio.

The Jets have been involved in “serious internal discussions” about the possibility of bringing back cornerback Darrelle Revis, with owner Woody Johnson very much involved in those talks, reports Manish Mehta of the New York Daily News. The Jets’ interest in Revis is hardly news, but the closer we get to March 9 without an agreement in place between the Patriots and the star cornerback, the more likely it is that he reaches the open market next week.

Let’s round up a few more items related to the Jets and their AFC East rivals….

5:18pm: Boone has a torn meniscus and will require surgery, tweets Eric Branch of the San Francisco Chronicle.

1:52pm: The 49ers have placed Alex Boone and Bubba Ventrone on IR, according to Matt Maiocco of CSNBayArea.com (on Twitter). Filling their spots will be wide receiver Trindon Holliday and cornerback Cameron Fuller, who have been signed to the 53-man roster.

Boone’s knee injury is not considered to be serious, reports Matt Maiocco of CSNBayArea.com (via Twitter). The team placed him on injured reserve only to open up a roster spot for the final game of the season.

Boone had reworked his contract after an extended holdout this past offseason, that resulted in language in his contract that precluded the team from using the franchise tag on him when he is set to become a free agent at the end of next year. Assuming Maiocco is correct in his assessment of the injury, it should not affect his ability to be on the field in 2015.

Ventrone is a special teams ace who has played with four teams since coming into the NFL in 2005. He is set to be a free agent this offseason.

Here are today’s minor transactions, with the latest updates at the top of the list:

We’ll track today’s 53-man roster signings and cuts from around the NFL right here, adding the latest moves to the top of the list throughout the day….

The carousel that is the 49ers’ 53rd roster spot continued to spin today, as the 49ers re-signed safety Bubba Ventrone to a one-year contract, cutting quarterback Josh Johnson to clear room (Twitter account). The Niners released Ventrone on Tuesday when they re-signed Johnson.

Johnson has been serving as the 49ers’ third quarterback, but with both Colin Kaepernick and Blaine Gabbert healthy, he hasn’t needed to be active on game day, and now the team has gotten into the habit of removing him from the roster entirely on the weekend. The veteran signal-caller will likely be re-signed next week for practice.

Assuming he’s active on Sunday against the Broncos, Ventrone, who turns 28 next week, will likely play exclusively on special teams, so it wasn’t absolutely necessary for the Villanova product to be with the team this week during practice.

Tuesday is typically a busy in-season day for NFL transactions, so we expect to add several more moves from around the league to this list as the day goes on. For now, here are the the day’s minor transactions relating to clubs’ 53-man rosters: