The Browns have added a 90th player to their roster, signing free agent defensive lineman Nick Hayden to an undisclosed contract, per a team announcement. Cleveland is now the fourth NFL organization for Hayden, who entered the league as a sixth-round pick of the Panthers in the 2008 draft. 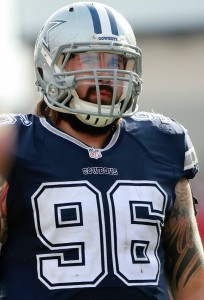 The Browns’ signing of Hayden, 30, comes on the heels of the season-ending surgery fellow D-lineman Desmond Bryant underwent earlier this month to repair a torn pectoral muscle. While Hayden isn’t on Bryant’s level, he logged extensive playing time as a Cowboy from 2013-15 and emerged as a durable option in Dallas. The 6-foot-3, 295-pounder started in 47 of a possible 48 regular-season games during his three years with the club and picked up 130 tackles, including a career-high 48 in 2015 while playing in 55 percent of its defensive snaps. That output didn’t impress Pro Football Focus, however, which ranked Hayden just 115th out of 123 qualifying interior defenders last year.

The majority of Hayden’s action last season came against the run, and the Browns finished 30th in the league in rushing yardage allowed and tied for 26th in yards per attempt yielded. Hayden could help their cause in that regard, or at least provide depth along a line that features Xavier Cooper, Danny Shelton and John Hughes as projected starters, as Roster Resource indicates.

The 49ers were one of several teams who talked with the Panthers about a possible trade for Josh Norman before his franchise tag was rescinded, Jason Cole of Bleacher Report tweets. However, the talks didn’t get far. It’s worth noting that Norman would have had to either sign his franchise tag or agree to a long-term deal in order to make such a trade possible. The 49ers were one of many clubs to be connected to Norman when he became an unrestricted free agent last week but they ultimately did not land him.

The Cowboys bolstered their defensive front from outside the organization earlier this week when they added Greg Hardy, but they also will look to a holdover to continue his work. Nick Hayden agreed to terms on a one-year contract with the Cowboys, Drew Davison of the Fort Worth Star-Telegram reports.

Terms of the deal are not known, but they won’t be anything extravagant.

An unrestricted free agent, Hayden started at defensive tackle in all 16 games for the Cowboys the past two seasons, stabilizing his career after part-time starting responsibilities with the Panthers and Bengals the previous three years. Pro Football Focus, however, graded Hayden as the worst defensive tackle among 81 regulars at the position last season (subscription required) and second-worst in 2013, illustrating what kind of shape the Cowboys’ interior might be in after Henry Melton‘s exit.

A greater need opened up for the 29-year-old Hayden’s workmanlike services once Dallas jettisoned Melton. The cap-drained Cowboys are also likely to lose George Selvie and Anthony Spencer.

Saints tight end Ben Watson was keeping tabs on the franchise tag situation regarding his team and the player he backs up, Jimmy Graham. However, the 33-year-old is confident that both sides will be able to move on and told ESPN.com’s Mike Triplett that heated moments accompany any contract negotiation…

“I’m very confident that it’ll be resolved the right way and guys can move forward. Obviously it’s always tough when you go through litigation with somebody, and it can probably get heated. And I’m sure there are emotions on both sides. But that is the business side of the game.

“And it’s unfortunate that it came to that and that it was so public. But I really think – I know, I don’t think – I know that Jimmy loves New Orleans and I know that he loves our team and the organization and he loves playing here. And we love him, everybody wants him here, coaches included. So when it comes down to contract situations, that’s just a necessary evil…not even evil, but just a necessary progression of getting a player here.”