Eric Weddle‘s return to NFL practices this week evidently did not produce a letdown. The recently unretired safety is set to come off the Rams’ practice squad and play against the Cardinals, Lindsey Thiry of ESPN.com tweets.

This will be Weddle’s first game action since the 2019 regular-season finale. Suddenly thin at safety, the Rams lured Weddle out of retirement earlier this week. Both starters are out for Monday’s game, with Sean McVay adding that Taylor Rapp will not play against Arizona. The Rams placed Jordan Fuller on IR earlier this week.

Fuller will undergo season-ending ankle surgery, and Rapp will not clear concussion protocol in time to play in Los Angeles’ wild-card matchup. Third-year man Nick Scott has played the third-most snaps at safety for the Rams this season, with practice squad cog Sharrod Neasman having also played more than 200 snaps.

A 13-year veteran, Weddle turned 37 last week. While Weddle was durable during the first leg of his career, having missed just three games from 2010-19, this obviously will be an interesting experiment the Rams are conducting. Weddle made the Pro Bowl in each of his three Ravens campaigns, from 2016-18, and was a 16-game starter for the Rams the following year. It is uncertain if the Rams will count on Weddle to return as a starter, but he will suit up in this unusual circumstance.

The Beard is returning to the playoffs. Eric Weddle has agreed to a deal returning to the Los Angeles Rams for a playoff run. The two-time All-Pro is coming out of retirement for one more attempt at a Super Bowl ring.

Weddle announced his retirement shortly after the 2019 NFL season and did not see any time on an NFL field last year. In his lone year on the Rams, Weddle was a team captain and defensive signal-caller.

The new comes shortly after hearing that starting safety Jordan Fuller would require ankle surgery that will hold him out for the remainder of the season. The Rams’ other starter in the defensive backfield, Taylor Rapp, is also in concussion protocol.

Weddle, despite continuing to be a leader on the defense, saw his impact change a bit in his last two years of football. The 37-year old hasn’t forced a turnover in a little over four years, but his last season on the Rams saw him finish second on the team in tackles.

Los Angeles will take whatever version of Weddle they can get as their secondary limps into the playoffs. They face their division rivals Monday night as they host the Cardinals for Super Wild Card Weekend.

In recent years, the Rams have been the last team to start signing their incoming rookies. On Friday, they finally put a dent in their draft class by signing second-round safety Taylor Rapp as well as seventh-round picks Nick Scott and Dakota Allen. 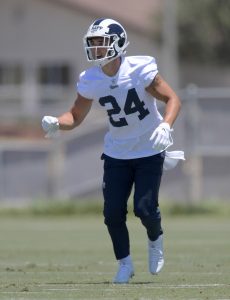 Rapp profiled as one of the best open-field tackling safeties in this year’s class and has a strong football IQ for a player of his age. After he opened his collegiate career with four interceptions but saw that number tail off with time, it’ll be interesting to see if he has a nose for the ball at the pro level.

With Rapp, Scott, and Allen signed, the Rams are left with five unsigned rookies to go, as shown in PFR’s tracker.

The 49ers will host Ole Miss wide receiver A.J. Brown and South Carolina WR Deebo Samuel on Monday, according to Ian Rapoport of NFL.com (on Twitter). Neither player is in the mix for the Niners at No. 2 overall, but both could be an option further down the line.

Right now, it seems likely that Brown will be a first rounder, making him unlikely to be available when the 49ers pick again at No. 36 overall. Still, crazier things have happened and the Niners could always trade up if they want Brown badly enough. Samuel, meanwhile, seems to be right in range for that pick. After watching Antonio Brown and Odell Beckham head elsewhere this offseason, the Niners are undoubtedly in the hunt for receiver help in the draft.