Broncos star Von Miller has tested positive for COVID-19, according to his agent (Twitter link via NFL.com’s Ian Rapoport). His agent says that the Super Bowl 50 MVP is in good spirits as he recuperates at home.

Miller’s camp has kept the Broncos in the loop and the pass rusher plans to speak publicly on the matter tomorrow. Unfortunately, Miller is not the first player to test positive for the coronavirus. Earlier this week, we learned that Rams center Brian Allen has also been diagnosed with the illness. And, early on in the pandemic, Saints head coach Sean Payton tested positive. Allen is symptom-free, Payton has been cleared, and Miller appears to be in okay shape, but thousands have lost their lives to COVID-19. Miller’s diagnosis is yet another reminder to stay safe, practice good hygiene, and stay indoors whenever possible.

“You fatigue real easy,” Payton said after his recovery. “I’d be up moving around, doing something, then you’d want to lay down again. That lasted three or four days. By the time I got the test results back I had begun feeling better. I had my appetite back.”

Miller, 31, is set to enter his tenth season with the Broncos.

And, as Denver 7’s Troy Renck notes, Miller has been dealing with asthma and chronic allergies since childhood. We here at PFR wish Miller a speedy, and complete, recovery.

A few weeks ago, Broncos star linebacker Von Miller expressed disappointment and frustration at his team’s lack of success this season. However, the veteran was quick to clarify that he wants to stick around Denver for the foreseeable future.

“I said before the week, I’m tied to the Denver Broncos,” Miller told Nicki Jhabvala of The Athletic (Twitter link). “It’s pro sports and we all know things can change here and there. But for me and my mindset, it’s a marriage and I’m not looking forward to divorcing anytime soon.”

Miller backed up those claims tonight, as the linebacker expressed optimism in the 2020 iteration of the Denver Broncos (via Jhabvala on Twitter).

Let’s check out some more notes out of the western divisions:

Set for their third straight losing season for the first time since 1970-72, the Broncos did see their best player make the Pro Bowl on Tuesday. But Von Miller‘s postgame comments Sunday left some uncertainty about his future in Denver.

“I don’t really even know what to say. I don’t know how we got to this point. I don’t know why we [are losing] like this. It’s tough,” Miller said, via USA Today’s Lorenzo Reyes. “I’m 30 years old and going out there with whatever issues I’m dealing with and still coming up so short. It’s tough playing nine years with Chris Harris and dealing with these last couple of ones, especially with the type of standard that we had when I came into the league. We went to the playoffs five years straight.

“I know I’m getting ahead of myself, and I’m talking about more than just a game, but this is tough. I’m really lost for words.”

Miller said Tuesday he does not want to leave the Broncos “at all” but was expressing frustration about the situation the team resides, per Troy Renck of Denver7. The Broncos won at least 12 games in each of Peyton Manning‘s four seasons but have failed to win 10 in a season since. Miller has two seasons remaining on his six-year, $114.5MM contract; they are option years at $17.5MM apiece. The Broncos have until the final day of the 2019 and ’20 league years to pick up those respective options.

Former Ravens offensive coordinator Marty Mornhinweg and the Ravens released a statement denying a report by Michael Lombardi of The Athletic claiming Mornhinweg wanted to move Lamar Jackson to wide receiver. Jackson, of course, was the subject of much debate as a draft prospect with many pundits, including ESPN’s Bill Polian, calling for a position change to wide receiver.

Jackson, however, remained adamant that he was a quarterback, was selected in the first round by Baltimore and has taken the NFL by storm over the past two seasons. Mornhinweg, who was replaced by Greg Roman as the team’s offensive coordinator entering this season, made clear in his statement that “My thoughts before the draft, and even more when we started working with Lamar, was that this young man was going to be a special quarterback.” Regardless of what his opinions were at the time, Jackson has proven he is an NFL signalcaller.

Here’s more notes from around the AFC:

The Eagles have called the Broncos about Chris Harris Jr., according to sources who spoke with Dianna Russini of ESPN.com (on Twitter). At this time, however, their asking price is too high. 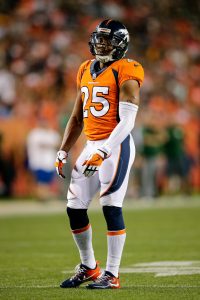 The Broncos are paper thin at cornerback, but they also have no real shot at contention this year. With a chance to add to their draft stockpile, they could move Harris to a team that could put the veteran to good use, like the Eagles.

Meanwhile, the Broncos have no plans to trade Von Miller, sources tell Russini (Twitter link). The former Super Bowl MVP and perennial Pro Bowl pass rusher is signed through the 2021 season. Harris, however, is in a contract year and expressed a desire to test the market after a weeks-long holdout this offseason.

Denver landed Harris as a 2011 UDFA and paired the slot defender with Aqib Talib and Bradley Roby in 2014. While that trio helped the Broncos to the 2015 title, Harris is now the team’s only reliable corner. The four-time Pro Bowler could profile as a player the Broncos would like to extend, despite Harris being 30, due to an inability to find cornerbacks since that 2014 offseason. However, the Broncos are staring at a rebuild and have only a handful of starters from their Super Bowl team left. They traded Emmanuel Sanders last week.

Philadelphia finished second in the Jalen Ramsey derby and inquired on Detroit’s Darius Slay. It’s clear Howie Roseman recognizes his group of corners could use help, with the Eagles’ pass defense having struggled for much of this season. Harris has traveled with No. 1 wide receivers this year, as opposed to locking down the slot, so that would obviously be a key asset for a team looking to get back in the surefire contender mix. The Eagles have been in on Harris for a bit now but may have to deal a second-round pick to acquire him.

The NFL has experienced a dramatic rise in significant trades over the past several years, and there may be a few noteworthy swaps going down this month as we get closer to the October 29 trade deadline. Indeed, Jason La Canfora of CBS Sports says there is a sense among general managers that we may see more trades in advance of this year’s deadline than ever before, largely because there is a larger gulf between pretenders and contenders than in seasons past (indeed, there are still six winless teams, which is the highest number at this point in the season since the 1970 merger).

One of this year’s still-winless clubs, the Broncos, are reportedly more open to moving veteran pieces than they were last year, as La Canfora writes in a separate piece, with Derek Wolfe, Chris Harris, and Emmanuel Sanders all generating interest. Wolfe could make sense for Baltimore, and the Saints are expected to renew their pursuit of Sanders. Even Von Miller could be on the block, per La Canfora, especially since all of his major bonuses and guarantees have already been paid. Miller, 30, is reportedly open to a change of scenery at this point, but Ian Rapoport of the NFL Network says the Broncos will not trade him (video link). However, the other players mentioned above could be available if Denver continues to scuffle.

But while Denver may be willing to talk shop, rival GMs are skeptical that the 0-4 Bengals, led by old-school owner Mike Brown, will be amenable to moving big-name vets despite their fading fortunes. La Canfora’s sources say Cincinnati could net a first-round pick for WR A.J. Green if the acquiring club is able to work out a new contract with him as a condition of the trade (and if Green recovers from his foot injury soon). The Patriots and Saints could make a push for Green or Bengals tight end Tyler Eifert, and Cincy could also swing deals for players like Geno Atkins and Carlos Dunlap if the club is willing to listen to offers.

Like fellow winless outfits Denver and Cincinnati, the Jets could be active in shopping veteran players in advance of the deadline. La Canfora specifically names Kelechi Osemele and Leonard Williams as players who could be on the move, though he says there has been no trade chatter surrounding Le’Veon Bell at this point.

Finally, though the 0-4 Redskins have been steadfastly refusing to trade Trent Williams, some believe that the team will relent at some point and will ship Williams to a contender in need of O-line help.

Von Miller turned 30 this offseason and will soon start his ninth NFL season, but it doesn’t look like the Broncos will need to consider making plans for a near-future Miller retirement. Denver’s all-time sack leader said (via USA Today’s Lila Bromberg) he wants to play long enough to make a run at Bruce Smith‘s NFL record. That will be quite difficult, with Miller (98 sacks) having averaged 12.25 sacks per season (a figure weighed down by his 2013 suspension-shortened slate) and Smith having recorded 200 during his 19-year career. Miller would need to average 10.2 sacks over the next 10 seasons to get there. However, Miller sits second among active NFLers in sacks — trailing only Terrell Suggs (132). While the odds are against him eclipsing the Smith standard that has stood for 16 years, it is notable the likely Hall of Fame-bound pass rusher plans on playing for several more seasons. Three seasons remain on Miller’s six-year, $114.1MM contract.

Here’s the latest from the West divisions, shifting to the NFC West:

With the 2018 league year officially underway, a number of teams have reworked player contracts in order to create additional cap space. Here’s what moves clubs have made today: