The Redskins announced that they have released linebacker Adam Hayward. Prior to being cut loose, Hayward was slated to enter his third season in D.C. 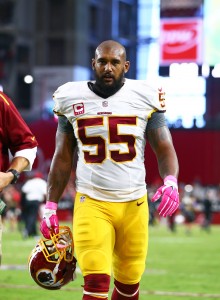 Hayward, 32, spent his entire career with the Buccaneers before signing with the Redskins in March of 2014. Upon joining his new team, Hayward was named special teams captain. Unfortunately, he suffered a season-ending leg injury against the 49ers midway through the season. In 2014, the former sixth-round pick played almost exclusively on special teams, appearing in just 14 defensive snaps.

Hayward was then sidelined for the entire 2015 season when he tore his ACL during the preseason. As shown on Roster Resource, Washington still has Will Compton, Steven Daniels, Carlos Fields, Mason Foster, Terence Garvin, Perry Riley Jr., and Martrell Spaight in its inside linebacker group. With Hayward out of the picture, the Redskins 90-man roster is down to 89 players.

We have known for some time that the Jets are looking to trade Muhammad Wilkerson, who is an immensely talented but also highly expensive and potentially movable asset. Wilkerson, who has not yet signed his franchise tender, is not expected to show up tomorrow for the start of New York’s voluntary offseason program, as we learned last night, and Rich Cimini of ESPNNewYork.com does not expect him to sign the tender anytime soon.

But Cimini believes that the only way a Wilkerson trade makes sense is if the team is able to use him to land one of the top two quarterbacks in this year’s draft, Carson Wentz or Jared Goff. And now that the Rams have grabbed the No. 1 overall selection from the Titans, the only way that the Jets can assure of themselves of Wentz or Goff is if they swing a deal with the Browns, who hold the No. 2 overall pick. The Browns, who of course have a number of roster holes to fill and a good deal of cap space, may be willing to swap first-round picks with the Jets, while netting Wilkerson and a few more draft picks in the process, and then select a quarterback from the second-tier of this year’s class of signal-callers. The question, though, is whether Wilkerson would want to sign a long-term deal with the Browns, which is probably not the case, even though the Browns could meet his contractual demands.

This is just my speculation, but unless the Browns select a player other than Wentz or Goff with the No. 2 overall pick–assuming of course, that the Rams take one of the two with the No. 1 selection–then it’s hard to imagine the Jets moving Wilkerson. As Cimini writes, it does not make much sense for Gang Green to use Wilkerson as a trade chip to move up to select a player like Memphis QB Paxton Lynch, who may fall to the Jets anyway and who is not a considerably more promising prospect than, say, Michigan State’s Connor Cook.

SATURDAY, 12:05pm: Washington has put Hayward on the IR, reports Mike Jones of The Washington Post (via Twitter).

FRIDAY, 10:00am: Washington linebacker and special-teamer Adam Hayward left Thursday’s game against the Lions with a knee injury, and according to John Keim of ESPN.com, Hayward has been diagnosed with a torn ACL. The injury will land Hayward on IR, sidelining him for the entire 2015 season.

A longtime reserve linebacker for the Buccaneers, Hayward signed a three-year contract with Washington before the 2014 season. In his first year with the club, the former sixth-round pick played almost exclusively on special teams, appearing in just 14 defensive snaps. In kick and punt coverage, Hayward was a key contributor for Washington, accumulating eight tackles before a leg injury forced him to miss the last five weeks of the season.

It’s the second big blow for Washinton’s special teams, as the team also lost tight end Niles Paul to a season-ending injury earlier this month. With Hayward and Paul out for the year, fullback Darrel Young figures to head up the special teams unit heading into the season.

In other injury news out of Washington, Robert Griffin III left last night’s game with a concussion, as Zac Boyer of the Washington Times writes. However, Mike Jones of the Washington Post tweets that the concussion isn’t believed to be severe, and it’s possible RGIII could return to the field next week against Baltimore, so it sounds like his regular-season availability isn’t in jeopardy for now.

We don’t pass along news on every injury here at Pro Football Rumors, but we’ll keep tabs on those injuries that may be serious enough to warrant a player heading to IR, or his team making a roster move in order to make up for his absence.

This list will be updated as more information becomes available, as always, with news added to the top of the list as it trickles in.

The upcoming season has long been targeted as the year the Rams will be legitimate contenders. Accordingly, the team has “margin for error next to zero in the NFL draft,” says ESPN.com’s Nick Wagoner. The Rams have been quiet in free agency, instead relying on the development of their young team and the potential to bolster the roster with draft picks, including two in the top 13, the first of which (No. 2 overall) is on the auction block. Wagoner asserts the time is now for the team to close the gap on Seattle and San Francisco, especially in the trenches. “…the most glaring difference between the Rams and their NFC West foes last year was how overmatched they were on the offensive line,” says Wagoner, who mentions tackles Greg Robinson (Auburn) and Jake Matthews (Texas A&M) as potential plug-and-play, impact options.

Other morning news and notes in the NFC:

4:29pm: Linebacker Adam Hayward has agreed to a three-year deal with the Redskins, reports Adam Schefter of ESPN.com (via Twitter). The 29-year-old Hayward spent his entire career with the Buccaneers before testing the market this offseason. He has only started 13 games in Tampa Bay since his rookie year in 2007.