Former NFL wide receiver Miles Austin is joining the 49ers as an offensive quality control coach, tweets Field Yates of ESPN.com. Austin, 34, spent the majority of his playing career with the Cowboys and then joined the Dallas scouting staff after announcing his retirement in 2016. The Cowboys interviewed Austin for their vacant wide receivers job last offseason, but that gig ultimately went to Sanjay Lal. Austin will join recent retirees Wes Welker (receivers) and DeMeco Ryans (inside linebackers) on the San Francisco staff.

The Eagles have parted ways with veteran wide receiver Miles Austin, tweets Howard Eskin of FOX 29 in Philadelphia. Austin will have to clear waivers before becoming a free agent, but he’s unlikely to be claimed, given the money left on his deal and his performance this season.

Austin, who signed a one-year, $2.5MM contract with the Eagles in March, has been a disappointment for the team this season. Despite seeing a decent amount of playing time, the ex-Cowboy has hauled in just 13 of 31 targets, for 224 yards and a touchdown. He was inactive for his final game with the Eagles.

While Philadelphia could add another receiver to the roster to replace Austin, the team still has plenty of depth at the position on the 53-man squad. The move could result in a few extra snaps for players like Josh Huff and Jonathan Krause.

Jeff McLane of The Philadelphia Inquirer says that coaches like the Eagles‘ Chip Kelly, who exercise control over both the football and business side of a team’s operations, frequently succumb to the pressures and difficulties of absolute power. Bill Belichick has managed to make it work in New England, but he is the exception to the rule.

Philadelphia’s recent saga with Evan Mathis demonstrates just how difficult Kelly’s position can be. As McLane writes, “Kelly received nothing in return for a Pro Bowl guard who had little leverage and claimed that he was prepared to report and perform without being a disruption – as he did last year.” And if the decision to release Mathis turns out to be a poor one, Kelly will have no higher authority to share the blame.

Although players will typically side with their teammates when asked about contract difficulties, the responses to Mathis’ release suggest that Kelly is still commanding respect in the locker room even as he takes full control of the team’s personnel affairs. McLane says that Mathis’ former teammates offered “vociferous support of management” after Mathis was cut, and tight end Zach Ertz had this to say: “I understand where [Mathis is] coming from. In his mind he thinks he’s underpaid, so he’s got to do what he thinks is best. But we want people here that are going to trust the process.”

Of course, there will be many more difficult personnel decisions to be made, decisions that will truly test whether Kelly can first construct a talented roster and then get that roster to win football games. It is a decidedly tall task, and one that most have been unable to meet.

Now let’s take a look at some links from around the league:

MONDAY, 4:23pm: The Eagles and Austin have agreed to a one-year deal worth $2.3MM, with another $700K available in incentives, tweets Rapoport. Presumably, the agreement is still pending a physical, which isn’t necessarily a given, considering Austin’s history of health issues.

10:40am: Assuming all goes well with his visit and his physical this week, Austin is expected to sign a contract to join the Eagles, according to Rapoport (via Twitter).

9:40am: One former Cowboys offensive playmaker has notably joined the Eagles this offseason, as DeMarco Murray made the jump from Dallas to Philadelphia. Now, the Eagles are eyeing another free agent who used to play for their division rivals. According to Ian Rapoport of NFL.com (via Twitter), veteran wideout Miles Austin is set to visit Philadelphia this week.

Austin, of course, isn’t the same sort of impact player Murray is at this stage of his career. However, he had a decent bounce-back season in Cleveland last year, catching 47 balls for 568 yards and two touchdowns in 12 games. The 30-year-old has racked up 348 catches for more than 5,000 yards during his nine-year NFL career, earning a pair of Pro Bowl nods during his time with the Cowboys.

The Eagles are in the market for receiving help after seeing Jeremy Maclin leave for Kansas City earlier this month. Jordan Matthews appears poised to take on a more significant role for the club in 2015, and Chip Kelly has praised the wide receiver depth in this year’s draft class. Still, besides Matthews, Riley Cooper is the only wideout currently under contract who has more than 10 career receptions, so Philadelphia could use another veteran.

Browns wide receiver Miles Austin says he wants to return to the Browns in 2015 after his contract is up, according to Mary Kay Cabot of The Plain Dealer (via Twitter). Austin enjoyed his year in Cleveland even though his season ended prematurely. The veteran suffered a lacerated kidney during the team’s Week 13 game in Buffalo which led to him being placed on IR.

The Browns signed Austin in May after they lost Josh Gordon to a (then) season-long suspension and neglected to take a wide receiver in the draft. General Manager Ray Farmer made it known that he would target affordable veteran help instead and the former Cowboy was a part of that plan as he was signed to a modest one-year deal with a $1.7MM base.

The 30-year-old came to the Browns with two Pro Bowl appearances on his resume but, as was the case in years past, the injury bug slowed him down significantly. Austin appeared in 12 games for the Browns in 2014, recording 47 receptions for 568 yards and two touchdowns.

10:34am: The Browns have officially confirmed the addition of Draughn, announcing that wideout Miles Austin has been placed on injured reserve to accommodate the signing (Twitter link). Austin sustained a kidney injury during the team’s Week 13 game in Buffalo.

10:29am: As we wait for word on which quarterback will start for the Browns against the Colts this weekend, there’s some more minor news out of Cleveland to pass along. According to Adam Schefter of ESPN.com (via Twitter), the Browns have signed running back Shaun Draughn to a one-year contract.

Draughn, who turns 27 on Sunday, played for the Chargers earlier this season when San Diego’s backfield was hit hard by injuries, earning 10 carries in an October game against the Jets. However, Draughn wasn’t particularly effective in his limited action, rushing for just 19 yards on those 10 attempts, and was cut by the team about a month ago. The former Chief and Raven has accumulated 73 career carries for 254 yards and two TDs, as well as 24 receptions for 158 yards.

The Browns cut one veteran running back last month, parting ways with offseason signee Ben Tate and opening the door for rookies Isaiah Crowell and Terrance West to carry the load in Cleveland. However, neither player had a good game on Sunday in Buffalo, with Crowell totaling just 29 yards on 17 carries, while West lost a key fumble in the second half that was returned for a touchdown. Draughn is unlikely to push for a featured role in Cleveland, but his presence could help provide some stability in a backfield that features multiple rookies, including third-string back Glenn Winston.

The Browns have a full 53-man roster, so for Draughn’s signing to become official, the team will have to make a corresponding move.

MAY 21: On his one-year deal with the Browns, Austin received a $300K signing bonus to go with a $1.7MM base, for an overall value of $2MM, tweets Ian Rapoport of NFL.com.

MAY 15: After not picking up a wideout in last week’s draft, the Browns have made a move to bolster a potentially thin receiving corps. Cleveland has agreed to terms with former Cowboy Miles Austin, according to the club’s official Twitter account. 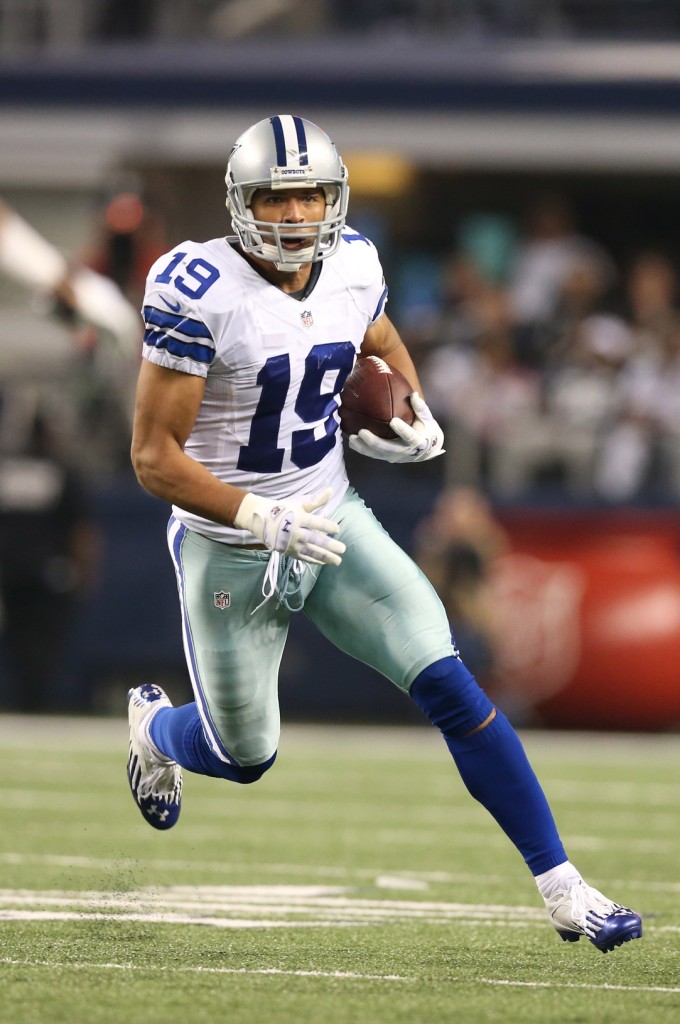 The Browns had been expected to target receivers last week even before word broke that Josh Gordon could be facing a season-long suspension for violating the league’s drug policy. However, GM Ray Farmer downplayed the urgency of picking up receiving help in the draft, pointing to trades and free agency as ways the club could add short-term, inexpensive options. There are rumblings that the team may also bring former Bear Earl Bennett aboard, though that has not yet been confirmed.

Austin, who turns 30 next month, earned a pair of Pro Bowl berths earlier in his career, hauling in 81 passes for 1,320 yards and 11 touchdowns in 2009 and 69 passes for 1,041 yards and seven touchdowns in 2010. However, he has been slowed by off-and-on hamstring issues in recent years and became a cap casualty earlier this offseason when he was released by the Cowboys. Dallas head coach Jason Garrett suggested earlier this week that the door wasn’t closed on a potential Austin return, but it always seemed as if the Cowboys were moving on from the veteran.

Although the potential loss of Gordon is a significant blow to the Browns and whichever quarterback wins the competition between Brian Hoyer and Johnny Manziel, the team has been active in fortifying its receiving group in free agency. Austin becomes the third veteran receiver to sign with the Browns since the season ended, following in the footsteps of Andrew Hawkins and Nate Burleson.

Terms of the deal have yet to be disclosed, but I’d expect a one-year contract worth the minimum or close to it, likely with some bonus money.