Antoine Bethea partook in a November workout with the Ravens but did not end up playing this season. The veteran safety will not opt to circle back to the NFL in 2021, announcing his retirement instead (Twitter link).

Despite coming into the NFL as a sixth-round pick from a Division I-FCS program (Howard), Bethea proved to be immediately reliable and incredibly durable. He started 16 games in 10 of his 14 seasons and was a backup for just nine games in his career.

Bethea finished with 25 career INTs and ventured to three Pro Bowls — two with the Colts and one with the 49ers — and started in 13 playoff games during his Indianapolis tenure. During his 200-start career, Bethea managed an impressive eight 100-plus-tackle seasons. He finished with 110 stops during his age-35 season with the Giants. Bethea also notched four postseason interceptions, including two as a rookie during the Colts’ Super Bowl XLI championship campaign.

Antoine Bethea will have a chance to play a 15th NFL season. The veteran safety is working out for the Ravens, Field Yates of ESPN.com tweets.

The Ravens currently have starting safety DeShon Elliott on their reserve/COVID-19 list, and defensive back Jimmy Smith did not practice this week because of a back injury. This could open the door for Bethea, who has logged more starts at safety than almost anyone in NFL history.

Bethea wrapped up a one-year Giants contract in 2019, starting 16 games in his age-35 season. This came after he started 16 games for the Cardinals in 2018. Overall, Bethea has started 200 games since being a sixth-round Colts draftee in 2006. Bethea was a Pro Bowler during Jim Harbaugh‘s final season with the 49ers (2014). He will soon become acquainted with John Harbaugh.

COVID-19 protocols would prevent Bethea from practicing as a Raven until next week. But the 14-year veteran could begin taking coronavirus tests with the team Friday in order to begin work late next week. The Ravens released Earl Thomas during training camp and have used younger safeties this season. Bethea would be a step in a different direction, should the team agree to bring him aboard.

The Giants are signing veteran safety Antoine Bethea, according to former teammate Reggie Wayne (on Twitter). The news has been confirmed by Paul Schwartz of the New York Post (Twitter link).

Bethea, entering his 14th NFL season, will be 35 by the time Giants training camp begins. He profiles as a cheap replacement for Landon Collins, whom New York declined to use its franchise tag on then watched defect to Washington.

Despite his age, Bethea was a full-time Cards starter in 2018. After starting for the 2006 Super Bowl champion Colts as a rookie, the former sixth-round pick has previously played for the Colts, 49ers, and, most recently, the Cardinals. Over the course of his career, he’s made three Pro Bowls, with the most recent one coming in 2014 with SF.

While Bethea is nearing the end of a nice career, he has produced in recent years. In 2017, his first year in Arizona, Bethea intercepted a career-high five passes. Last season, he registered a career-best three sacks. Bethea will trek to the Giants with 24 career interceptions.

The safety market was absolutely flooded this year, leading many to believe that Bethea would have to wait things out before finding a home. That wasn’t the case, as Bethea quickly found a landing spot with the G-Men. This move helps patch up a spot, but the Giants will need more help in their secondary given the current personnel. 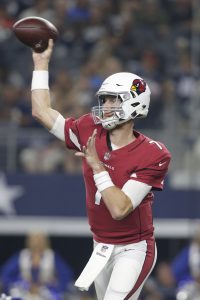 Glennon’s Arizona stay lasted one year; Bethea was a Cardinal for two seasons but will not have the chance to play for a third Cardinals regime. The veteran safety signed a three-year deal with the then-Bruce Arians-led Cards and stuck around for Steve Wilks‘ lone season. Kliff Kingsbury‘s team will go in a different direction.

These transactions will create nearly $6MM in cap space for the Cards, ballooning their figure north of $43MM.

This represents the second straight offseason the once-coveted Mike Glennon has been released. The Bears cut him after a one-season stay, and that led to him joining the Cards. Glennon played in two games last season, working behind Sam Bradford and then Josh Rosen, but only threw 21 passes. The former third-round pick is now back on the backup-QB market.

Linked to a possible Rosen trade, in advance of a Kyler Murray draft pick, the Cards have one less quarterback on their roster.

Bethea’s career has now lasted 13 years. He will be 35 by the time training camps begin. Despite his age, Bethea was a full-time Cards starter in 2018. After starting for the 2006 Super Bowl champion Colts as a rookie, the former sixth-round pick has played for three teams — a three-year stint with the 49ers coming in between Indianapolis and Arizona stays — and made three Pro Bowls, the most recent one coming in 2014 with San Francisco. But with so many safeties available this year, it is fair to wonder if Bethea has played his final game.

The Cardinals are just a win away from ending the 2017 season at .500, but the team will have to beat the playoff contending Seahawks without one of their starting safeties. Head coach Bruce Arians revealed that veteran defensive back Antoine Bethea tore his pectoral muscle against the Giants in Week 16 and will be out for their regular season finale this Sunday, reports Kent Somers of AZCentral Sports (Twitter link). Somers adds that Bethea might need surgery because of the injury, but it wasn’t a definite at this point. The team has promoted linebacker Edmond Robinson in a corresponding move.

At 33 years old, Beathea was having an excellent 2017 campaign, leading the team with a career-high five interceptions in his 12th year in the league. He also was rated highly by the metrics at Pro Football Focus, coming in as the 12th best safety in football through 16 weeks, according to the website.

It would be tough to walk away from the game in the offseason given his recent play, but it’s something that you would think the defensive back would likely consider because of his age, in addition to the recovery process that comes with an injury as serious as this one.

Arizona will likely turn to rookie Budda Baker to replace Bethea on Sunday. Baker has been spectacular on special teams this season. The team’s 2017 second round pick was voted into the Pro Bowl as the number one special teams player in the NFC.

The Cardinals have reached agreement with strong safety Antoine Bethea on a three-year deal, a source tells Kent Somers of The Arizona Republic (on Twitter). With that signing, the Cards have replaced the departing Tony Jefferson.

Bethea will see a three-year commitment despite being set for his age-33 season. The 49ers cut the 12th-year veteran earlier this week, and instead of having another role on a rebuilding team, Bethea joins a veteran roster that is one year removed from being on the Super Bowl precipice.

The three-time Pro Bowler has a Super Bowl ring already, earning it as a full-time rookie starter for the 2006 Colts, and brings plenty of experience to Arizona’s secondary. Bethea has started all 162 games he’s played since entering the league as a sixth-round pick. Bethea made his most recent Pro Bowl in 2014 for the 49ers. He joins a star-powered secondary behind Patrick Peterson and alongside Tyrann Mathieu.

This agreement comes after the Cardinals moved quickly to extend the franchise-tagged Chandler Jones.

After spending the past three years in San Francisco, safety Antoine Bethea will hit the open market. The 49ers have announced the release of the 32-year-old. Already flush with cap space, the 49ers will add another $5.75MM in moving on from Bethea. 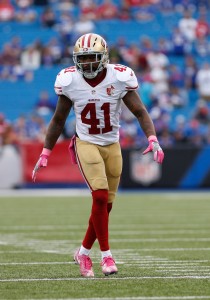 An 11-year veteran who spent the first eight seasons of his career in Indianapolis, Bethea has impressively started in all 162 of his appearances since entering the NFL in 2006. He’s also a two-time Pro Bowler, with one nod having come with San Francisco in 2014, and has posted 16-game seasons in eight of the past nine campaigns. The lone exception was 2015, when Bethea only logged seven appearances. He returned to health last year to log 110 tackles and a forced fumble, though his performance ranked a below-average 66th among Pro Football Focus’ 89 qualified safeties.

Bethea doesn’t have age on his side, but given his durability and playmaking prowess (19 career picks), he could draw interest on the market. He’ll join a group of free agent safeties that also includes Tony Jefferson, Duron Harmon, Barry Church and ex-Colts teammate Darius Butler, among others.

Within his latest Monday Morning Quarterback column, Peter King of TheMMQB.com passes along several noteworthy tidbits, primarily related to the upcoming draft. Let’s dive right in and round up the highlights….