Jets rookie linebacker Blake Cashman is done for the year with a shoulder injury, a source tells Brian Costello of the New York Post (on Twitter). Cashman suffered the injury in practice on Thursday and the severity of the shoulder malady was instantly apparent to team doctors. 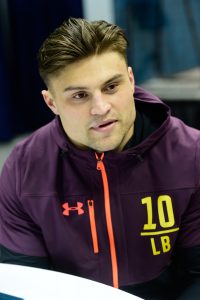 Cashman, a fifth-round pick out of Minnesota, slipped down the draft boards due to a history of shoulder trouble in college. This year, he got an opportunity to play while C.J. Mosley was out with a groin injury. Mosley still has at least five weeks to go before he can return, so the Jets are left especially thin in the LB group.

In other Jets news: safety Jamal Adams is fed up with the team after they discussed possible trades for him this week. The deadline is now in the rear view mirror, but Adams isn’t quite sure about whether he wants to roll with Gang Green beyond 2019.