Brian Robison is hanging them up. The longtime Vikings defensive end is officially retiring from the NFL today, the team announced in a video they posted to Twitter.

In the video, which is worth a watch, Robison reflects on his career and his journey in Minnesota. The 2007 fourth round pick spent all 11 years of his career with the Vikings before the team cut him last September. Adam Schefter of ESPN tweeted that Robison signed a one-day contract with Minnesota to officially retire as a member of the team.

Robison will finish his career with 60 sacks, which has him tied for ninth on the franchise’s all-time list. Robison played only a rotational role his first few years in the league, but then blossomed into a full-time starter. He was very reliable, and only missed one start from 2011 through 2016. In 2017 he had his role reduced to again become a reserve, and he was released at the beginning of last season.

Robison will turn 36 in a couple of days and he spent the entire 2018 season out of football, so his decision to call it quits isn’t too surprising. A Texas product, Robison had a run of three straight years with at least eight sacks from 2011 through 2013. Robison’s emotional thank you to Vikings fans in the tribute video show why he became such a fan favorite during his time in Minnesota.

Another veteran defender is set to look for a new gig. ESPN’s Adam Schefter reports (via Twitter) that the Vikings are releasing defensive end Brian Robison.

The 2007 fourth-round pick had spent his entire career in Minnesota, missing only a pair of regular season games during his 11 years in the NFL. After having been a starter from 2011 through 2016, Robison was demoted to a backup role last season.

In 15 games (one start), the 35-year-old compiled only 20 tackles, his lowest total since 2010. However, despite his limited snaps, the veteran still managed to get at the quarterback, as he finished the year with four sacks. Robison will finish his career in Minnesota tied for fifth in franchise history with 60 career sacks.

With Robison out of the picture, the team will now presumably turn to fourth-round rookie Jalyn Holmes as the primary backup to Danielle Hunter and Everson Griffen.

Last month, it was announced that Vikings defensive end Brian Robison was taking a pay cut to stay with the team in the final year of his contract. The longtime Viking was scheduled to make $3.5MM initially, but his pay cut reduced his base salary to $1.015MM plus a $90K workout bonus.

Now Robison, who has been with the Vikings since being drafted by the team in the fourth round back in 2007, appears ready to hang up his cleats. He recently told Chris Tomasson of the St. Paul Pioneer Press that he’ll “more than likely” retire after the 2018 season.

If the 2018 season is indeed Robison’s last in the NFL, it will be the end to an unusually long run with a single team for a role player. Normally only a star player would wind up playing for the same team for 12 seasons, but Robison has carved out a similar situational pass-rushing role with the Vikings year after year through multiple coaching staffs and front offices. He has 60 sacks, 19 passes defended, and 13 forced fumbles throughout his career, only missing three of a possible 176 games since entering the league.

Here’s more on the Vikings:

Vikings defensive end Brian Robison accepted a pay cut in order to return for another season, according to Ben Goessling of the Star Tribune (on Twitter). Robison was initially scheduled to make $3.5MM this season, but he’ll now make a base salary of just $1.015MM, plus a $90K workout bonus.

[RELATED: Dalvin Cook Ahead Of Schedule]

Robison’s pay cut opens up $2.38MM in new cap space for Minnesota. Somehow, after an offseason which saw the additions of quarterback Kirk Cousins and defensive lineman Sheldon Richardson, the Vikings have $17.1MM in cap room. The Vikings will try to use that flexibility to extend standouts like linebacker Anthony Barr, wide receiver Stefon Diggs, and defensive end Danielle Hunter.

After the season, Robison wouldn’t guarantee that he would return for another year. Last week, he affirmed that he would come back for his 12th campaign. Although he started in six straight seasons for the Vikings, he’ll come off of the bench for a second consecutive year in 2018 as he supports Everson Griffen and Danielle Hunter.

Despite playing in a reserve role, Robison still logged 642 snaps in 2017.

Brian Robison has decided to play at least one more season. The Vikings defensive end and the franchise’s longest-tenured active player announced (via Twitter) on Monday he will return to the team.

The 2007 draftee wavered on a previous stance that indicated he would play through the 2018 season, commenting after the Vikings’ season concluded that it wasn’t a surefire proposition he would return. Now, the 35-year-old defender will try for another season in Minnesota.

Having played in all but three games since the start of the 2007 season, Robison ranks fifth in Vikings history with 60 sacks. He stands to occupy a depth role again on Minnesota’s defensive line, being stationed behind Everson Griffen and Danielle Hunter on the depth chart. Robison moved back into a bench role after being a full-time starter from 2011-16. Nevertheless, Robison enjoyed a busy workload last season, playing 642 snaps.

However, the Vikings also drafted two defensive ends this year — in fourth-rounder Jalyn Holmes and sixth-rounder Ade Aruna — so the franchise is preparing for Robison’s eventual departure. Robison stands to make $3.2MM in base salary as a part of his revised contract.

The Vikings came just short of reaching the Super Bowl this year and it’s not clear whether Brian Robison will be a part of the redemption effort next season. In a radio interview on Monday, the defensive end said that he is pondering retirement.

“I think that’s a decision I’m going to have to make here over the next few weeks,” said Robison (via La Velle E. Neal III of the Star Tribune). “I think I need to sit down with my wife and talk about it and maybe sit down with [General Manager Rick Spielman] and just think it out. You don’t want to make any spur-of-the-moment decisions just because your emotions are all over the place. You want your mind to calm down and think things through. It is a very important decision.”

Last spring, Robison inked an extension with the team to take him through the 2018 season. At the time, he said that he would retire after the ’18 campaign. Now, those plans might be accelerated.

Robison will turn 35 in April and the longtime starter is showing signs of decline. After starting nearly every game for Minnesota from 2011-2016, the veteran made just one start in 2017. His four sacks and 20 tackles were his lowest posting since 2010 and his 53.4 overall score from Pro Football Focus portrayed him as a below-average edge defender.

Robison is due a base salary of $3.2MM in 2018 with $1.25MM guaranteed, plus $200K in per-game roster bonuses and $100K through a workout bonus. Even if Robison decides to continue playing, the team may choose to move on from him and save ~$2MM.

Matt Asiata‘s visit with the Lions occurred this weekend, but the team is not ready to offer the former Vikings starter a contract yet, Dave Birkett of the Detroit Free Press tweets. Birkett adds that the workout went well for the first-time UFA running back, but the Lions are currently going with their holdovers. Detroit’s present backfield houses Ameer Abdullah, Theo Riddick, Dwayne Washington and Zach Zenner. The Lions did not draft a running back. An Asiata pact would seemingly stand in the way of the Lions adding LeGarrette Blount. One of the suitors linked to the now-uniquely positioned free agent, the Lions have a need for a reliable runner after Abdullah has failed to stay healthy. The unavailability of he and Riddick, who is already a passing-down specialist, hurt the Lions last season. Asiata has not drawn any other known interest to this point.

Here’s more from Detroit and the latest from some of the Lions’ chief rivals.

Brian Robison Plans To Retire After 2018

Brian Robison signed a contract extension that could allow him the opportunity to retire as a Viking, the same way Chad Greenway did. As of now, the veteran defensive end does not plan to play beyond that contract. 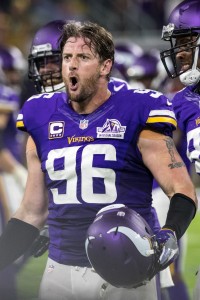 This will be Robison’s 11th season, and the 34-year-old defender told Chris Tomasson of the St. Paul Pioneer Press the 2018 season will likely be his last.

“I really do believe that probably at the end of those two years, it will be it,’’ Robison said. “It’ll be about my time to call it (a career), but we’ll see how I feel when I get there. … But I would say that more than likely, that will probably be the time that I’m going to have to lay things to the side and get ready for life after football.”

Having arrived in the same draft class with Adrian Peterson, Robison is set to outlast the future Hall of Famer in purple. He is now the longest-tenured player on the team after Greenway retired. Robison’s contract now runs through 2017, with an overall pay reduction being agreed upon in exchange for an extra year and more guaranteed dollars. Robison expected the Vikings to call about a renegotiation, per Tomasson, and the result gave Minnesota $1.8MM in additional cap space.

“This solidifies me to be able to retire as a Minnesota Viking,” Robinson said, via Tomasson. “… I had a long talk with Rick Spielman. We were on the phone for probably 45 minutes, just discussing it.”

The former fourth-round pick registered 7.5 sacks last season and made 16 starts for the Vikings. Since commandeering a starting end job in 2011, Robison has missed just one start. Robison acknowledged third-year player Danielle Hunter could be in position to snare his starting job at some point in the near future, but the veteran’s skill set could probably be used as a pass-rushing-specific capacity in that event.

Defensive end Brian Robison has agreed to a contract extension with the Vikings, Field Yates of ESPN.com tweets. In essence, it all amounts to a pay cut.

Robison was previously slated to make up to $5.6MM for 2017, with no guaranteed money. Now, he’ll see his base salary go from a non-guaranteed $5.3MM to a fully guaranteed $3.9MM. He can add $100K through a workout bonus, but he forfeits $200K in per-game roster bonuses.

Robison, 34 in April, had 28 total tackles and 7.5 sacks in 2016. Even at his age, Robison has shown to be both effective and durable. He has averaged 7.0 sacks per season since 2011 and appeared in all but one regular season game for the Vikings during that time. The new deal could allow the lifetime member of the Vikings to retire in purple. Then again, as he continues to rack up sacks, Robison might want to continue playing beyond 2018.