The Cowboys are adding reinforcements as the Ezekiel Elliott saga drags. On Monday, they promoted running back Jordan Chunn to the 53-man roster. His roster spot will be freed up by placing Connor McGovern on injured reserve.

If Elliott doesn’t show for the season opener, Chunn would serve as the Cowboys’ No. 3 running back behind Tony Pollard and Alfred Morris. Dallas will also have fullback Jamize Olawale on hand to clear the way.

McGovern, a third-round pick, suffered a setback in August that will require some extra time to heal. If his torn pectoral muscle cooperates, he could still be eligible to return for the second half of the season, per league rules.

The Cowboys selected offensive lineman Connor McGovern in the third round of this year’s draft with the expectation that he could compete for the team’s starting left guard job. However, Todd Archer of ESPN.com says that McGovern, who sustained a partially torn pectoral muscle during the offseason program and who participated in just two training camp practices, has suffered a setback. 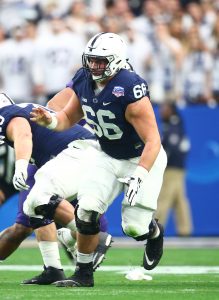 It’s presently unclear if McGovern will need surgery or if he can simply rehab the injury. According to David Moore of the Dallas Morning News, McGovern is dealing with a smaller strain of his pectoral muscle separate from the earlier tear (Twitter link). Both Moore and Archer suggest that the Cowboys could include McGovern on the initial 53-man roster, which would then allow them to put him on IR with the possibility of bringing him back later in the season, but a source tells Calvin Watkins of the Dallas Morning News that the team is considering keeping McGovern on the shelf for his entire rookie season (Twitter link).

After all, Dallas does have the offensive line depth to withstand a redshirt season from its Day 2 draft choice. Even with McGovern’s uncertain status, Charean Williams of Pro Football Talk writes that the Cowboys are open to trading players from either its O-line or D-line (or perhaps both).

“We do get calls on both offensive and defensive lines,” executive vice president Stephen Jones said yesterday. “We’ve made that a priority over the years, and it’s a strength of ours, and some teams are interested in it. Yeah, I think there’s a possibility for sure that we could move somebody.”

It seems that Dallas will go into the season with Connor Williams as the starting LG. If the Cowboys do swing a trade, Williams suggests that they would want a draft pick, not a player, in return.

The Cowboys have signed third-round pick Connor McGovern, according to David Moore of the Dallas Morning News (on Twitter). With that, the Cowboys have inked every draft pick in their 2019 class.

McGovern isn’t practicing with the team during its mandatory minicamp due to a pectoral strain. However, once he’s healthy, he says he’ll try to crack the team’s starting lineup.

Even if McGovern isn’t a starter this year, he could provide quality support behind Connor Williams and Zack Martin at the guard spots. Eventually, Williams may be shifted to tackle and current right tackle La’el Collins may depart after this year, his final season under contract, so there’s a clear path for McGovern to start at some point. In theory, strong camps from Williams and McGovern could give Dallas enough confidence to move Collins in a trade and add some draft picks for 2020.

Here’s the full rundown of the Cowboys’ class, via PFR’s tracker: