The Buccaneers have signed safety Darian Stewart, according to Greg Auman of The Athletic (on Twitter). When completed, it’ll be a one-year deal at the veteran’s minimum salary, plus incentives, Auman hears. 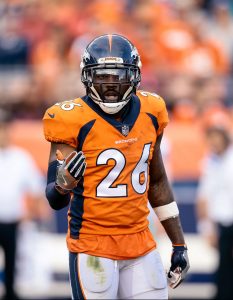 Stewart, 31, has spent the last four years as a starter for the Broncos. With the Bucs, he’s expected to provide veteran guidance to a young secondary group.

The Broncos released Stewart in March in order to save roughly $3.6MM against the cap. Prior to that, the veteran started in nearly all of his 58 games for the Broncos and recorded a forced fumble and a sack in the team’s Super Bowl 50 victory.

Stewart saw some time at cornerback and free safety in ’17, but he played mostly at strong safety last year. He graded out as just the No. 77 ranked safety in the NFL in 2018, according to Pro Football Focus. His 59.6 overall score was a massive step back from his first two seasons in Denver, which included a Pro Bowl nod in 2016.

The Colts met with Stewart earlier this summer but did not sign him.

Free agent safety Darian Stewart met with the Colts this week, according to Ian Rapoport of NFL.com (on Twitter). This comes on the heels of a workout for Johnathan Cyprien, so it appears the Colts are in the market for help in the secondary. 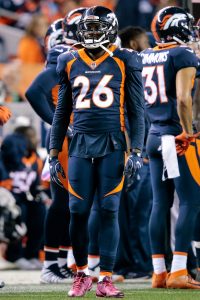 Third-year safety Malik Hooker is working his way back from ACL and MCL tears while fellow safety Clayton Geathers is still rehabbing his surgically-repaired knee. At minimum, Stewart could give the Colts some practice field depth. At maximum, the former Pro Bowler could be a tremendous value addition.

The Broncos released Stewart in March in order to save roughly $3.6MM against the cap. Prior to that, the veteran started in nearly all of his 58 games for the Broncos and recorded a forced fumble and a sack in the team’s Super Bowl 50 victory.

Stewart saw some time at cornerback and free safety in ’17, but he played mostly at strong safety last year. He graded out as just the No. 77 ranked safety in the NFL in 2018, according to Pro Football Focus. His 59.6 overall score was a massive step back from his first two seasons in Denver, which included a Pro Bowl nod in 2016.

The Broncos released defensive back Darian Stewart, according to an announcement from Stewart himself. On Wednesday, the veteran took to Instagram to bid farewell to his fans in Denver.

“Broncos country thank you all for the love you showed me and my family these past four years,” Stewart wrote. “But, it’s time for me to move on and I’m looking forward to the next chapter. I still got a whole lotta 🏈 left in me so I’ll see y’all real soon.”

Stewart was due roughly $5MM for 2019. By releasing him, the Broncos will save roughly $3.57MM against the cap with $2.8MM in dead money left over.

The Broncos signed Stewart to a two-year deal worth $4.25MM in 2015 and he quickly proved his worth. Stewart started in nearly all of his 58 games for the Broncos and recorded both a forced fumble and a sack in the team’s Super Bowl 50 victory.

Stewart saw some time at cornerback and free safety in ’17, but he played mostly at strong safety last year. This figures to be a crowded safety market, which is a bit of a double-edged sword for Stewart. Plenty of teams are in need of safeties, but Stewart will be a lower priority than Earl Thomas, Adrian Amos, Lamarcus Joyner, Tyrann Mathieu, Ha Ha Clinton-Dix, and others.

Stewart graded out as just the No. 77 ranked safety in the NFL last year, according to Pro Football Focus. His 59.6 overall score was a massive step back from his first two seasons in Denver, which included a Pro Bowl-worthy performance in 2016.

Bengals wide receiver A.J. Green is progressing in his recovery from the hamstring injury he suffered Nov. 20, but he’ll miss Sunday’s game against the Eagles, according to Bob Holzman of ESPN. Although the 3-7-1 Bengals are all but out of playoff contention, the five-time Pro Bowler has no plans to shut himself down for the season. “I want to get back,” he told Jim Owczarski of the Cincinnati Enquirer. “No matter what type of season we have, I’m not the type of guy to cash it in. So, whenever it’s ready, I’ll be ready to go. But, I’m not going to rush it because I’m not going to have this be a continuing issue.”

The Broncos have seen enough from Darian Stewart in his two years with the team to know they want him around long-term, agreeing to terms with the safety on a four-year extension, Adam Schefter of ESPN.com reports (on Twitter). 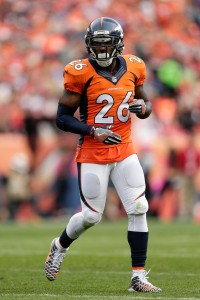 It’s a four-year deal worth approximately $28MM for Stewart, Mike Klis of 9News reports. The deal is worth up to $30MM, with $17.5MM guaranteed, NFL.com’s Ian Rapoport tweets.

This will make Stewart a top-12 safety in terms of AAV and, interestingly, the highest-paid safety on the team. T.J. Ward will make $5.75MM next season as part of a four-year deal he signed in 2014. But the Pro Bowl safety will enter the final year of his contract in 2017, with Stewart — the starting secondary’s lone non-Pro Bowl component –now looking set to be a part of this defense for a longer period of time.

The 28-year-old former UDFA was set to become a free agent in 2017. This locks up another player from Denver’s dominant defense. Stewart (44 tackles, three interceptions this season) joins Derek Wolfe, Brandon Marshall and Von Miller as defensive starters the Broncos have re-upped this year.

Klis reports the Broncos initiated this pact in advance of the free safety’s three-turnover game against the Saints. The Broncos signed Stewart to a two-year deal worth $4.25MM in 2015, and the former Rams and Ravens defender has been a quality starter since arriving. He made a game-sealing interception in his first contest as a Bronco and has started every game in which he’s played since, also forcing a fumble and recording a sack in Super Bowl 50.

Denver’s starting secondary of Stewart, Ward, Aqib Talib and Chris Harris is locked up through next season, with Talib and Harris signed through 2019. Stewart is now signed through ’20 instead of joining DeMarcus Ware and Sylvester Williams as walk-year starting defenders.

The Broncos drafted safeties Justin Simmons and Will Parks this year, pointing to a possible Stewart free agency defection like so many Broncos defenders in recent years. But the seventh-year player, who signed a one-year deal with the Ravens in 2014, will now will enter next season as a rare starter younger than 30 on a fourth contract.

In the news plenty this week for their flirtations with other cities, the Raiders haven’t engaged in any formal talks with Oakland about a new stadium, Matthew Artz of the Bay Area News Group reports.

Although the Raiders have discussed another one-year lease to play in their current home, O.co Coliseum, Oakland mayor Libby Schaaf confirmed no negotiations on a long-term playing site have occurred since relocation meetings took place Jan. 12 in Houston.

“I recognize that the Raiders have a powerful brand and that they will always have options outside of Oakland,” Schaaf said. “And, I remain committed to proving to them that Oakland has the most to offer them.”

The Raiders have been since connected to San Antonio, San Diego and, most recently, Las Vegas in their desperate attempt to leave Oakland and secure a new stadium. But Los Angeles will still be their most likely landing spot if the Chargers reach a deal with San Diego on a stadium agreement. They remain second in line to share the Inglewood stadium with the Rams if the Chargers end up succeeding on their leverage move in San Diego.

Any Chargers deal for a publicly aided new stadium will likely need to be finalized by this summer, Artz writes, in order to get the initiative on the November ballot. If not, the Raiders’ Los Angeles path clears.

“If the alternative is no deal in Oakland … or going to this fabulous new facility and not having to put any equity into it, it would be very hard for a reasonable businessman to turn that down,” stadium consultant Marc Ganis told Artz.

Here is the latest news on the Raiders and some of the other Western-division franchises.

After betting on himself during the 2015 offseason, signing a modest one-year deal in the hopes of having a big season and increasing his value, Raiders wideout Michael Crabtree is happy to have a new extension in place, which will keep him from worrying about dealing with the free agent market again this winter.

“It’s always nice to get it done, right?” Crabtree said on Thursday, according to Scott Bair of CSNBayArea.com. “That way we can just go play football. You ain’t worried about where you’re going to be next year and all that stuff. It’s pretty neat to know you’re wanted and you want to be on a team and you’re here.”

Here’s more on Crabtree’s new contract, along with some other items out of the AFC West:

Having lost Jordan Cameron to the Dolphins and missed out on Charles Clay, who signed with the Bills, the Browns are considering tight end Rob Housler, writes Jeremy Fowler of ESPN.com. According to Fowler, the Browns have had discussions with Housler, and there’s mutual interest between the two sides, but no visit has been planned and no deal is imminent. Housler, who turned 27 last week, caught just nine balls for the Cardinals last season after recording 84 combined receptions in 2012 and 2013.