Todd Wash spent eight seasons with the Jaguars, rising to the role of defensive coordinator in Gus Bradley‘s final season and keeping that job throughout Doug Marrone‘s ensuing tenure. Following the Jags’ decision to reboot around Urban Meyer, Wash has located a landing spot.

The Lions are hiring Wash as their defensive line coach, Field Yates of ESPN.com tweets. Additionally, Detroit will add former linebacker Kelvin Sheppard — whose eight-year career ended with the Lions — as a defensive assistant and Seth Ryan as their assistant wide receivers coach. Seth is Rex Ryan‘s son.

Prior to becoming Jacksonville’s DC in 2016, Wash was an NFL D-line coach for the previous eight seasons. He followed Bradley from Seattle to Jacksonville in 2013, previously serving as the Seahawks’ D-line coach from 2011-12. Wash, 52, will work under first-time coordinator Aaron Glenn.

Wash’s Jacksonville tenure became complicated once the franchise began stripping parts from its dominant defense in 2019. Behind their “Sacksonville” defensive line, Jaguars led the NFL in defensive DVOA in 2017. Wash’s defense had the team on the precipice of Super Bowl LII. Despite the Jags’ 3-13 record in 2016, they ranked sixth in total defense. In 2018, the last season in which Wash’s unit had its host of high-end cogs, the Jaguars boasted a top-five defense.

After the franchise gutted the group over the next two years, its effectiveness predictably worsened. Amid its 15-game losing streak, the 2020 Jags edition allowed a franchise-record 492 points. By Week 17, only Myles Jack was left from Jacksonville’s 2017 defense.

A 2011 third-round Bills pick, Sheppard played for five teams through the 2018 season. He started 63 games, primarily for the Bills and Dolphins, in that span and landed with Detroit for the second half of the ’18 slate. Seth Ryan, just 26, spent the past two years as a quality control staffer with the Chargers. 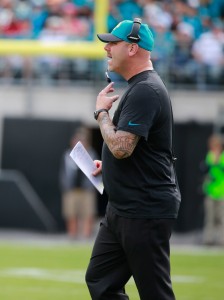 “I have confidence that one day soon we’ll look back on today’s news as the moment that inspired and ultimately established the Jacksonville Jaguars as a football team that wins, week to week and season to season.

“I am honored to welcome Tom Coughlin back to Jacksonville, where winning was customary under his leadership. I know he expects the same in his return to head our football operations, and that’s good news for us and Jaguars fans everywhere. The extension of Dave Caldwell’s contract speaks to his excellent work thus far and the continued importance of complementing our talented and promising roster.

“I am particularly enthused to introduce Doug Marrone as our new head coach. Doug is a strong football man in every respect and offers us qualities that will serve us well in all facets of the team, from the meeting rooms to game day and much more. The results will speak for themselves in time, but with Tom coming in to join Dave and Doug, there is no question the Jacksonville Jaguars are a stronger football team today.”

We recently heard the the Rams are considering using the transition tag on cornerback Trumaine Johnson, who is eligible for unrestricted free agency in just over two weeks. Mike Florio of ProFootballTalk.com discusses why a team would consider the transition tag–which does not net a team any compensation when the tagged player signs elsewhere–when a slightly more expensive franchise tag would virtually assure the team of retaining the tagged player. As Florio writes, “Some may be doing it just to see what the player’s value is, knowing that if it’s too high they’ll let him walk. Others possibly don’t want the franchise tender to lay the foundation for a long-term deal.”

Florio, citing a league source, says that if Johnson does get the transition tag, he will not sign the transition tender. Instead, he will actively seek an offer sheet from another team, just as Alex Mack did in 2014 and Charles Clay did last season.

SATURDAY 8:35am: Bradley spoke to the media last night, and the head coach gave his take on the extension.

“Believe me, I appreciate it,” he said (via Ryan O’Halloran of Jacksonville.com). “I think it’s awesome. It’s pretty strong.”

Bradley was also thrilled that his entire coaching staff got an extra year, stating that it’s an indication that the master plan is starting to come together.

“This was [Khan and Caldwell] saying, ‘We believe it’s coming together and we believe in this staff,’ ” Bradley said.

FRIDAY, 8:01am: Jaguars head coach Gus Bradley won’t enter the 2016 season as a lame duck. As first reported by Ryan O’Halloran of the Florida Times-Union, Jacksonville has extended Bradley’s contract by a year, locking him up through the 2017 season. The team has confirmed the move in a press release. 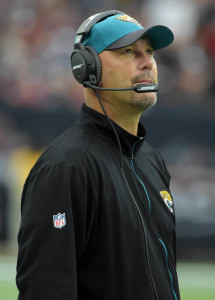 “For an organization that we believe is ready to make its move, extending Gus through the 2017 season provides our club with much-needed stability in every respect,” General manager Dave Caldwell said in a statement. “It solidifies Gus’ good standing with our current players, provides certainty for free agents who may be considering the Jaguars and helps to deliver the continuity throughout our coaching staff that we think is critical for us to turn the corner.”

Jaguars owner Shad Khan said before the team’s final game of the regular season that Bradley would return for the 2016 season, and NFL clubs typically don’t like having coaches on expiring contracts, so the new deal doesn’t come as a real surprise.

Khan’s statement in December suggested that he expects the team to take a step forward next season, and at the time it sounded as if Bradley would be on the hot seat if the Jags went through another losing season (the team is just 12-36 during his tenure). I don’t expect today’s move changes that — Khan would simply have to eat an extra year of salary now if he decides to make a change next year.

Still, with Blake Bortles and Allen Robinson helping to turn the Jaguars’ offense into a dangerous unit, Dante Fowler set to return in 2016, and the Jags set to add another top-five pick to the mix in the spring, there are signs that the franchise is headed in the right direction. By retaining Bradley and promoting an in-house assistant, Todd Wash, to the open defensive coordinator position – a move the club confirmed today – Khan and the Jaguars are betting on continuity heading into ’16.

In addition to announcing the one-year extension for Bradley, the Jaguars confirmed today that they’ve promoted Mark Ellenz to director of college scouting to replace Kyle O’Brien, who joined the Lions earlier this month, tweets John Oehser of Jaguars.com. O’Halloran adds (via Twitter) that the club also announced Daniel Bullocks is the new assistant defensive backs coach.

Wash will call defensive plays for the Jaguars in 2016, tweets O’Halloran. The Times-Union scribe adds that, like Bradley, the team’s assistant coaches all have contracts that run through 2017 now as well (Twitter link).

The Jaguars conducted an extensive search for their new defensive coordinator, interviewing multiple outside candidates, but ultimately the team decided to stay in-house to fill the position. According to Ryan O’Halloran of the Florida Times-Union (Twitter links), Jacksonville has promoted defensive line coach Todd Wash to DC, and will hold a press conference on Friday to announce the decision. 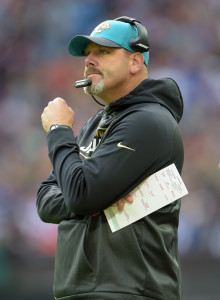 Wash, who came to the Jaguars in 2013 from the Seahawks, along with head coach Gus Bradley, has served as the defensive line coach for the team since then, and also had run game coordinator added to his title for the 2015 season.

The Jaguars also reportedly interviewed Jim Schwartz, and were one of at least three teams that had interest in him, along with the Browns and the Eagles. Schwartz landed in Philadelphia, and it’s not clear if he might have been Jacksonville’s pick if he hadn’t been hired by another team first.

In any case, Wash will take over a unit that finished 25th in the NFL in 2015 in yards allowed per game (375.0), and ranked 26th in terms of DVOA, per Football Outsiders. The new defensive coordinator will have the benefit of getting back Dante Fowler, the club’s 2015 first-round pick, whose rookie season was lost due to a torn ACL.