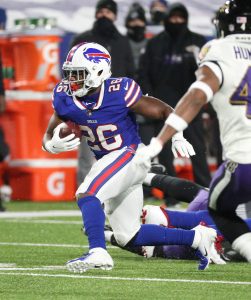 “What does his skill set have in comparison to what we have on the roster?” Beane asked reporters (via Josh Alper of ProFootballTalk.com). “Is this player going to do something … I don’t think either one of our backs are home run hitters, so is there an elite trait that this guy has and says, ‘Man, he’s got something we don’t have.’ That’s probably the conversation, versus, ‘OK, are we going to take the same type of back as Devin [Singletary], are we gonna take the same type of back as Zack [Moss]? Because even those two guys have different skill sets.”

While the Bills have used third-round picks in each of the past two drafts to select running backs (Singletary in 2019, Moss in 2020), the team still ranked in the bottom-half of the NFL in rushing yards, yards per attempt, and rushing touchdowns (with a chunk of that production coming from Josh Allen and his 421-yard, eight-touchdown performance on the ground). While Singletary and Moss (along with free agent addition Matt Breida) should be a passable grouping in 2021, it’d make sense that the team would look to add a dynamic play-maker to the bunch.

Clemson’s Travis Etienne, Alabama’s Najee Harris, and North Carolina’s Javonte Williams could all be available when the Bills are on the clock at No. 30.

It looks like Bills tight end Tyler Kroft isn’t going to be ready for the start of the regular season. Buffalo signed Kroft to a three-year, $18.75MM deal back in March, and he was supposed to be their starter. He then broke his foot during OTAs, and the initial timelines had him coming back sometime right around the start of the regular season. He apparently isn’t too close to returning, as he hasn’t done any on-field work yet, according to Joe Buscaglia of The Athletic (Twitter link). Buscaglia adds that it’s “looking more and more likely” that Kroft opens the year on the PUP list.

If he does start the season on PUP, Kroft will have to miss at least Buffalo’s first six games. That’s not welcome news for the Bills, as they don’t have a ton of experience at the position. Kroft showed some potential during his four years with the Bengals, but an injury to the same foot limited him to just five games last season. In 2017, he had 42 catches for 404 yards and seven touchdowns. Kroft’s injury may end up opening up opportunities for rookie Dawson Knox, who the Bills drafted in the third round back in April. Buffalo also has veteran Lee Smith on the roster, although he’s always been a blocker and has barely ever contributed as a receiver.

Ryan Fitzpatrick is well on his way to starting for a third AFC East franchise. The 15th-year veteran continues to hold off Josh Rosen for the Dolphins‘ starting quarterback job. “It’s pretty clear to me that Ryan Fitzpatrick is leading the way,” Brian Flores said Tuesday (via ESPN.com’s Adam Schefter, on Twitter). Rosen was viewed as the clear underdog for the Week 1 role coming into camp. Fitzpatrick has not been a regular starter since his two-year Jets tenure concluded after the 2016 season, while Rosen started 13 games for an overmatched Cardinals team last year.

Florida Atlantic running back Devin Singletary announced that he will enter the 2019 NFL Draft. The 5’9″ tailback could be in the first or second round mix, so it’s a logical move from his perspective. 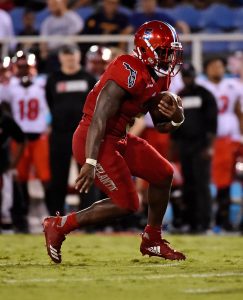 “I hope I left a lasting impression on The University, football program, and the entire community,” Singletary said. “As I take the next step in to my career I will continue to represent FAU in the right way and you will forever be in my heart.”

Singletary, 20, ran for 1,920 yards and an FBS-leading 32 rushing touchdowns in 2017. This year, he had 22 touchdowns and 1,348 rushing yards, but the drop in production could be attributed to the team’s overall step back. In 2017, the team’s first year with Lane Kiffin at the helm, the Owls went 11-3 and defeated Akron in the Boca Raton Bowl. This year, they finished out 5-7 and did not qualify for a bowl game.

On his latest big board, Bleacher Report’s Matt Miller has Singletary ranked as the No. 10 overall running back behind David Montgomery (Iowa State), Damien Harris (Alabama), Darrell Henderson (Memphis), Benny Snell Jr. (Kentucky), Rodney Anderson (Oklahoma), Bryce Love (Stanford), Justice Hill (Oklahoma State), Karan Higdon (Michigan), and Mike Weber (Ohio State). However, he has Singletary pegged as the biggest sleeper of the bunch, and he could vault up draft boards with a strong showing in workouts.