The Packers have released running back Don Jackson. Jackson announced the news on Twitter himself on Monday (sic): 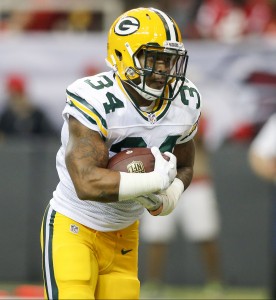 “Gods got a new plan for me and the NFL is a business !! Thank you to the Packers organization for taking a chance on me a year ago!,” Jackson wrote.

Jackson was an exclusive rights free agent this offseason and the Packers opted to retain him in April. Weeks later, he has been let go, leaving the Packers with just two running backs on the roster in Ty Montgomery and Christine Michael.

The 23-year-old appeared in three games (one start) for Green Bay last season, and managed 32 rushing yards on ten carries.

Running back Eddie Lacy‘s season is over. Lacy will have surgery performed on his injured ankle, likely ruling him out for the remainder of the season. Taking his place will be running back Don Jackson who is being promoted from the practice squad today. The team has confirmed both moves via press release. 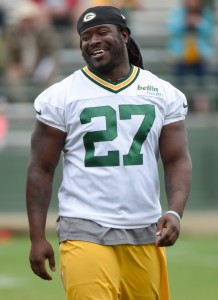 If Lacy is able to return, he would be eligible to come back for Week 15 of the regular season. Jackson will serve as Green Bay’s primary tailback tonight. In the longer term, it remains to be seen how the Packers will fill the void while Lacy is sidelined. The Packers acquired Knile Davis from the Chiefs earlier this week and they’ve also taken to using wide receiver Ty Montgomery in the backfield. While Montgomery offers great pass catching ability, they would like to have a more traditional runner available at times.

Lacy recently received a second opinion on his foot from Dr. Robert Anderson in Charlotte. Initially, the belief was that Lacy suffered a sprain, but it now looks like he is dealing with something more severe. Lacy, a powerful yet inconsistent tailback, suffered the injury in the Packers’ Week 5 win over the Giants. He toughed it out, running for 65 yards on 17 rushes the following week against Dallas.

The Packers will test out their makeshift backfield tonight against the 1-5 Bears. The Bears are allowing an average of 107.7 rushing yards per game this season, putting them roughly in the middle of the pack.

The Packers are a bit shorthanded at running back after James Starks underwent surgery yesterday, so the club will promote RB Don Jackson from their practice squad, according to Ian Rapoport of NFL.com (Twitter link). No corresponding move has been announced as of yet. 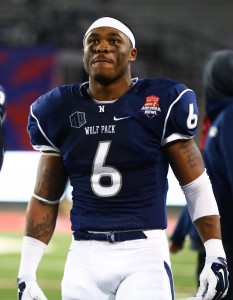 Starks will likely be out “about four weeks” after going under the knife to repair a knee issue on Sunday morning, Mike Garafolo of NFL.com tweets. Eddie Lacy, who is nursing an injury of his own, is the only other true running back on the Green Bay roster. Wide receivers Randall Cobb and Ty Montgomery are options to line up in backfield, but Jackson will give the club an actual back.

This morning, head coach Mike McCarthy left the door open to signing a running back (and/or a cornerback), but he acknowledged that it might be difficult to pull off without thinning out the team in another area, as ESPN.com’s Rob Demovsky wrote. However, the need for another RB apparently outweighed any concern the Packers had about robbing Peter to pay Paul.

Jackson, 23, is an undrafted rookie free agent that originally signed with Green Bay over the summer. After being waived, he’s spent the year on the Packers’ taxi squad.

The Packers have announced their undrafted rookies, confirming in a press release that they’ve added 19 college free agents to their 90-man roster. The team has added four wideouts to its already-crowded receiving corps, and also signed three cornerbacks. Here’s the full breakdown of the 19-man UDFA class for Green Bay: