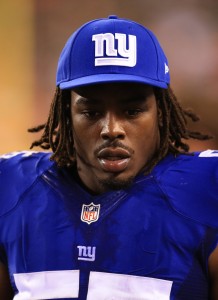 The playing time bonus is hardly an automatic for Thomas. The 29-year-old suffered a season-ending knee injury in last year’s season opener and appeared in only 12 games in 2015, his debut season with the Giants.

When Thomas came to the Giants on a three-year, $10MM deal, he was signed to be the team’s starting weakside linebacker. This time around, he’s fighting to make the cut as a special teams player and backup linebacker. On the plus side, coach Ben McAdoo has expressed confidence in Thomas’ abilities.

“He’s working through individuals and we’ll have a plan to build him up as we go. We’re not going to rush into anything with him,” McAdoo said earlier this week. “He’s got a chance to build himself up, play some meaningful games as we go. There’s a pretty good chance he won’t play this next ball game, but he’ll have a chance to play here shortly.”

Thomas will now battle it out with Curtis Grant, Mark Herzlich, Calvin Munson, and Deontae Skinner for the final linebacker spots on the roster.

The Giants announced that they have placed J.T. Thomas on injured reserve. Thomas suffered torn ligaments in his left knee during their season-opening win against the Cowboys. In a related move, kicker Josh Brown has been reinstated to the 53-man roster after serving his one-game suspension.

Thomas was with the special teams unit on the field when the injury happened. During the kickoff to close out the first half, Thomas was chasing after Lucky Whitehead and working to shed a block when he was hit in the knee. Thomas spent much of the summer on the PUP list with a hamstring injury and accepted a pay cut just days ago to remain with the team.

Thomas signed a three-year, $10MM deal with the Giants prior to the 2015 season. The 28-year-old missed four games in his first Giants season but played in 12 games with a career-high 11 starts at weakside linebacker. All in all, he had 43 tackles and three special teams tackles.

Brown, of course, was handed a one-game suspension for his role in a May 2015 arrest on domestic violence charges. When additional information came out about the allegations, Brown found himself at the center of a national controversy as many believed his punishment was too lenient.

J.T. Thomas will remain with the Giants for the upcoming season after accepting a pay cut. Thomas has gone from a $2.975MM in base salary this season to $1.5MM, as Jordan Raanan of ESPN.com writes. However, Thomas will be able to earn $100K in per-game roster bonuses and $550K in playing-time incentives. All in all, that’s a potential pay cut of $1.375MM for 2016.

Thomas signed a three-year, $10MM deal with the Giants last offseason after he appeared in all 16 games for the Jaguars the year prior and made ten starts. The 28-year-old is still signed through 2017 and Raanan writes that the final year of his deal remains untouched for now.

Thomas missed most of the summer with a hamstring injury, putting him on the roster bubble. He also struggled last season. However, the Giants still value him as a special teams contributor and he may see some time as a backup to Jonathan Casillas at weakside linebacker.

For the final time in 2015, let’s take a look at the today’s minor transactions from around the NFL:

TUESDAY, 5:09pm: The Giants are set to sign linebacker J.T. Thomas, Ian Rapoport of NFL.com (on Twitter). It’ll be a three-year deal worth $12MM with $4.5MM fully guaranteed.

Thomas, 27 in August, appeared in all 16 games for the Jaguars last season and made ten starts. In total, he had a career-high 85 tackles to go with five pass deflections and two forced fumbles. Pro Football Focus (subscription required) wasn’t all that impressed with Thomas’ play in 2014, giving him an overall grade of -16.1, placing him as one of the worst inside linebackers in the NFL.

Linebacker was an area of need for the Giants this offseason, but the size of the deal given to Thomas is rather surprising given his previous body of work.

A few details on some noteworthy new contracts from around the NFL:

Having officially made the decision today to use their non-exclusive franchise tag on Justin Houston, the Chiefs will be back over the projected cap for 2015 until they make some more cuts or restructure some contracts. Still, that doesn’t mean the team won’t be able to eke out some cap room to potentially make some moves in free agency, as chairman Clark Hunt said this weekend (link via Terez A. Paylor of the Kansas City Star).

“We always want to be a smart player in free agency,” Hunt said. “We want to sign guys that can be here and make a contribution, not necessarily (sign) somebody just because he makes a splash. … We also pay a lot of attention to the salary cap because you … can spend whatever you want and circumvent the cap, but every one of those dollars eventually comes back and hits you on the cap. So when we look at the salary cap, I’m not just looking at 2015, I’m thinking about 2016, 2017. So those decisions are made in that context.”

Let’s round up a few more items from around the AFC….