The Bills opened up some cap space today by reworking one of their veteran’s contracts. The team converted $5.2MM of safety Jordan Poyer‘s base salary into a signing bonus, according to ESPN Field Yates (via Twitter). The move will save Buffalo $2.6MM against the cap. 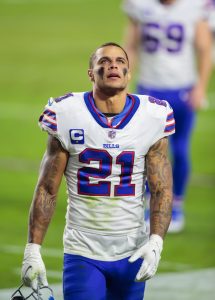 Thanks to the move, the organization has a bit more financial breathing room with about $4MM in cap space. Poyer’s cap hit will be reduced for the 2021 season, but it will jump from around $7.7MM to $10.3MM in 2022.

Poyer has spent the past four seasons in Buffalo, starting each of his 63 games. The former seventh-round pick signed a two-year extension with the organization in 2020, keeping him in Buffalo through at least the 2022 season.

The 30-year-old had one of his most productive NFL season in 2020. In 16 starts, the safety finished with a career-high 124 tackles to go along with two sacks, two forced fumbles, and two interceptions. Poyer also started each of Buffalo’s three playoff games, collecting another 20 stops.

Jordan Poyer delivered for the Bills on a lower-middle-class (for the NFL) contract over the past three years, and the team will reward him. The Bills and the veteran safety agreed on an extension Tuesday, Jeremy Fowler of ESPN.com tweets.

The new deal will pay him $20.5MM over two years, Ian Rapoport of NFL.com (via Twitter) hears. That’ll take him through the 2022 season, meaning that both he and safety mate Micah Hyde are each signed beyond this coming season.

Poyer, 29 in April, turned in a career-high 107 tackles last year. His stop totals have been trending up ever since he joined the Bills in 2017. All in all, he’s made 302 tackles for the Bills across the last three seasons, serving mostly as a part-timer.

In bigger news out of Buffalo, the Bills swung a blockbuster deal to acquire Stefon Diggs from the Vikings earlier this week. On the other side of the ball, they landed former Panthers defensive end Mario Addison on a three-year deal.

Let’s take a look at the details of some recently-signed contracts:

The Bills have signed safety Micah Hyde, according to a team announcement. Within the release, they also announced the signing of fellow safety Jordan Poyer, formerly of Cleveland. Hyde will receive $30MM over a five-year term, with the chance to earn as much as $32.5MM, tweets Ian Rapoport of NFL.com. $14MM is guaranteed. 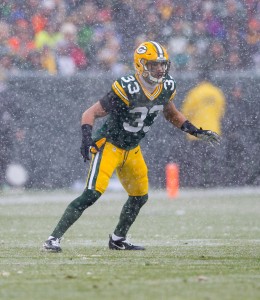 Hyde had spent his entire four-year career in Green Bay, though its interest in bringing him back for a fifth season never seemed all that high. The team may have not even made Hyde an offer. If the 26-year-old’s career with the Packers is over, it’ll end with 63 regular-season appearances out of a possible 64, 33 starts, eight interceptions, five forced fumbles and four sacks.

Hyde is coming off a 16-game, 11-start season, in which he tied a career high with three picks and ranked a decent 53rd among Pro Football Focus’ 112 qualified cornerbacks. Hyde also has experience at safety, so his track record of versatility, productivity and durability should enable him to land an appreciable raise over his $1.671MM base salary from 2016.

Hyde was among my Top 50 Free Agents, a list built on projected earning power.

Browns guard Joel Bitonio had surgery on Monday to repair the Lisfrance injury in his right foot, ESPN.com’s Pat McManamon tweets. The surgery rules Bitonio out for the 2016 season but he should be able to take part in all of the team’s offseason work prior to the 2017 season. 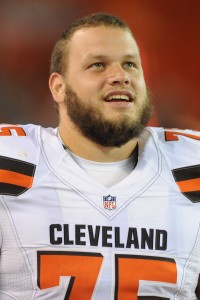 Bitonio was placed formally placed on IR last week. A late-season return was on the table thanks to the new IR rules, but it’s not possible now after the offensive lineman went under the knife. Of course, when your team is winless through six games, there’s not much incentive to rush back and risk further injury.

In other Browns news, safety Jordan Poyer has been placed on IR, per a team announcement. Taking his place will be fellow safety Ed Reynolds who was promoted from the practice squad. Poyer suffered a lacerated kidney against the Titans on Sunday and had to be transported to a hospital before halftime. Through six games, Poyer recorded 37 tackles, matching his career high set in 2015.

A full-time starter for the first time in his career, Jordan Poyer may not return to the Browns’ lineup for a while after suffering a lacerated kidney against the Titans. 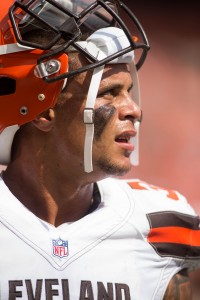 The 25-year-old safety was transported to a Nashville, Tenn.-area hospital before halftime, Nate Ulrich of the Akron Beacon Journal reports, and he will remain there overnight for observation. The Browns announced Poyer as being in stable condition. Mary Kay Cabot of the Cleveland Plain Dealer reports the team believes this is a serious laceration and expects Poyer to miss the rest of the season.

A collision with Titans fullback Antonio Andrews on special teams caused the injury and induced the Browns to evaluate the fourth-year free safety for a concussion. The team has yet to announce whether Poyer sustained one, however, according to Ulrich. Rookie UDFA Tracy Howard filled in for Poyer after he left the game.

Poyer has 37 tackles this season to match his career high set last season.

We don’t cover every NFL injury at Pro Football Rumors, but generally if a quarterback or another notable player is expected to miss time, or if an injury is considered serious, we’ll pass that news along, since those are the injuries most likely to result in a roster move. Here are a few updates from around the NFL on injuries sustained in Week 7: