The Raiders have designated running back Jalen Richard for return. Meanwhile, fellow RB Josh Jacobs joined the team for practice on Thursday, a sign that he could take the field against the Chargers this week.

Richard has spent five seasons with the Raiders, including a 2018 campaign where he finished with 866 yards from scrimmage. He hasn’t been able to match that production over the past two years, combining for only 729 yards from scrimmage in 29 games. Still, the 27-year-old was supposed to open the year as a primary backup to Jacobs. Instead, he’s been sidelined for the last couple of months with a foot injury.

Jacobs, meanwhile, has not been seen since the season opener against the Ravens. Instead of putting him on IR and ruling him out for three games, they’ve tasked Kenyan Drake and Peyton Barber with handling the workload. The two-time 1,000-yard rusher scored two touchdowns in that game with 40 all-purpose yards.

Drake has yet to flourish in their stead, but Barber delivered last week with 111 rushing yards to help top the Dolphins.

The Raiders will be down another member of their starting offense for their Week 2 game against the Steelers. After losing Denzelle Good for the season, the team ruled out Josh Jacobs for Sunday’s matchup. 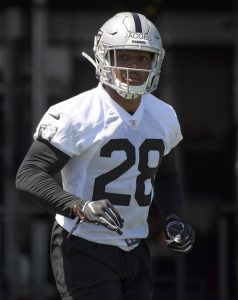 Jacobs missed practice throughout the week due to toe and ankle injuries. The toe issue emerged before Las Vegas’ opener; the ankle problem surfaced on this week’s injury reports.

The two-time 1,000-yard rusher appeared on the Raiders’ first injury report of the season but played against the Ravens. Jacobs scored two touchdowns in the Raiders’ Monday victory. Jacobs played 15 games last season, doing so after finishing his rookie season on IR due to an ankle ailment.

Kenyan Drake, whom the Raiders gave a two-year deal worth $11MM, stands to move into the team’s starting lineup. Drake spent the past two seasons as the Cardinals’ starting back. Playing on the transition tag last season, the former Dolphins draftee gained 955 rushing yards (4.0 per carry). Jon Gruden, however, said recent pickup Peyton Barber will pick up some of the slack as well. The Raiders added Barber after Washington released him ahead of this year’s roster cutdown deadline.

The Raiders just wrapped up a disappointing season that saw the team miss the playoffs again, and now they’re getting more bad news. Starting running back Josh Jacobs has been arrested for DUI, according to Kevin Bolinger of FOX 5 Vegas (Twitter link).

Las Vegas police confirmed that Jacobs was in a single car accident at the airport at 4:42 AM, and that police suspected impairment. He was then taken to the hospital to be checked out, so it sounds like he suffered at least some minor injuries. Jacobs has since been released from custody and has a court date set for March 8th. Obviously it’s very early in the process but if the details are confirmed, Jacobs could be looking at a short suspension for a personal conduct policy violation.

Lawyers for Jacobs quickly released a statement after the news broke, saying “No complaint has been filed against our client and there are no blood test results to support a suggestion of impairment. We intend to enter a not guilty plea on behalf of Mr. Jacobs if he is ever charged.”

The Raiders didn’t offer much, saying in a statement of their own “The Raiders are aware of the situation involving Josh Jacobs. The organization takes these matters seriously and we have no further comment at this time.”

The 24th overall pick of the 2019 draft, Jacobs made the Pro Bowl for his play this past season. He became the Raiders’ featured back as a rookie, starting all 13 games he played in and rushing for 1,150 and seven touchdowns. This past year he rushed for 1,065 yards and 12 touchdowns in 15 games.

His efficiency dipped in 2020, as he averaged only 3.9 yards per carry, down from 4.8 as a rookie. That wasn’t all his fault though, as Vegas’ offensive line wasn’t quite as sharp and Jacobs also played through significant injuries in the second half of the season. He was also more involved in the passing game, drawing 45 targets, up from 27 the year before. We’ll keep you posted as we hear more on this situation.

For the first time this season, the Raiders will be without their starting running back. They ruled Josh Jacobs out for Sunday’s game against the Jets.

Jacobs suffered an ankle injury against the Falcons and has not practiced this week. The team will hold him out of its matchup against an 0-11 team, putting Devontae Booker in line to receive a starter’s workload.

This certainly is a situation to monitor for the playoff-contending team. Last season, the Offensive Rookie of the Year runner-up could not cement his case for that award after a shoulder injury halted his initial NFL season. Jacobs played through that issue for a while but ended up being shut down, missing the final two games of last season and ending his rookie slate with three injury-related absences. Jacobs still broke the franchise’s rookie rushing record.

This season, Jacobs has again been one of the NFL’s top rushers. Despite the Raiders missing various starting offensive linemen for most of the year, Jacobs has rushed for 782 yards (fifth in the NFL) and nine touchdowns. The Alabama product’s average is down a full yard, however, sitting at 3.8 through 11 games.

Las Vegas signed Booker this offseason and has used him as Jacobs’ primary backup. After seeing his role minimized in Denver, Booker has averaged 5.5 yards per carry on 59 totes with Las Vegas this season. The Raiders will have Booker and passing-down backs Jalen Richard and Theo Riddick in a key game in New Jersey. 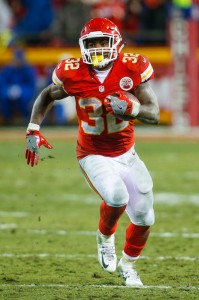 Jadeveon Clowney hasn’t played in two weeks, but the 26-year-old is anxious to get back on the field for the Seahawks. The defensive lineman told ESPN’s Brady Henderson that “there’s no way” he’ll miss his team’s season finale against the 49ers. Clowney also acknowledged that the two missed games will help him in the postseason.

Clowney missed Week 15 against the Panthers with the flu, and he was out for Week 16 against the Cardinals to deal with a lingering core injury. Henderson notes that Clowney was listed as limited on the Seahawks’ first injury report of the week.

The Raiders have placed offensive tackle Trent Brown on injured reserve. With that, his first season in silver and black will end a few weeks early.

Brown has been absent from the team’s last two games with a pectoral injury. Up until then, he was having a fantastic season. The veteran started eleven games at right tackle in 2019 en route to a Pro Bowl selection.

Thanks to the four-year, $66MM deal he inked with the Raiders last March, Brown will be under contract for another three seasons. Fun fact: Brown structured his deal to earn $15MM in 2019 with a jump to $21.5MM in 2020, when the Raiders move to Las Vegas, Nevada, where there’s no state income tax in Nevada). On the other side of the coin, Brown has no guaranteed money on his deal after the 2020 season.

In other Raiders news, running back Josh Jacobs is unlikely to play against the Chargers this week as he heals up from his shoulder injury. Jacobs might play in Week 17 against the Broncos, if the Raiders are willing to risk it.