Another coaching cycle has come and gone without Eric Bieniemy getting a head coaching job, but that doesn’t mean the Chiefs offensive coordinator will automatically return to Kansas City. According to NFL Network’s Tom Pelissero (via Twitter), Bieniemy‘s contract is expiring.

While the accomplished offensive coordinator could (and probably will) ink a new contract with the Chiefs, Pelissero warns that he would be a “hot free-agent OC target elsewhere.” You could make an argument that Bieniemy could improve his chances for a HC gig if he succeeds out of Andy Reid’s and Patrick Mahomes‘ shadows. Of course, if Bieniemy struggles without his elite offense, that would surely compromise any lingering chances he has of securing that elusive promotion.

Following a five-year stint as the Chiefs RBs coach, he earned a promotion to OC in 2018. Considering the Chiefs’ success, Bieniemy was a popular name in the coaching circuit in both 2019 and 2020. However, the 52-year-old didn’t generate as much interest during this year’s coaching cycle, as he was connected to only a pair of jobs (Saints, Broncos).

The Rams have lost numerous coaches from their 2020 staff, with Brandon Staley‘s departure being the most notable change for Sean McVay‘s squad. They will soon lose another staffer. 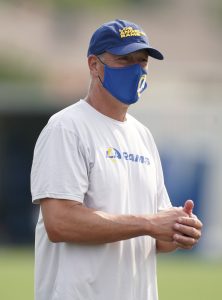 Run-game coordinator and offensive line coach Aaron Kromer and the Rams agreed to mutually part ways, Jourdan Rodrigue of The Athletic reports (on Twitter). Kromer has been with the Rams since McVay’s 2017 arrival.

It is not believed this separation relates to Kromer seeking a position elsewhere, Rodrigue adds, noting that Kromer’s son, Zak Kromer, is expected to stay on as a quality control staffer. But this will mark a change during an offseason that has featured many in Los Angeles.

Kromer has been an NFL assistant since 2001 and an O-line coach since 2002, when he broke into that role for the ’02 AFC champion Raiders. He rose to the role of Saints interim head coach during Sean Payton‘s 2012 suspension and worked as the Bears’ offensive coordinator under Marc Trestman from 2013-14.

Pro Football Focus ranked the Rams’ offensive line third last season, with the team bouncing back after a down O-line season in 2019. PFF slotted the Rams’ O-line sixth in 2017 and ’18. 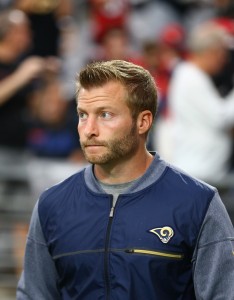 The Browns may want to think twice about who they select with the top-overall pick. Clemson coach Dabo Swinney told Mary Kay Cabot of Cleveland.com that the organization would be making a giant mistake if they pass on Tigers quarterback Deshaun Watson.

“It would be awesome,” he said. “It would be easy and he’ll figure that out. It will be the easiest player he’s ever coached. I’m sure he’s coached some good ones and so I have I, but he’s simple. Very low-maintenance, humble, same guy every day and always ready. He comes to every meeting prepared. That’s how you change things. You change a culture — for me it’s through discipline and recruiting and staffing and all of that stuff. For them, it’s decision-making. It’s who you pick.”

There will be a huge game between the Patriots and Jets that will decide who is in first place in the AFC East early in the season. Here are some notes surrounding that game, and the rest of the division.

Coming off yet another loss at Ralph Wilson Stadium, where they’re now 1-3 this season, the Bills will aim to get back on track overseas in Week 7. However, it doesn’t appear Percy Harvin will be able to play in the team’s game in London, according to Adam Schefter of ESPN.com (via Twitter).

As Mike Rodak of ESPN.com tweets, there are several Bills players whose status for that London game against the Jaguars is uncertain, so we’ll have to see how the team addresses its roster — typically, last-minute roster changes on the week of a London game are tricky, so the Bills figure to make a roster change or two sooner rather than later, if necessary.

The Bills announced that offensive line coach Aaron Kromer has been suspended six games for his offseason incident. Charges were dropped against the coach in late July and that probably saved his job with Buffalo.

“Over the past several weeks the Bills organization has gathered information regarding the incident involving Offensive Line Coach Aaron Kromer. Today we have concluded our investigation and the Buffalo Bills will suspend Coach Kromer without pay for the first six games of the 2015 NFL regular season,” Bills managing partner and president Russ Brandon said in the statement. “The suspension will begin on Monday, September 7, 2015 and end with the conclusion of the Buffalo Bills vs. Cincinnati Bengals game on October 18, 2015. We worked in conjunction with the NFL on this matter and we are highly supportive of the NFL Personal Conduct Policy that holds all NFL and club employees to a higher standard. We look forward to Coach Kromer rejoining the Bills organization at Training Camp.”

Kromer, who was the Bears’ offensive coordinator in 2014, was arrested in July on a misdemeanor battery charge. According to the Walton County Sheriff’s Office, Kromer and his son allegedly confronted a group of three boys – who had been fishing – over the use of beach chairs. The victims told Walton County deputies that Kromer grabbed their fishing pole and threw it in the water, then pushed one of the boys to the ground and punched him in the face. The victim, a juvenile, also said Kromer threatened to kill his family if he reported the incident to the police.

The Bills placed Kromer on paid administrative leave prior to their judgement on Sunday night.

5:27pm: While they haven’t made a final decision yet, the Bills will likely keep Kromer on their staff, suspending him without pay to start the season, according to Vic Carucci of The Buffalo News (via Twitter).

4:57pm: The charges against Bills offensive line coach Aaron Kromer – and his son Zachary Kramer – have been dropped, assistant Florida state attorney Bobby Elmore tells Mike Rodak of ESPN.com (Twitter links). According to Rodak, the two sides reached an agreement, with the charges dropped at the request of the accusers’ parents.

Kromer, who was the Bears’ offensive coordinator in 2014, was arrested earlier this month on a misdemeanor battery charge. According to the Walton County Sheriff’s Office, Kromer and his son allegedly confronted a group of three boys – who had been fishing – over the use of beach chairs. The victims told Walton County deputies that Kromer grabbed their fishing pole and threw it in the water, then pushed one of the boys to the ground and punched him in the face. The victim, a juvenile, also said Kromer threatened to kill his family if he reported the incident to the police.

The Bills placed Kromer on paid administrative leave while they looked into the incident, so the team will likely make a call on his status soon. With the legal situation now resolved, Buffalo may decide to bring Kromer back into the fold, though the settlement doesn’t necessarily mean the veteran coach was innocent — it just means the accusers were willing to drop the charges.