The Scottsdale Police Department is recommending that prosecutors charge Cardinals safety Chris Clemons for an alleged assault in May, Yihyun Jeong of The Arizona Republic writes. On May 8th, police say Clemons assaulted a 25-year-old woman outside a downtown Scottsdale nightclub. 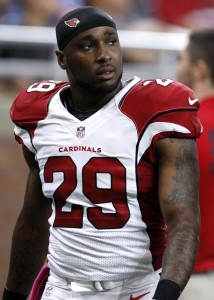 The alleged victim was knocked unconscious outside of the nightclub, though authorities received varying accounts of what happened from witnesses. The local police department is pushing for Clemons, 30, to be charged with assault with reckless injury and disorderly conduct. For his part, Clemons repeatedly denied that he assaulted the victim when talking to police.

Clemons hasn’t seen much playing time since joining the Cardinals in 2014, but he was re-signed by the team in February to a non-guaranteed deal. As the Cardinals’ page on Roster Resource shows, Clemons is battling Tony Jefferson, rookie Marqui Christian, and Durell Eskridge for a spot behind starters Tyrann Mathieu and D.J. Swearinger. If these allegations prove to have merit, Clemons may not get to take the field for a third season in Arizona.

TUESDAY, 12:50pm: The Cardinals have placed Mathieu on the injured reserve list, officially ending his season. As expected, the club has added a safety to the 53-man roster to provide some depth, re-signing veteran free agent Chris Clemons, who was cut by Arizona from IR earlier this season (Twitter link link via Urban).

MONDAY, 1:26pm: The Cardinals clinched the NFC West with their victory Sunday night over the Eagles, but that win came at a cost. Head coach Bruce Arians announced today that standout defensive back Tyrann Mathieu will miss the rest of the 2015 season – and postseason – after suffering a torn ACL (Twitter link via Darren Urban of AZCardinals.com).

Mathieu, 23, started all 14 games for the Cardinals this season, spending time at both cornerback and safety. Having already established new career highs in tackles (89), interceptions (5), and passes defended (16), the former third-round pick was one of the key players on defense for Arizona, so his loss will be a crushing one for the team.

Pro Football Focus had Mathieu ranked as the top cornerback in the NFL this season, grading him as the best in the league both in coverage and against the run. Defensive coordinator James Bettcher recently told Albert Breer of the NFL Network that he believed Mathieu should receive consideration for the league’s defensive player of the year award.

The Cardinals were also without Rashad Johnson during Sunday’s win over Philadelphia, so it wouldn’t be a surprise to see the club add another safety to the 53-man roster this week — Tony Jefferson and D.J. Swearinger could see increased roles, with Mathieu headed to IR.

A look around the NFL as the fifth Sunday of the season draws to a close:

The Cardinals have officially ended the season of starting running back Andre Ellington, placing him on the injured reserve list due to hernia surgery, tweets Darren Urban of AZCardinals.com. Using the newly-opened roster spot, the team signed veteran free agent safety Chris Clemons.

Clemons signed a two-year deal with Houston in the offseason that contained $450K in guaranteed money, but was cut by the Texans at the end of the preseason. Despite auditions with the Bills, Bengals, Falcons, and Lions since then, the 29-year-old didn’t find a new home until now. Clemons had spent the first five seasons of his career with the Dolphins, starting 48 games, racking up 207 tackles and four interceptions. Pro Football Focus (subscription required) graded Clemons as the 19th-best safety in the league last season.

As for Ellington, he’ll return to the Cardinals in 2015, and it will be interesting to see how his role in the offense is affected by his performance this season. After being deployed a change-of-place back in his rookie season, Ellington was leaned on heavily as the club’s feature back this year, and saw his yards per carry average dip from 5.5 to 3.3. In his absence, Kerwynn Williams and Stepfan Taylor figure to carry the bulk of the load out of the backfield.

In addition to signing Clemons and placing Ellington on IR, the Cardinals also added a couple players to their practice squad, signing wide receiver Travis Harvey and guard John Fullington to the unit, according to Urban. By our count, the Cards previously had nine players on their taxi squad, so we’ll have to wait for word on which player is being removed or signing elsewhere.

Earlier today, we learned that the Titans brought in cornerbacks Derek Cox, Brandon Ghee, and Curtis Marsh for auditions. Here’s a look at the latest workouts from around the NFL..