The Bengals have agreed to sign former Vikings left tackle Riley Reiff, as Jay Morrison of The Athletic tweets. Terms of the deal are not yet known. 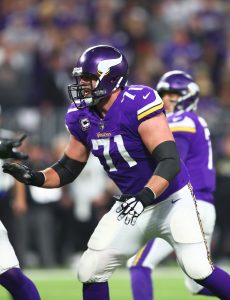 Reiff has never made a Pro Bowl or All-Pro team, but he’s been a solid starter for much of his career. The move to Cincinnati could force a change of positions — Jonah Williams is set to start at left tackle, so Reiff could wind up on the opposite side. He could also be kicked to the interior, which was rumored to be the plan at various times in Minnesota.

The Bengals started free agency with a defensive spending spree, but they’re also looking to fortify the front five. Reiff may help to keep Joe Burrow upright and healthy after his devastating ACL/MCL injury in 2020. There’s still more work to be done in that area — fortunately, the Bengals have plenty of draft capital to bolster the OL.

The Bengals entered free agency with glaring holes along the offensive line, but they spent the past couple of days bolstering their defense. They may now be shifting gears, as Ian Rapoport of NFL.com reports that former Vikings left tackle Riley Reiff will take a visit with Cincinnati (Twitter link). 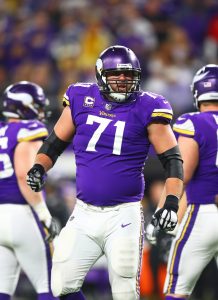 Reiff, who was released by Minnesota last week, has never made a Pro Bowl or All-Pro team, but he has been a mostly solid starter since he entered the league as a first-round pick of the Lions in 2012. There was some chatter in recent seasons that he could be shifted inside to guard, but that never materialized.

The Bengals, though, have Jonah Williams penciled in at LT. So if Reiff signs with Cincinnati, he could end up at right tackle or, theoretically, at one of the guard positions.

We heard back in January that the Bengals could spend big on the O-line this offseason, which would be a major departure from their standard operating procedure. But it makes sense, as the club needs to protect quarterback Joe Burrow at all costs, a point that was driven home in brutal fashion when Burrow suffered a torn ACL and MCL in Week 11 of the 2020 season. Reiff might not be a world beater, but he is a major upgrade over what the Bengals trotted out last year, and if the club can sign him and acquire another quality blocker or two in the draft and/or free agency, Burrow will surely be a happy man.

The young signal-caller would also be delighted if the team adds another top-flight receiver to his cadre of weapons. The Bengals have an offer out to WR Kenny Golladay, who, along with Tyler Boyd and Tee Higgins, would create a rather fearsome trio of pass catchers..

Yet another big name player is getting the axe. The Vikings are releasing offensive tackle Riley Reiff, the team announced Wednesday afternoon.

We heard over the weekend that Minnesota was looking for Reiff to take a pay-cut, and obviously the two sides weren’t able to come to an agreement. The release will now save the Vikings about $11MM in cap space for 2021. Reiff had been due a $5MM roster bonus on March 19th, so there was a tight timeline here. With the move the Vikings are now officially under the salary cap as they get ready for free agency.

The cap savings are nice, but they’ll now need a new starting left tackle. Prior to Week 17 when he was placed on the COVID-19 list, Reiff hadn’t missed a snap in 2020. In his nine seasons in the league, Reiff has never played in less than 13 games, which will certainly help his cause on the open market. The Vikings did right by him and gave him a $1MM bonus back in February to make up for the playing time incentive he missed because of that COVID game, which had led to some optimism they’d be able to work something out.

The 23rd overall pick of the 2012 draft, Reiff spent his first five years in Detroit. He then signed a five-year, $58.75MM contract with the Vikings in March of 2017 and has been their left tackle ever since. Minnesota will now either look for his replacement elsewhere, or move Bryan O’Neill from right tackle to left.

Reiff will be hitting free agency again now at the age of 32. Although he’s never made a Pro Bowl or All-Pro team, he’s capable of being a solid starter. Plenty of squads should be interested as he joins a strong offensive line market, and a team like the Chargers make a lot of sense on paper.

If Riley Reiff wants to stick around Minnesota, it sounds like he’ll have to take a pay cut. Chris Tomasson of TwinCities.com writes that the Vikings lineman “likely would need to take a pay cut for the second straight year to remain with the team.” In a separate tweet, Tomasson notes that the organization is “hoping to restructure” the veteran’s contract.

The Vikings left tackle is set to have a salary cap number of $14.95MM in 2021, and Tomasson believes some decision will be made before he’s owed a guaranteed $5MM roster bonus on March 19. If the organization decides to release him prior to that date, they can save a total of $11.75MM between his roster bonus, workout bonus, and $6.55MM base salary. On the books, they’d be left with just $2.2MM in dead money, the sum of his prorated bonus.

The 2012 first-round pick out of Iowa spent the first five seasons of his career with the Lions. He joined the Vikings on a massive five-year, $58.75MM deal prior to the 2017 season, and he’s been a consistent presence on the offensive line over the past four seasons. He’s missed six total regular season games over that span, and he would have appeared in 100-percent of his team’s offensive snaps in 2020 if not for a stint on the COVID-19 list to end the 2020 campaign.

If the Vikings were to move on from Reiff, they’d have some options to replace him. As Tomasson writes, right guard Ezra Cleveland played left tackle during his time at Boise State, or the team could look to move right tackle Brian O’Neill. With the latter, the front office will have to be wary of an impending extension, as a move to left tackle could boost O’Neill’s earnings.

The Vikings renegotiated Riley Reiff’s contract to furnish him with a $1MM signing bonus, according to Tom Pelissero of NFL.com (on Twitter). The left tackle would have reached a $1MM playtime incentive had he played in the final game of the year, but he had to sit out while on the COVID-19 list.

Reiff didn’t miss a snap up until his absence and would have comfortably reached the required ~94% snap threshold had he played in Week 17. Next, the Vikings will have to make a decision on Reiff’s future in Minnesota. The tackle has a $5MM roster bonus due on March 19th. If they release him previous to that date, they can save a total of $11.75MM between his roster bonus, workout bonus, and $6.55MM base salary. On the books, they’d be left with just $2.2MM in dead money, the sum of his prorated bonus.

Reiff has started in 58 games across four years with the Vikings. The 32-year-old was a rumored cap casualty last year, but they ultimately chose to stick with his veteran experience rather than thrusting second-round pick Ezra Cleveland into the starting lineup.

Riley Reiff is staying put. The Vikings are on the verge of finalizing a restructured contract that will keep the starting left tackle in Minnesota, as Field Yates of ESPN.com tweets.

Earlier this week, we heard that Reiff was expecting to be released by the cap-crunched Vikings. Thanks to the recent addition of Yannick Ngakoue, the Vikes were skittish about paying Reiff his scheduled $10.9MM in base pay and thinking about dropping him for $8.8MM in cap space. Heading into Tuesday morning, the Vikings had just $1.2MM in cap room, the lowest total in the league. The Vikings asked Reiff to decide on whether to take a pay cut or be cut by today, and he’s rendered his verdict.

Per Ian Rapoport of NFL.com, Reiff has agreed to drop his salary from $10.9MM to $6MM (Twitter link). He can earn $2MM of that back via playing time incentives, with Mike Garafolo of the NFL Network tweeting that Reiff will earn an additional $1MM if he plays in 86% of the team’s snaps in 2020 and another $1MM if he plays in 93.75% of snaps. Reiff was on the field of 85.7% of Minnesota’s offensive snaps in 2019, so the incentives are reachable but will be considered not likely to be earned for cap purposes, meaning that they will not count as a cap charge.

Reiff, 31, signed with the Vikings in 2017. Since then, he’s made 43 regular season starts at left tackle, though the Vikings were once thinking about moving him to the interior. In April, the Vikes tapped versatile lineman Ezra Cleveland in the second round, but they believe that he’s still too green for significant playing time. With quality tackles in short supply, the Vikings are glad to have struck middle ground with Reiff.