The Bills have hired ex-Rams offensive coordinator Rob Boras to serve as their tight ends coach, Mike Rodak of ESPN.com was among those to report. 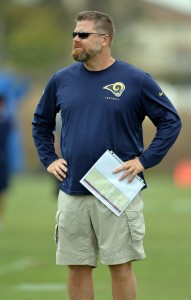 Boras, 46, was atop the Rams’ offense the past two seasons. The unit was woeful in each of those years, ranking 29th in DVOA in 2015 and dead last in 2016. The Rams also finished this season 32nd in both yardage (262.7 per game – nearly 50 fewer than the 31st-place offense) and scoring (14.0 PPG). As a result, Boras’ career as a coordinator is over for at least the time being. He previously worked as a tight ends coach with the Bears, Jaguars and Rams, and will now return to that role.

It’s not yet known whose offensive staff Boras will be a member of in Buffalo. New head coach Sean McDermott hasn’t named a coordinator, but signs are pointing to Greg Olson landing the job. He’s also a previous Rams and Jags assistant, though his stints with those teams did not coincide with Boras’.

In the midst of a dreadful season, 49ers coach Chip Kelly says he hasn’t discussed his future with team brass.

“No,” Kelly said, according to Eric Branch of the San Francisco Chronicle. “We haven’t had any conversations about that at all. About anybody’s job security.”

After losing 30-17 to New England, the Niners are now 1-9 and their nine-game losing streak ties a 38-year-old franchise worst. Still, Kelly is in his first year with the team and he did not inherit a great roster. It would be a bit surprising if Kelly was jettisoned so soon, but then again, coaches are often on a short leash in the NFL.

JANUARY 25: The Rams have hired former Bears assistant Mike Groh as their wide receivers coach and passing game coordinator, according to Jim Thomas of the St. Louis Post-Dispatch. Thomas notes that the addition means that Boras will return as the club’s offensive coordinator for 2016.

JANUARY 15: The Rams are expected to name Rob Boras their full-time offensive coordinator, though the move is not yet official, tweets Ian Rapoport of NFL.com. According to Rapoport, in addition to weighing their OC options, the Rams are interviewing potential passing-game coordinators. 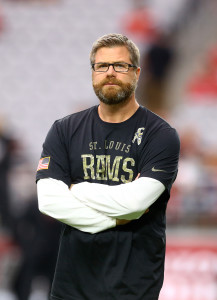 Boras took over as the Rams’ interim offensive coordinator with about a month left in the season, when the team parted ways with Frank Cignetti. Boras received consideration for the job before Cingetti was promoted last winter, but ultimately lost the competition — however, he received a new assistant head coach title at the time, and was in charge of the running game in addition to coaching the team’s tight ends.

Although the Rams finished with the league’s worst offense in terms of yards per game (297.6), the club showed marginal improvement during the last four games of the year under Boras. Additionally, buoyed by standout rookie Todd Gurley, the team averaged 122.3 rushing yards per contest, which was good for seventh in the NFL. So there’s some hope that the club could increase its offensive production if it gets its quarterback position stabilized.

The Rams have put in a request to interview Browns offensive coordinator John DeFilippo, a source tells Ian Rapoport of NFL.com (on Twitter). His work with a variety of quarterbacks was noticed by St. Louis, even though he hasn’t had the easiest hand dealt to him in Cleveland in that regard. 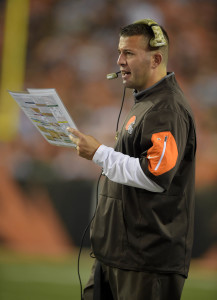 DeFilippo guided the Browns offense this season and had mixed results with an unusual cast of players. Of course, much of the attention on the Browns was centered on quarterback Johnny Manziel, who has had a number of run-ins with alcohol after spending last offseason in rehab. Even after Johnny Football was benched mid-season, DeFilippo expressed confidence that the Texas A&M product could turn things around.

“I like what I’ve seen,” said DeFilippo. “I really do. Even the jump he made from the Cincinnati game to the Pittsburgh game was a huge jump. I think we’d all agree on that. I think Johnny has played enough football where we know what we have in him.”

Now, DeFilippo will get a crack at the Rams’ OC job, if Cleveland allows him to interview. Rams interim OC Rob Boras will reportedly also get a chance to take the permanent job.

Rams head coach Jeff Fisher doesn’t appear to be going anywhere, but there may be changes coming to his coaching staff in the coming weeks, writes Nick Wagoner of ESPN.com. A year ago, St. Louis was one of the last teams to make a change at offensive coordinator, and it doesn’t sound like Fisher is in a hurry to finalize changes this year either.

“We’ll start the evaluation process,” Fisher said. “Go back and we’ll discuss our restricted free agents, our unrestricted free agents and prioritize things from a coaching perspective. Then, we’ll get the ball rolling as far as the self-scouting and things like that. Separately from them, I’ll be dealing with when and if there’s going to be and potential staff changes.”

Rob Boras took over as the Rams’ interim offensive coordinator late in the season, and is a candidate to keep the job, but Fisher remains undecided on that position. As we wait to see which direction the team goes, let’s check in on a few more coaching-related notes from around the NFL…

The 49ers have not interviewed any candidates yet nor scheduled any, GM Trent Baalke told reporters, including Cam Inman of the Bay Area News Group (on Twitter). He added that there are no in-house candidates at this time which is interesting given the presence of defensive coordinator Eric Mangini. Geep Chryst, the team’s offensive coordinator, has had head coaching buzz in the past, but his stock isn’t terribly high after a dismal 2015 season in San Francisco.

The Rams have become the latest team to fire an offensive coordinator, announcing today that they’ve parted ways with OC Frank Cignetti (Twitter link via Myles Simmons of STLouisRams.com). St. Louis is the fourth NFL club to fire its offensive coordinator this season, joining the Colts, Dolphins, and Lions.

According to the team, assistant head coach and tight ends coach Rob Boras will take over as offensive coordinator for the rest of the season. Boras received consideration for the job before Cingetti was promoted last winter, but ultimately lost the competition — however, he received a new assistant head coach title at the time, and was in charge of the running game in addition to coaching the team’s tight ends.

Cignetti, who replaced former Rams offensive coordinator Brian Schottenheimer, only lasted 12 regular season games in the role. However, the move doesn’t come as a real surprise. St. Louis has arguably had the league’s worst offense this season, even with Todd Gurley enjoying a handful of big games. Football Outsiders ranks the club dead last in offensive DVOA, with the passing offense – led by Nick Foles and Case Keenum – grading well below that of any other team in he league.

After Sunday’s loss to the Cardinals, head coach Jeff Fisher admitted that he was “almost out of answers” for how to solve the Rams’ offensive problems. Boras will be tasked with providing some answers in the next four weeks, but if the unit doesn’t show any improvement, both he and Fisher may be at risk of losing their jobs in January.

FEBRUARY 12: The Rams have finally made it official, announcing today in a press release that Cignetti will be the team’s new offensive coordinator and play-caller. Boras will lead the running game, in addition to coaching the tight ends, and receives a new assistant head coach title.

FEBRUARY 5: The Rams are expected to promote quarterbacks coach Frank Cignetti to offensive coordinator, a source tells Ian Rapoport of NFL.com (on Twitter). A formal announcement should come sometime next week.

The Rams have been searching for a new offensive coordinator ever since Brian Schottenheimer left the team to work at the University of Georgia. The Rams looked at out-of-house candidates for some time, but they ultimately circled back to Cignetti. St. Louis had interest in candidates such as Adam Gase and Rob Chudzinski and they appeared to be closing in on former Bills OC Nathaniel Hackett before he landed with the Jaguars.

Cignetti’s first NFL experience came in 1999 when he served as a quality control coach for the Chiefs. Since then, he has held several offensive coordinator positions at the collegiate level and jobs as a quarterbacks coach in the NFL. The Rams officially hired Cignetti to be their quarterbacks coach almost three years ago to this date.

The Rams also considered tight ends coach Rob Boras as an internal candidate for the opening.

Saints officials say that owner Tom Benson has maintained an active role in running the team, Jeff Duncan of The Times-Picayune writes.

“I talk to him every day, just as I have for 15 years,” GM Mickey Loomis said. “He talks to me about the same subject matter: The status of the team. And after the season: What are the issues? How are we going to fix the issues? Nothing’s changed here.”

Benson’s involvement with the team, as well as his overall health, came into question after the latest claims made by his ousted granddaughter. Here’s more on the Saints’ ownership situation, as well as a few more notes from across the NFC: