Free agency is one week away, but Aaron Brewer won’t be among those exploring the open market. The Cardinals announced a new four-year deal for the long snapper on Wednesday.

Brewer’s contract is worth $4.15MM in total, and contains $620K guaranteed, according to Tom Pelissero of NFL.com (Twitter link). His new $1.038MM annual salary will now rank 13th among NFL long snappers, and represents a steep pay raise from his previous average of $768K.

“I met my fiancée here,” Brewer said of Arizona in a press release. “I’m from San Diego and it’s really close. They gave me an opportunity this last time. I’m happy to be here.”

The Cardinals will bring back their special teams core in 2018 with kicker Phil Dawson, punter Andy Lee and Brewer all under contract. They’ll still have to address 21 other free agents (18 of which are unrestricted), including cornerback Justin Bethel, wide receivers John Brown and Jaron Brown, and edge rusher Kareem Martin.

It’s been a busy Monday around the NFL. Let’s check out some moves that may have flown under the radar…

The Broncos released veteran guard Louis Vasquez today, but he’s not the only player on the chopping block in Denver. According to Mike Klis of 9NEWS (via Twitter), the Broncos have also released tight end Owen Daniels. Troy Renck of the Denver Post adds (via Twitter) that long snapper Aaron Brewer has been cut as well. The team has since confirmed all three moves. 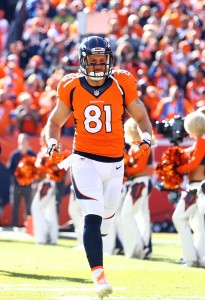 Daniels, who had two years left on his contract, would have had a cap number of $4.5MM on Denver’s books in 2016. By releasing him, the Broncos trim that figure by $2.5MM to $2MM, and avoid paying him a $500K roster bonus that had been due next week. The veteran tight end, who will turn 34 in November, caught 46 balls for 517 yards and three touchdowns during his lone season in the Mile High City.

As for Brewer, he had served as the Broncos’ long snapper since the 2012 season. Any cap savings Denver creates as a result of cutting Brewer would be extremely marginal, so it appears the team is parting ways with him for other reasons.

We’ve already covered today’s restricted free agency decisions, so let’s take a look at the other minor moves happening around the league…