In August, the Lions signed Andrew Quarless with the idea that he could help the team on the other side of his two-game suspension. Oddly enough, on the week where Quarless is finally eligible to return to action, the Lions announced that they have released him. 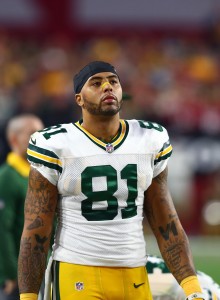 The Lions signed Quarless at a time when they were unsure about the status of starter Eric Ebron. Fortunately, Ebron has been healthy thus far this year. The Lions will forge ahead with Ebron as their main tight end with Cole Wick, Khari Lee, and Orson Charles in support.

Quarless, 28 in October, spent most of the 2015 season on the Packers’ injured reserve. An MCL injury sidelined Quarless for about two and a half months, limiting him to five games and just four receptions for 31 yards for the season. He was probably hoping to take the field against his former team this Sunday, but he won’t get that chance now.

“We are aware of the upcoming NFL suspension of Andrew Quarless,” Quinn said. “We have thoroughly researched the incident that caused the suspension and have talked at length with Andrew about this. Andrew has been forthright and honest about the situation and he has gone through the process within the legal system. As an organization we are comfortable with adding Andrew to the roster and look forward to seeing him compete for the rest of the preseason.”

Quinn said in January he’d have a zero tolerance policy when it came to “domestic violence and dangerous weapons” but he has obviously softened his stance.

Here’s more out of the NFC North:

The Lions have signed tight end Andrew Quarless, Ian Rapoport of NFL.com tweets. As we recently learned, Quarless will be suspended for the first two games of the season following a violation of the league’s personal conduct policy following a misdemeanor gun charge. If he makes the team, the Lions will not get Quarless on the field until Week 3 against the Packers, giving him an opportunity to show his old team what he can do. 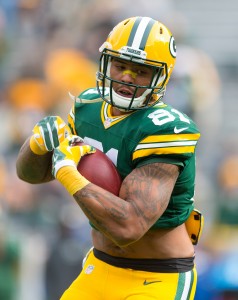 The deal is a low-risk move for Detroit as Quarless’ one-year deal includes no guaranteed cash. Over the next few weeks, Quarless will work to prove his worth to Detroit coaches and, if he cannot leapfrog ahead of UDFA Cole Wick and free agent additions Matthew Mulligan and Orson Charles, he’ll be relinquished back to the free agent pile. If all goes well, Quarless can give the Lions some additional depth at tight end in case Eric Ebron‘s ankle injury lingers.

Quarless, 28 in October, spent most of the 2015 season on the Packers’ injured reserve. An MCL injury sidelined Quarless for about two and a half months, limiting him to five games and just four receptions for 31 yards for the season.

Free agent tight end Andrew Quarless has been suspended for two games for a violation of the league’s personal conduct policy, a source tells Ian Rapoport of NFL.com (on Twitter).

Quarless, 28 in October, spent most of the 2015 season on the Packers’ injured reserve, though he was originally placed on IR with the designation to return. An MCL injury sidelined Quarless for about two and a half months, beginning in late September, limiting him to five games and just four receptions for 31 yards for the season.

The tight end underwent a procedure in early 2016 to drain fluid from his knee and the team subsequently shut him down for the year. While Quarless was on the shelf for most of the season, second-year tight end Richard Rodgers enjoyed a breakout campaign, hauling in 58 balls and racking up eight touchdowns.

FRIDAY, 9:45pm: To fill Quarless’ roster spot, the Packers promoted cornerback Robertson Daniel from their practice squad, Rob Demovsky of ESPN.com reports (on Twitter). Even after the team ruled out Davante Adams for Saturday’s divisional-round game against the Cardinals, the Packers opted not to bring up one of the two receivers on their practice squad. They’ll go with just four vs. Arizona.

THURSDAY, 11:08pm: In advance of their divisional playoff game against the Cardinals, the Packers will be placing tight end Andrew Quarless on the injured reserve list, according to Tom Silverstein of the Milwaukee Journal Sentinel. Quarless himself alluded to the move on his Instagram account earlier today.

“Wanted to be the first to thank all my loyal fans who have supported me this past year,” Quarless wrote. “You all have been a blessings to my life. My season has come to an end not by choice but I will continue to trust God’s plan for my life.”

Quarless, 27, has already spent most of the season on injured reserve, though he was originally placed on IR with the designation to return. An MCL injury sidelined Quarless for about two and a half months, beginning in late September, limiting him to five games and just four receptions for 31 yards for the season.

A source tells Rob Demovsky of ESPN.com that the tight end recently underwent a procedure to drain fluid from his knee, and it seems the Packers had concerns about his health going forward. Once the team makes the move official, there will be an open spot for Green Bay to add a player to the 53-man roster — likely someone from the practice squad.

It’s been a rough year for Quarless, whose July arrest raised doubts about whether he’d even remain with the Packers. While Green Bay did keep him around, Quarless was on the shelf for most of the season as second-year tight end Richard Rodgers enjoyed a breakout campaign, hauling in 58 balls and racking up eight touchdowns.

Occupying the Packers’ IR-DTR slot since Sept. 30, Andrew Quarless could help the team down the stretch after being activated today.

A sixth-year tight end, Quarless started 21 games for Green Bay during the 2013-14 campaigns but saw his stock plummet after an offseason arrest. The 27-year-old caught two passes for 14 yards in the three games he played in September.

Montgomery hasn’t played since Week 6 after suffering a high-ankle sprain that’s lingered since. The 22-year-old receiver caught 15 passes for 136 yards and two touchdowns for the receiver-depleted Packers this season.

The Falcons started the season 5-0 and looked like a surefire playoff team, but they’ve lost five of their last six games to drop to 6-5. Their postseason hopes are now in serious jeopardy, and one reason for their skid is the lackluster play of quarterback Matt Ryan. During their four-game losing streak, the Falcons have averaged fewer than 17 points per game and Ryan has thrown just seven touchdowns against six interceptions. Two of those picks came in a crucial 20-10 loss to the Vikings on Sunday. Afterward, owner Arthur Blank and head coach Dan Quinn expressed confidence in Ryan, a three-time Pro Bowler who has been the Falcons’ QB since they drafted him third overall in 2008.

“He’s demonstrated his abilities over eight years. He’ll be fine. He’ll be good,” Blank said, according to Vaughn McClure of ESPN.com.

Added Quinn, who said he isn’t thinking about benching Ryan or anyone else, “He’s absolutely the competitor that I want. He’s what we look for and our team looks for the whole way.”

The Packers announced that they have placed tight end Andrew Quarless on injured reserve – designated to return. The designation will allow Quarless to return to the club in eight weeks.

Quarless suffered an MCL sprain in Monday night’s game against the Chiefs. Their usage of the IR-DTR spot on Quarless comes as a bit of a surprise, but the Packers view him as an important offensive weapon and they want him back on the field in 2015.

Quarless, 27 on Tuesday, hasn’t made a major offensive impact thus far in 2015. Through three games (really two games and a piece of a third), Quarless has a grand total of two catches off of two targets. In each of the previous two seasons, Quarless has hauled in ~30 catches for 300+ yards.

This offseason, many expected Quarless to compete with Richard Rodgers for the starting tight end job and possibly unseat him. However, it was Rodgers that came out with the No. 1 job after the summer competition. The Penn State alum’s offseason arrest probably didn’t help matters. Quarless reportedly fired a pair of rounds following an argument with two women at a South Beach parking garage in July. When police pursued the vehicle he was riding in, the tight end tried to hide outside a restaurant and conceal his weapon in a potted plant.

Quarless is in the second year of a two-year, $3MM pact. In the four seasons leading up to this year (he missed the 2012 season with a knee injury), Quarless has compiled 85 receptions for 909 yards few six touchdowns. In 2014, he set career highs in yards (323), touchdowns (three), and first downs (20).