The Buccaneers have made it official: Blaine Gabbert is headed back to Tampa to serve as the backup to Tom Brady. His one-year deal is “guaranteed,” according to NFL.com’s Ian Rapoport (on Twitter).

Gabbert, 31 in October, joined the Bucs this time last year. Unfortunately, his season ended before it could even begin, thanks to a dislocated shoulder suffered in the preseason.

Before that, Gabbert saw time in eight games (including three starts) for the Titans. As the QB2 to Marcus Mariota, he completed 60.4% of his passes for 626 yards, four touchdowns, and four interceptions.

Now, he’ll serve as Brady’s clipboard holder while continuing his relationship with head coach Bruce Arians. Arians coached Gabbert in Arizona, including the 2017 season in which he started five games. 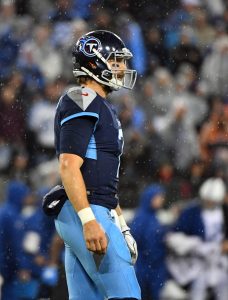 After acquiring Ryan Tannehill earlier today, the Titans are set to cut one of their other quarterbacks. Jim Wyatt of TitansOnline.com reports (via Twitter) that the team will release Blaine Gabbert.

The 29-year-old spent last season as Marcus Mariota‘s primary backup. In eight games (three starts), Gabbert completed 60.4-percent of his passes for 626 yards, four touchdowns, and four interceptions. The 2011 first-round pick has had stints with the Jaguars, 49ers, Cardinals, and Titans during his eight-year career, and he’s presumably set to add another team to that list this offseason.

The Titans gave up a 2019 seventh-rounder and a 2020 fourth-rounder in exchange for Tannehill and a 2019 sixth-rounder earlier today. The front office subsequently reworked their acquisition’s 2019 contract, although the veteran is still set to be among the highest-paid backup quarterbacks in the NFL. As a result, it’s not entirely surprising that the Titans decided to move on from Gabbert. His release will provide Tennessee with $1.5MM cap savings vs. $500K in dead cap.

Considering Mariota’s extensive injury history, it’d be surprising if the Titans don’t add another quarterback to the mix during the offseason. Even if the team rolls into the regular season with only two quarterbacks on the roster, we’ll presumably see the team give a third-stringer some reps during the preseason.

Marcus Mariota‘s injury remains a mystery. It hasn’t been disclosed exactly what he’s dealing with although it has reportedly caused him to lose some feeling in his hand. Blaine Gabbert started, and won, for the Titans last week, and it’s possible he’s asked to do so again this week against the Jaguars.

Titans coach Mike Vrabel told reporters that he would make the decision between Gabbert and Mariota within the next “24 hours” and that he would let them know then according to Jim Wyatt of the Titans’ official website (Twitter link). If Mariota can’t go it would be a huge blow for Tennessee against the league’s top defense. One thing that could make their matchup a bit easier is that Jalen Ramsey was added to the injury report Friday with an ankle injury, although it’s unclear if he’s in any danger of missing the game.

Here’s more injury updates from around the league:

Marcus Mariota experienced difficulty gripping the ball after suffering a Week 1 elbow injury, but he could well return for the Titans this week. However, he doesn’t appear to be at full strength. Blaine Gabbert stands to see time as well as an apparent result. Mike Vrabel said he expects to use both of his quarterbacks against the Texans, via Jim Wyatt of TitansOnline.com (on Twitter). Mariota hasn’t made much progress since his injury in Tennessee’s opener and was still experiencing tingling in his throwing arm as of Wednesday, per Terry McCormick of TitanInsider.com, making this an interesting situation for a Titans team with playoff aspirations. If Mariota fails to progress by Sunday, it wouldn’t be hard to envision the Titans sitting him. Gabbert filled in for an injury-ransacked Cardinals team last season, making five starts (including a 12-7 win over the Titans). He completed 11 of 22 passes in a loss to the Dolphins last week.

Here’s the latest on the AFC injury front heading into Week 2:

David Tepper may have been a minority owner of the Steelers before purchasing the Panthers for a league-record $2.275 billion, but he does not exactly fit the mold of your prototypical NFL owner. In a fascinating piece on the self-made billionaire, Kent Babb of the Washington Post describes how the enigmatic, unpolished Tepper could clash with the majority of the league’s straightlaced owners, and he wonders whether the league will ultimately change Tepper, or if Tepper might change the league. One way or another, Babb’s piece is worth a read.

The Titans have agreed to sign quarterback Blaine Gabbert, the team announced. Terms of the deal are not yet known. 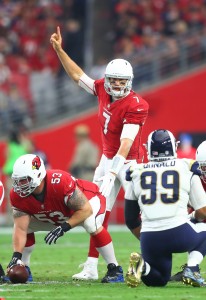 Gabbert spent the last season with the Cardinals and wound up starting five games after injuries took Carson Palmer and Drew Stanton out of action. All in all, he completed just 55.6% of his passes for 1,006 yards with six touchdowns against six interceptions. He’ll now serve as Marcus Mariota‘s backstop in Tennessee.

The Titans released Matt Cassel earlier this month, putting them in the market for a reserve QB. Mariota has dealt with a broken leg and a hamstring issue in the last two seasons, so the Titans wanted an experienced insurance policy in the event that he goes down.

The Titans now roster three QBs in Mariota, Gabbert, and 2017 undrafted free agent Tyler Ferguson. In theory, they seem set at the position, but they could bring in some competition for the third spot on the QB depth chart between now and training camp.

Free agent quarterback Blaine Gabbert has taken a visit with the Titans, according to Adam Schefter of ESPN.com (Twitter link). 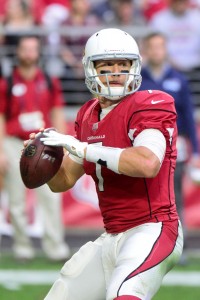 Tennessee is in the market for a backup quarterback after releasing Matt Cassel earlier this month. While starter Marcus Mariota has been healthy for 15 regular season games in each of the past two seasons, he’s a mobile quarterback who may be more susceptible to injuries, so rostering a quality No. 2 signal-caller is critical for the Titans.

Mariota fractured his fibula during the 2016 campaign, and dealt with hamstring issues in 2017, but each ailment only cost Mariota one contest (the former due to the timing of the injury). Aside from Mariota, the only other quarterback on the Titans’ roster is 2017 undrafted free agent Tyler Ferguson, who has never attempted an NFL pass.

Gabbert, of course, was a top-10 selection in the 2010 draft, and while he’s never lived up to that billing, he’s carved out an NFL career that is now entering its seventh year. In 2017, Gabbert suited up for the Cardinals and ultimately started five games when injuries struck Carson Palmer and Drew Stanton. During that time, the 28-year-old Gabbert completed 55.6% of his passes for 1,006 yards, six touchdowns, and six interceptions.