Brian Orakpo will call it quits after 10 NFL seasons. The veteran outside linebacker announced his retirement on Monday. 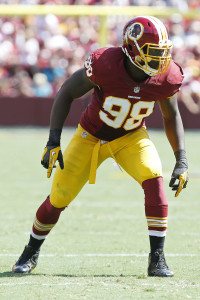 He was battling an elbow injury and did not play in the final three Titans games this season. Prior to missing time, Orakpo had never missed a game in his four-year Tennessee tenure.

The former Titans and Redskins defender was a four-time Pro Bowl honoree and was slated for free agency after this season. He signed a four-year, $31MM contract with the Titans during the 2015 offseason and played it out. He only registered 1.5 sacks this season but finished his career with 66. The Texas product recorded three double-digit sack seasons, with his 2009 rookie slate producing a career-high 11.

Washington kept Orakpo for six seasons as an old-CBA first-round pick but prioritized an extension for Ryan Kerrigan in 2015. That duo teamed up for four seasons, from 2011-14. Orakpo, 32, paired with Derrick Morgan in Tennessee to form a long-term edge partnership. The Titans brought in second-round pick Harold Landry this year.

Orakpo ranks in the top six on the Redskins’ and Titans’ (Nashville era) all-time sack lists.

The NFL announced the 2017 Pro Bowl rosters earlier tonight, and aside from determining which players will spend a week in Orlando early next year, the rosters also dictate several important bonuses and/or contract escalators for individual players. Former NFL agent and current CBSSports.com contributor Joel Corry has rounded up the notable incentives earned tonight, and we’ll pass those along below. As Corry notes (Twitter links), only first ballot Pro Bowlers who actually participate in the game (unless injured or playing in the Super Bowl) can earn bonuses, which are typically paid out by the end of March.

Here are some key details on some of the notable contracts agreed to or signed by free agents this week:

1:39pm: The Titans have now officially announced their deals with Orakpo, Morgan, and the three other players they agreed to sign today (Twitter link).

7:05am: After staying relatively silent throughout the first few days of 2015’s free agent period, the Titans have made their big splash on Friday morning, fortifying their defense with a pair of pass rushers, per multiple reports. According to Adam Schefter of ESPN.com (via Twitter), the team has agreed to terms with former Washington linebacker Brian Orakpo. Meanwhile, Jim Wyatt of the Tennessean reports (via Twitter) that the club has also reached a deal to re-sign its own marquee free agent, Derrick Morgan. Both players will be signing lucrative four-year contracts with Tennessee. Mike Garafolo of Fox Sports has the terms on both deals, tweeting that Orakpo’s four-year pact will have a $32MM base value, with $13.5MM guaranteed, and can be worth up to $35MM overall. Morgan’s deal is worth just a little less, with a max value of $30MM, a base value of $27MM, and $10.5MM in guarantees, tweets Garafolo.

The pair of signings are extra intriguing for a Titans defense that will be bringing aboard former Steelers defensive coordinator Dick LeBeau for the coming season. Having made the switch to a 3-4 scheme a year ago, the Titans went through some growing pains en route to a 2-14 record, but LeBeau is expected to help smooth things out in 2015, and having a pair of talented pass rushers like Orakpo and Morgan on the outside should only help that transition.

Orakpo, 28, is coming off a disappointing 2014 season that ended after just seven games when he tore his pectoral muscle and was placed on injured reserve. Still, despite the fact that he logged just 0.5 sacks last year, the former first-round pick was viewed as one of the top free agent players a year ago, when he was coming off a 10.5-sack season and earned a franchise tag from Washington.

Orakpo, who had a multi-day visit to Tennessee this week and was expected to eventually visit the Cardinals if he didn’t work something out with the Titans, was ranked as the NFL’s fourth-best 3-4 outside linebacker in 2013 by Pro Football Focus’ grades (subscription required). Per PFF, Orakpo racked up an impressive 51 total quarterback pressures in ’13.

As for Morgan, his return to Tennessee is a little surprising, since he is considered a better fit as a 4-3 defensive end, and has never really lived up to his first-round billing in five seasons with the Titans. However, despite modest sack totals (his 6.5 in 2014 matched a career high), Morgan graded as a top-10 outside linebacker according to PFF, which ranked him eighth in 2014 and credited him with 49 total quarterback pressures.

Morgan paid visits to the Falcons and Buccaneers this week, and was reportedly scheduled to hit Dallas for a meeting with the Cowboys next. Instead, he’ll be returning to Tennessee, where LeBeau will be tasked with getting the most out of the former 16th overall pick, who will be entering his age-26 season.

When I ranked PFR’s top 50 free agents last weekend, both Orakpo and Morgan squeezed into the top 20, at 19th and 20th respectively. Outside of Greg Hardy, who has his share of off-field question marks, the two players looked like the clear-cut top pass rushers still available as we neared the end of the first week of free agency. The Titans did well to get them both, and if the club were to add to its front seven next month by drafting a player like USC’s Leonard Williams to complement Jurrell Casey, the defense in Tennessee could look significantly more dangerous heading into the 2015 season.

The Chargers still have over $21MM in cap space, and could look to spend that money to add to the team this offseason. Meanwhile, star safety Eric Weddle is coming into the last year of his contract and is unsure of his future with the team, writes Eric D. Williams of ESPN.com.

“I think I’ve earned [a new deal],” Weddle said. “But it has to work both ways. They have to want it, too. And if they don’t, then we will play it out and I’ll be a free agent next year “I want to be here, but I understand the situation and what they want to do. If I’m a part of it — great. If not, then I plan on making this season a memorable one and we’ll see what happens from there.”

Derrick Morgan won’t be signing with the Buccaneers, according to Vaughn McClure of ESPN.com (on Twitter). The Falcons are out on Morgan too after signing Adrian Clayborn, Terry McCormick of TitanInsider.com tweets. More free agent news from around the league..

As we wait for Thursday’s free agent action to ramp up, let’s check in on some items from around the AFC South….

Speaking to reporters today, Brandon Graham said he felt like there was only ever a “10% chance” that he’d sign with a team besides the Eagles (Twitter link). The Giants and Titans were known to be in the running for the free agent edge defender. More out of the NFC..