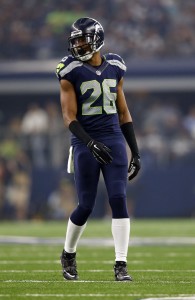 Williams, 31, signed a three-year deal with the Seahawks prior to the 2015 season. Unfortunately, things didn’t go as planned and Seattle cut him loose after ten games. Pro Football Focus ranked the veteran 102nd out of 118 qualified cornerbacks at the time of his release last month. Williams was inactive for his final two games with the Seahawks before he was cut. In January, Williams hooked on with the Redskins and appeared in their lone playoff game.

Williams didn’t play his best football in Seattle, but he does offer plenty of experience with 75 starts on his resume. Now, he’s looking for his next NFL opportunity and the Bears could have interest.

Here are some PFR-exclusive updates on three veteran free agents:

Washington will add some veteran secondary depth to its 53-man roster in advance of this weekend’s playoff game against the Packers, according to Adam Schefter of ESPN.com,

who reports (via Twitter) that cornerback Cary Williams is signing with the the club.

After spending several seasons as a starting cornerback for the Ravens and Eagles, Williams signed a three-year, $18MM deal last March with the Seahawks, looking to step in as a replacement for departed free agent Byron Maxwell. However, the 31-year-old struggled this season in Seattle, with Pro Football Focus ranking him 102nd out of 118 qualified cornerbacks at the time of his release last month. Williams was inactive for his final two games with the Seahawks before he was cut.

Heading into the postseason, Washington is without top cornerback Chris Culliver, who landed on injured reserve in November, and the team also had two defensive backs – cornerback Dashaun Phillips and safety Kyshoen Jarrett – leave Sunday’s game with injuries. As such, Williams will provide some veteran insurance, and could even step in and play immediately in the Wild Card round.

Eagles quarterback Sam Bradford is a few months from free agency and could be in another uniform next season. If you’re to believe head coach Chip Kelly, he hopes the sixth-year man is under center again for Philadelphia in 2016.

“We’ve always wanted Sam here. We wouldn’t have traded for him if we thought he was (only) going to be here for a year,” Kelly said, per Les Bowen of Philly.com.

Kelly sent former Eagles starting QB Nick Foles and a second-round pick to St. Louis last offseason for Bradford, whose performance in Philly has been a mixed bag. Bradford’s stats aren’t great – 6.71 YPA, 14 touchdowns, 11 interceptions, 82.9 rating in 11 games – but the Eagles have won the last three games the 28-year-old has both started and finished, and Kelly likes the former Heisman winner’s progression.

“I just see improvement from Sam on a weekly basis that gets you excited about him. I thought he threw the ball extremely well (Sunday),” said Kelly, whose Bradford-led Eagles knocked off Buffalo, 23-20, and are atop the NFC East at 6-7.

While none of this year’s crop of collegiate quarterbacks are projected to be as successful as Jameis Winston or Marcus Mariota, NFL personnel men do see four QBs — Memphis’ Paxton Lynch, Cal’s Jared Goff, Michigan State’s Connor Cook, and North Dakota State’s Carson Wentz — as being worthy of a first-round pick, according to Charlie Campbell of WalterFootball.com.

Elsewhere in draft-land, Tony Pauline of DraftInsider.net reports that Penn State signal-caller Christian Hackenberg, once projected as potential first-rounder himself, is likely to enter the draft, and will probably announce as such in the near future. Two other collegiate players — Boise State edge rusher Kamalei Correa and Stanford tight end Austin Hooper — are intent on entering the draft, as well, says Pauline.

Veteran cornerback Cary Williams is paying a visit to the Titans today, according to Aaron Wilson of the National Football Post. It’s the first free agent visit Williams has made since he was released by the Seahawks earlier this week, though we heard he had received interest from several teams, including the Rams.

After spending several seasons as a starting cornerback for the Ravens and Eagles, Williams signed a three-year, $18MM deal in March with the Seahawks, looking to step in as a replacement for departed free agent Byron Maxwell. However, the 30-year-old struggled this season, with Pro Football Focus ranking him 102nd out of 118 qualified cornerbacks. Williams was inactive for his final two games with Seattle before he was cut.

As for the Titans, their secondary has been affected by injuries, with Jason McCourty having landed on IR. The team could use a cornerback to add depth and to complement Perrish Cox and Coty Sensabaugh.

A look around the NFL as Tuesday wraps up:

Less than nine months after signing him to a lucrative three-year contract, the Seahawks have decided to move on from Cary Williams. According to Ian Rapoport of NFL.com (Twitter link), Seattle is releasing the veteran cornerback.

After spending several seasons as a starting cornerback for the Ravens and Eagles, Williams signed a three-year, $18MM deal in March with the Seahawks, looking to step in as a replacement for departed free agent Byron Maxwell. However, the 30-year-old has struggled this season, with Pro Football Focus ranking him 102nd out of 118 qualified cornerbacks. Williams was inactive for the Seahawks’ last two games, coinciding with Jeremy Lane‘s activation to the 53-man roster.

Because Williams’ 2015 salary was fully guaranteed, Seattle will remain on the hook for his full $3.5MM salary and $4.667MM cap hit for this year. Assuming Williams goes unclaimed on waivers, he’ll count for about $2.333MM in dead money against Seattle’s 2016 cap.

The Seahawks have certainly had an eventful Tuesday, orchestrating perhaps the day’s biggest news by acquiring tight end Jimmy Graham and a fourth-round pick from the Saints in exchange for center Max Unger and a first-round selection. Seattle general manager John Schneider spoke to reporters, including Bob Condotta of the Seattle Times, about today’s events, so let’s take look at the highlights:

On how discussions for Graham began:

“We started talking to them probably maybe three days ago, just about general things—lots of different players. This time of year there are a lot of teams that are just trying to move some pieces around to figure some things out as we get close to the deadline to cut down for salary cap purposes to start the new year, and it was no different than a regular call like that. Then he was one of the players who was brought up and we continued to pursue it.”

On his level of surprise at hearing Graham’s name come up in talks:

On losing Unger as part of the deal:

“Any time you’re making these types of trades for a player like this, it’s not just going to be a handover. Both teams had specific needs, for us, we’re going to miss Max’s leadership, he was a core part of what we were doing around here the last several years. He was here when we got here—coach Carroll and his staff actually move him to center for guard, and he really took off. But we have to continue moving this thing forward. We always talk about not having any finish lines, and this is just part of it—tough decisions, but exciting futures as well.”

On how the trade will affect Seattle’s salary cap:

“In some respects it actually helps us. When you take out a first round draft choice like that, the cost of a first-round draft choice is close to 3.5 million. So if we were going to go out and sign a tight end in free agency, and have a huge signing bonus, big paragraph 5, a lot of guaranteed money, that would have hindered some of the things we would have been able to do.”

“We’re going to miss (Byron Maxwell) but we had to be ready to go. I think it’s a testament to coach Carroll, Kris Richard, all of the guys that have worked so hard with our defensive backs; he’s a sixth-round draft choice that leaves for a monster, monster contract and we’re going to miss Byron a lot and we’re excited for him but we’re also very excited to add Cary. We felt like we needed to do it early because of the competition at the cornerback position and feel blessed we were able to finish it up last night.”

6:08pm: The Seahawks have confirmed the transaction, making it official, per Bob Condotta of the Seattle Times (via Twitter).

8:08am: The three-year pact will be worth $18MM, including $7MM in year one, a source tells Wilson (Twitter link).

TUESDAY, 7:26am: Williams is expected to sign a three-year deal with the Seahawks, according to Manish Mehta of the New York Daily News, who tweets that the lack of state income tax in Washington played a part in the cornerback’s decision.

MONDAY, 10:03pm: After drawing interest from numerous clubs, Cary Williams has decided to join the Legion of Boom and sign with the Seahawks, according to Aaron Wilson on the Baltimore Sun (Twitter link). After being released by the Eagles, Williams considered the Ravens, Titans, and Jets before settling on Seattle.

The 30-year-old Williams has started all 16 games in each of the past three seasons, racking up nine interceptions during that time. Miscast as a No. 1 corner with the Eagles, Williams is a perfectly complementary option at defensive back, and he’ll be playing in the best secondary in the league when he arrives in Seattle. The Washburn alum will flip-flop clubs and roles with Byron Maxwell, who agreed to terms on a six-year deal with Philadelphia yesterday.

The Seahawks were also reportedly considering Tramon Williams as an option to replace Maxwell, but they’ll settle for a player who merely shares the surname. Seattle added more secondary help earlier today, agreeing to a deal with ex-Jaguar Will Blackmon, who isn’t a candidate to start.