Joe Judge will turn to another team’s staff to add a key assistant. The new Giants HC is hiring Buccaneers assistant special teams coach Amos Jones to his staff, Tom Rock of Newsday reports. Jones was on the Mississippi State staff during part of Judge’s tenure in Starksville as a player and graduate assistant, and Rock notes the 60-year-old assistant will play myriad roles for Judge. Jones will act as Judge’s right-hand man during game days, helping with in-game strategy, while aiding with analytics and in-week planning as well. Jones has worked in the NFL since 2007, but this appears a more diverse job description compared to the special teams roles he’s previously held in the league. From 2012-18, Jones served as the ST coordinator for the Steelers, Cardinals and Browns. He caught on with Bruce Arians again in Tampa but will join former pupil Judge in New York.

Here is the latest from the coaching/staffing realm:

The Patriots will lose their acclaimed offensive line coach to another retirement. After Dante Scarnecchia‘s return from his previous retirement coincided with three straight Patriots Super Bowls, the 72-year-old assistant will step away again, he confirmed Tuesday (via ESPN.com’s Mike Reiss). Former Patriots tight end Christian Fauria, now with WEEI, was the first to report of Scarnecchia’s intention to retire again. 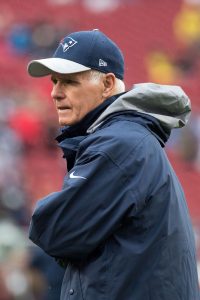 Scarnecchia initially retired after the 2013 season but was coaxed back to the sidelines in 2016. The Patriots perennially field one of the league’s top offensive lines, and their longtime staffer’s presence was certainly no coincidence in that trend. Despite center David Andrews missing the entire season and left tackle Isaiah Wynn out for much of it, Scarnecchia’s latest group rated in the top 10 in Football Outsiders’ adjusted line yards and pass-protection metrics.

While Scarnecchia’s second stint in New England helped the franchise secure its fifth and sixth championships, he spent 34 years on the Pats’ staff. Scarnecchia was a Patriots assistant for 10 of their 11 Super Bowl appearances and 48 of the team’s 59 playoff games, beginning his run with the team in 1982. After a brief stay as the Colts’ O-line coach (from 1989-90, following former Pats coach Ron Meyer to Indianapolis), Scarnecchia spent most of the 1990s as the Pats’ special teams coordinator. He began serving as their offensive line coach in 1999 and held that job for the better part of the next 20 years.

“It was a privilege to coach with Dante for so long,” Bill Belichick said. “I knew that long before his initial retirement and throughout a second act of continued excellence. Dante is among the very best assistant coaches ever.”

Belichick is one of six Patriots HCs with whom Scarnecchia has worked. The Pats replaced Scarnecchia with Dave DeGuglielmo during his 2014-15 sabbatical and will again have to fill some big shoes in filling their 2020 staff.

This also marks the latest veteran coach to leave New England. The Pats lost longtime defensive assistants Matt Patricia and Brian Flores over the previous two offseasons and lost multiple offensive assistants when Flores took the Dolphins’ HC job. While Tom Brady‘s status looms as the top Patriots uncertainty heading into next season, Belichick will need to make a key hire to replace one of the few organizational fixtures whose New England arrival predates Brady’s.

John Ross endured a disastrous rookie season after seeing his stock rise during 2017 Combine weekend. The Bengals‘ 2017 first-round pick did not catch a pass and ended the season on IR after suffering multiple injuries last year. Ross, though, is expected to be ready to run routes come spring despite undergoing shoulder surgery in December. He had both shoulders operated on last year and couldn’t get on the field until the second week of training camp following a spring shoulder surgery.

“That was the problem,” Ross said, via Geoff Hobson of Bengals.com. “My body didn’t respond the way I wanted it to. Coming in late, I didn’t get to train. I was out of shape. That was pretty tough on my body. Rushing into it. Being out of shape. My body couldn’t take the physical aspects of the game we do every day. I thought I could. I think it kind of wore me out faster than I thought.

“I really didn’t catch up until the end of the year when I started to have better practices. It all started to click together. It was already kind of too late. It was best to rest, get my body right.”

Ross has nowhere to go but up and figures to be a bigger part of the 2018 Cincinnati offense than he was last year.

Here’s the latest out of the AFC as new wideouts and cornerbacks aim to break Ross’ 4.22-second 40-yard dash record at the Combine.

Now that the Chiefs have acquired David Amerson and are on the verge of adding Kendall Fuller — once the Alex Smith trade is finalized — Mike Florio of Pro Football Talk wonders if Kansas City could trade Marcus Peters. Peters, whom the Chiefs selected in the first round of the 2015 draft, has quickly established himself as one of the better corners in the league, but as Florio notes, he has been a “handful” for Kansas City, and the incident that got Peters suspended for a game in December may have been the last straw for the team. Florio says “some in league circles” believe Peters could be on the trade block, and Alex Marvez of SiriusXM appears to think it’s a possibility as well (Twitter link).

Let’s take a look at more notes from around the AFC:

The Eagles are gearing up for Super Bowl LII tonight, but their prospects for next season got a nice boost this morning. Ian Rapoport of NFL.com reports that, this Wednesday, Carson Wentz will begin weight-bearing exercises with his brace unlocked for the first time since being placed on injured reserve. That marks a big milestone in Wentz’s recovery, because when he is able to begin weight-bearing exercises, his recovery can proceed as if he had torn only his ACL instead of his ACL and LCL.

When it was revealed that Wentz tore both his ACL and LCL, concern as to whether he would be ready for next season’s opener increased, and it is still far from a given that he will be on the field for Week 1 of the 2018 campaign. But Dr. James Bradley, who performed Wentz’s surgery, said that barring a setback, Wentz should be ready to do some work in training camp and be ready to play in Week 1.

Now for more notes from the league’s east divisions:

Former Jets center Nick Mangold was out of football in 2017, but he hasn’t ruled out a return to the field next season, as Bob Glauber of Newsday writes.

“I’m kind of not closing the door, but I’m not actively searching for anything right now,” said Mangold on Radio Row in advance of the Super Bowl.

Mangold, 34, stayed at home as he dealt with a foot injury suffered during the 2016 season. He told ESPN Radio (Twitter link) that he was never healthy last season, but during his Radio Row trip, he indicated that he could have played at some point in the late fall.

“Maybe midseason, but by that point, it’s the middle of the season, you’ve missed the whole offseason when you get to know people,” he said. “[The foot] still wasn’t right. It was one of those things where I probably could have gone out there and played, but I wouldn’t be playing up to my standards. I wouldn’t want to go out there stealing checks, so that’s why I didn’t go for it, because I wouldn’t have been playing at my level.”

“I don’t know what happened,” Rowe said. “Obviously you want to get better at your position. I didn’t think I did that bad of a job to slide down the depth chart. I wasn’t getting get beat deep. I was getting a lot of pass breakups on deep balls and I know I probably needed to start pulling some of them down for interceptions but I don’t think that was the reason. I don’t want to say I took it personally or as a personal shot. This is a business at the end of the day. I felt like when I got traded that it was just another opportunity to keep getting better. Just to stay in the NFL is tough. Just to get another shot is a blessing.”

Rowe’s 26 tackles and one interception on the year aren’t that impressive, but he has been a major contributor as of late and he looks like he’ll be worth the conditional 2018 fourth-round draft choice for New England.

Dolphins owner Stephen Ross created a bit of a stir on Monday when he said, per Jeff Ostrowski of the Palm Beach Post, “After three years, if we haven’t made the playoffs, we’re looking for a new coach. That’s just the way it is. The fans want it.” However, Ross associates tell Adam Beasley of the Miami Herald that the owner was referring to general NFL trends, not specifically addressing Adam Gase’s situation in Miami.