The Chiefs have agreed to trade running back DeAndre Washington to the Dolphins, as Ian Rapoport of NFL.com tweets. In exchange, Miami will send draft pick compensation to Kansas City. 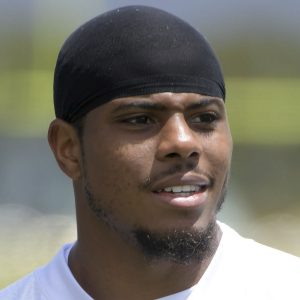 The Dolphins have been on the lookout for backfield help in recent weeks, as evidenced by their pursuit of Le’Veon Bell. Bell ultimately landed with the Chiefs, leaving the Dolphins to settle for one of his backups.

It’s not the ideal consolation prize, but Washington did flash ability as a rookie with the Raiders, when he averaged more than five yards per carry. And, last season, he gained 162 yards as he started in the Raiders’ final two games.

The 27-year-old will join an RB group that currently includes Myles Gaskin, Matt Breida, and Jordan Howard. Meanwhile, the Dolphins won’t have to do much roster juggling to accommodate him after sending wide receiver Isaiah Ford to the Patriots earlier today.

Running back DeAndre Washington won’t end up seeing the field as a Chief. Kansas City has informed him he’ll be released, Field Yates of ESPN.com tweets.

Washington signed with the team on a one-year deal back in April. The former Raider had figured to mix in behind rookie starter Clyde Edwards-Helaire, but Andy Reid is clearly comfortable with Darrel Williams and second-year pro Darwin Thompson as the backups.

Washington had previously seemed like a good bet to make the roster after Damien Williams opted out of the season due to COVID-19. He received the most significant run of his career with the Raiders last year, getting 108 carries thanks to an injury to Josh Jacobs.

He became the starter for the last two weeks, carrying the ball 40 times for 162 yards. He finished the season with 387 yards and two touchdowns, adding 36 receptions for 292 yards. The Texas Tech product should catch on soon with a team in need of a running back who can catch the ball out of the backfield.

A four-year Raiders backup will change sides within the AFC West. The Chiefs have agreed to terms with DeAndre Washington, according to Yahoo.com’s Terez Paylor (on Twitter). It’s a one-year deal.

Washington served as the backup to Latavius Murray, Marshawn Lynch, Doug Martin and Josh Jacobs during his career and, due to the lack of tread on his tires as a pro, serves as an interesting addition for the Chiefs.

The former fifth-round pick has amassed just 370 NFL touches; he topped out at 108 carries last season. He will join a Chiefs team that has Damien Williams, Darrel Williams and Darwin Thompson under contract. This will also reunite Washington with his former college quarterback, with the ex-Red Raider having entered the NFL one year earlier than Patrick Mahomes.

The 5-foot-8 back recently turned 27 and has not posted a yards-per-carry average north of 4.0 since his rookie season, when both he and Jalen Richard surpassed 5.0 per tote. Last season, however, he gained 162 yards in starting the Raiders’ final two games. In his final season with Mahomes, Washington rushed for 1,492 yards (6.4 per carry) and totaled 16 touchdowns.

Jon Gruden and Mike Mayock opted to extend Richard, pointing to a Washington exit. Richard doubles as one of the few Reggie McKenzie-era players making the trip to Las Vegas. The Raiders, of course, are likely to have Jacobs as their backfield centerpiece for years.

It’s possible that DeAndre Washington will return to the Raiders, but not before he chats with some other teams, according to Vic Tafur of The Athletic hears.

Last week, the Raiders re-upped Jalen Richard on a two-year, $7MM deal with $4.6MM guaranteed that could pay up to $8MM through performance bonuses. That deal doesn’t necessarily push Washington out of the picture, but the Raiders’ feeling is that it might be hard to keep both ‘backs, Tafur hears.

Washington, meanwhile, is still scheduled to reach free agency in March. Serving as the other backup to rookie Josh Jacobs, Washington had 108 carries for 387 yards (3.6 yards per carry) versus Richard’s 39 carries for 145 yards (3.7 ypc, in a smaller sample). Their receiving numbers were somewhat similar, too – Washington had 36 grabs for 292 yards; Richard had 36 catches for 323 yards.

Richard was prioritized over Washington, in part, for his route-running and pass-blocking. Both Richard and Washington stand at 5’8″ and Tafur notes that the Raiders could probably use a larger back in the mix.

Washington, who turns 27 later this month, first joined the Raiders as a fifth-round pick in 2016. As a rookie, he impressed with 5.4 yards per tote on a limited sample size of 87 carries. Since then, he’s been a solid backup for the silver-and-black, but he has yet to replicate that production. Over the course of his four-year rookie deal, he’s earned a total of $2.34MM in base salary.