De’Anthony Thomas is sticking in Baltimore for at least one more season. Jeff Zrebiec of The Athletic reports (via Twitter) that the receiver/returner has re-signed with the Ravens. It’s a one-year deal for the 27-year-old. 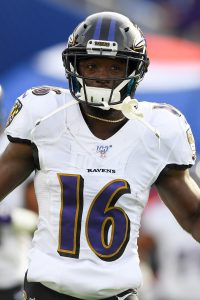 The 2014 fourth-round pick spent the first five-plus seasons of his career with the Chiefs, and he earned a spot on the Pro Football Writers Association’s All-Rookie Team following his first year in the league. That rookie campaign proved to be Thomas’s best season in the NFL both offensively and in the return game.

Thomas re-signed with the Chiefs last offseason, but he was placed on the reserve list after violating the league’s policy on substance abuse. He was activated in mid-September, but he was released by the organization about a month later.

The wideout ended up catching on with the Ravens, and he proceeded to appear in eight games for his new team. While he really didn’t do anything offensively, he had 23 combined kick and punt returns, including three kick returns of 20+ yards.

The Chiefs released wide receiver De’Anthony Thomas, according to a team announcement. In a related move, quarterback Kyle Shurmur was promoted to the 53-man roster.

Thomas spent the last five years with the Chiefs, but his 2018 season was brought to a screeching halt after he broke his leg. Then, in January, an arrest for marijuana possession hurt his free agency stock. Before all of that, Thomas saw time both as a returner and receiver for KC. After some time away, he circled back to the club in August, but only managed 4.2 yards per punt return, well below his career average of 8.8 yards per attempt.

Shurmur, the son of Giants head coach Pat Shurmur, surpassed Jay Cutler as Vanderbilt’s all-time leader in passing yards and completions before leaving school. He’ll help backstop the Chiefs as they await the return of Patrick Mahomes. In the interim, KC will use Matt Moore as their starter.

The Chiefs have signed wide receiver De’Anthony Thomas, according to a press release. In a related move, the Chiefs waived fellow wideout Davon Grayson.

Thomas spent the last five years with the Chiefs, but his 2018 season was brought to a screeching halt after he broke his leg. Then, in January, an arrest for marijuana possession hurt his free agency stock. Before all of that, Thomas saw time both as a returner and receiver for KC.

On Tuesday morning, the Chiefs facilitated another reunion by signing guard Jeff Allen.

De’Anthony Thomas is heading to the injured reserve. James Palmer of NFL Network reports (via Twitter) that the Chiefs have placed the wideout on the IR. They’ve promoted safety Leon McQuay from the practice squad to take the open roster spot.

This isn’t unexpected, as we learned yesterday that Thomas had broken his leg in a “freak accident.” Another player reportedly stepped on Thomas’ leg, causing a fracture close to the one he suffered in the last game of the 2017 season. The team doesn’t believe the 25-year-old will need to have surgery, and he’ll be eligible to be activated from the IR after he sits out eight games.

The 2014 fourth-round pick has spent his entire career with Kansas City. He hadn’t played the biggest role on offense this season, hauling in only three catches for 29 yards and a touchdown. He also had a single six-yard carry. The Oregon product also contributed on special teams, returning three kicks and one punt while compiling four tackles. With Thomas out of the picture, Demarcus Robinson and Marcus Kemp will have more opportunities to contribute on offense.

McQuay, a 2017 sixth-round pick by the Chiefs, was waived by the team following the preseason. He quickly caught on with Kansas City’s practice squad, where he’s spent the entire season. The USC product appeared in one game last season, compiling four tackles and one pass defended.

The Chiefs’ injury report continues to grow in advance of their Sunday night game against the Patriots. Wide receiver De’Anthony Thomas broke his leg in a “freak accident,” according to trainer Rick Burkholder.

Another player stepped on Thomas’ leg, causing a fracture close to the one he suffered in the last game of the 2017 season. Fortunately, the team does not believe that Thomas will need to have surgery, but his status for this season is murky.

Through five weeks, Thomas has three catches for 29 yards and a receiving touchdown, plus one carry for six yards. Thomas has also been involved in the return game, including a punt return for 48 yards against the Steelers.

The Chiefs have five other receivers on the roster, so they won’t necessarily have to sign anyone to fill in for Thomas. Tyreek Hill, Sammy Watkins, Chris Conley, Demarcus Robinson, and Marcus Kemp make up the rest of KC’s receiving corps.

Although a report on Monday suggested that Ohio State defensive end Joey Bosa remains in the mix for the Titans with the first overall pick, Ole Miss offensive tackle Laremy Tunsil still appears to be the overwhelming favorite to be Tennessee’s pick, as Jason Cole of Bleacher Report (video link) outlines. According to Cole, the fact that Tunsil won’t run a 40-yard dash and is dealing with a lingering hamstring issue shouldn’t have any real impact on his draft stock.

Still, while Tunsil is the odds-on favorite to be the first player off the board next month, not everyone agrees he should be. Writing for the Florida Times-Union, Hays Carlyon makes the case that the Titans should select Florida State defensive back Jalen Ramsey first overall. As Carlyon details, landing Ramsey would fill a hole for Tennessee and would keep a talented defender away from the division-rival Jaguars, who would probably love to grab him with the fifth overall pick.

As we look forward to seeing what Tennessee decides, let’s round up a few more updates from around the AFC…

The 49ers and Chiefs have discussed a trade that would send De’Anthony Thomas to San Francisco, according to John Middlekauff of 95.7 The Game (on Twitter). The wide receiver and return specialist is an Oregon product, which probably goes a long way towards explaining coach Chip Kelly‘s affinity for him.

Thomas, 23, was a fourth-round pick of the Chiefs in 2014. Over the last two seasons, Thomas has returned 63 punts for an average return of 10 yards plus one touchdown in the ’14 campaign. He has also been effective in a small sample size of kick returns, taking 20 kicks back for an average of 28.3 yards.

Thomas was the club’s primary punt returner in the first half of the 2015 season, and handled the occasional kickoff as well. The youngster also saw some action on offense, with 174 total yards and two touchdowns on 17 receptions and nine carries. Wide receiver Frankie Hammond took over punt-return duties after Thomas was placed on the NFI list in December.