After examining Jaylon Johnson‘s shoulder, Dr. Peter Millett wrote a letter to NFL teams to let them know the Utah cornerback is ahead of schedule on his shoulder recovery (Twitter link via NFL.com’s Tom Pelissero). That piece of good news should keep Johnson squarely in the first- conversation in next week’s draft. 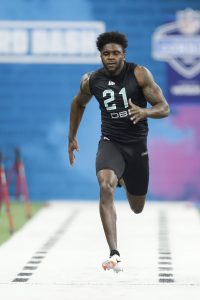 The expectation is that Johnson will make a full recovery “without any restrictions or limitations” and be ready for full participation in early August. That injury, more or less, is the only thing that could keep Johnson out of the top 32. The Utah product has been on the national radar since his sophomore season, when he notched four interceptions – including a pick-six. Last year, he added two more picks to his stockpile as quarterbacks avoided him whenever possible.

At the pro level, Johnson projects as a solid outside corner with the ability to also play in the slot. Ohio State’s Jeff Okudah figures to be the first corner off the board on Thursday, but Johnson won’t be left waiting for long. The Niners could entertain Johnson at No. 13; ditto for the Falcons (No. 16), Cowboys (No. 17) and Raiders (No. 19). NFL.com’s Daniel Jeremiah pegged the Vikings to take Johnson at No. 22 overall – if that’s not Johnson’s floor, it’s probably close to it. Still, like every other prospect, Johnson will be watching anxiously as the picks come in.

On his latest big board, Bleacher Report’s Matt Miller slotted Johnson as his No. 4 corner in the draft, behind Okudah, Florida’s C.J. Henderson, and TCU’s Jeff Gladney.