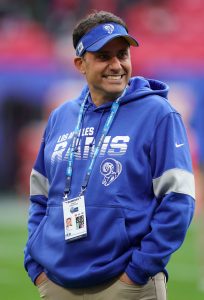 The Patriots are hiring him away from the Rams, where Fisch served as a senior offensive assistant under Sean McVay for the past two seasons. Right before joining the Rams, he was the offensive coordinator and then interim head coach at UCLA. Fisch has never been a full-time head coach, but he’s held a number of prominent assistant jobs. He served as the Jaguars’ offensive coordinator for a couple of years a handful of seasons ago, and he’s still only 43. He also served as Jim Harbaugh’s passing game coordinator at Michigan for two years.

Josh McDaniels currently serves as New England’s offensive coordinator and quarterbacks coach, so it’s possible Fisch is coming on under a similarly vague title that he held in Los Angeles. The Patriots have once again had some turnover on their staff, with special teams coordinator and receivers coach Joe Judge landing the head job with the Giants.

After losing former quarterbacks Zac Taylor (who was formally announced as the Bengals’ new head coach last week), the Rams are re-shuffling their offensive staff. Shane Waldron will be promoted from tight ends coach to quarterbacks coach while retaining his title as Los Angeles’ passing game coordinator, according to Albert Breer of TheMMQB.com (Twitter links). Meanwhile, senior offensive assistant Jedd Fisch will be named assistant coordinator/offense. 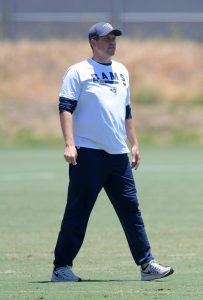 How much these changes will actually affect the day-to-day — and game-to-game — operations for the Rams’ offense is unclear. Head coach Sean McVay will continue to call offensive plays, and Los Angeles still hasn’t formally replaced former offensive coordinator Matt LaFleur since he left for Tennessee following the 2017 season.

But the moves are considered steps-up. As Breer notes in indicating Waldron will keep his passing game coordinator title, Waldron is merely shifting his position of focus — he’ll be as involved in the Rams’ offense as he ever was, if not more so. Waldron, who has also spent NFL time with the Patriots and Redskins, interviewed for Cincinnati’s head coaching vacancy earlier this year but lost out to his ex-coworker Taylor.

Fisch, meanwhile, now has a title that sounds the closest to “offensive coordinator” of anyone on the Rams’ staff. The Jaguars’ OC from 2013-14, Fisch joined Los Angeles in 2018 and serves as the club’s clock management specialist. He interviewed for the head coaching job at Temple University earlier this year.

We heard in early January that the Seahawks would begin contract negotiations with star QB Russell Wilson “soon,” but Adam Schefter of ESPN.com writes that the two sides have yet to have a single contract discussion. Wilson is under club control through the 2019 season and is set to earn $17MM next year, and he has previously stated he would be willing to play out the final year of his deal and perhaps go year-to-year under the franchise tag. But as Bob Condotta of the Seattle Times observes, the fact that Wilson and the Seahawks have not talked contract yet does not mean much (Twitter link). He says the team will get through other team-building matters first and then start exploring extensions, just as it did when it came time to explore a new deal with Wilson in 2015.

Now that the head coaching carousel is pretty much wrapped up, everyone’s attention will now be turning to the assistant coaching ranks. One team that has a lot to sort out is the Broncos, now that we know Gary Kubiak won’t be joining as the team’s offensive coordinator. Broncos defensive backs coach Greg Williams won’t be returning next year, according to Mike Klis of Denver 9News (Twitter link). In a separate tweet, Klis writes that league sources told him Bears defensive backs coach Ed Donatell will be a “top target” of new Broncos coach Vic Fangio to join his defensive staff. In a third tweet, Klis notes that the Browns are targeting Chris Strausser, who currently coaches the Broncos’ offensive tackles, to join Freddie Kitchens’ staff in Cleveland.

Here’s the latest from the coaching circuit:

On the heels of a 3-13 season, the Jaguars have parted ways with offensive coordinator Jedd Fisch, according to Michael DiRocco of ESPN.com (via Twitter). At this point, it’s the only notable change to the team’s coaching staff or front office.

Fisch, 38, was hired in January 2013, just two days after Gus Bradley was named Jacksonville’s new head coach. During his two years in Jacksonville’s Fisch’s offense has been perhaps the league’s worst — according to Football Outsiders, the Jags ranked 32nd in offensive DVOA in 2013, and placed 31st in 2014, ahead of only the 2-14 Buccaneers. Led by rookie quarterback Blake Bortles, Jacksonville’s offense also finished 31st in pass yards, with the club averaging an NFL-worst 15.6 points per game.

As Ryan O’Halloran of the Florida Times-Union observes (via Twitter), Bradley has become close with Marc Trestman, who was fired by the Bears yesterday. In O’Halloran’s view, Trestman could be a top candidate for the Jaguars’ newly-opened offensive coordinator position.

We took a look at ESPN’s NFC mailbags earlier this morning. Let’s now focus on notes from the AFC…