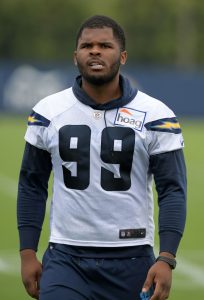 Jerry Tillery Ahead Of Schedule

Good news for Notre Dame defensive tackle Jerry Tillery. The potential first-round pick is ahead of schedule in his rehab from shoulder surgery, Ian Rapoport of NFL.com (on Twitter) hears. 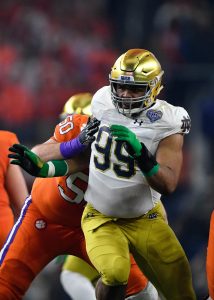 Tillery is expected to be ready to for all football activities by early July, which should help his draft stock heading into Thursday. The DT met with the Broncos, Chiefs, Eagles, Colts, and four other teams in the lead-up to the draft and any one of those clubs could consider him towards the end of the first round.

Analysts are high on Tillery’s potential and given the latest news, it would be a surprise if he lasted until the third round. The youngster offers upside as a defensive tackle in 4-3 schemes but can also fit as an end for 3-4 clubs.

In his final year with the Fighting Irish, Tillery registered seven sacks and 8.5 tackles for a loss. It also helps that Tillery had a strong showing at the combine, including the best SPARQ score (a measurement of overall athleticism) of any defensive linemen.

Notre Dame defensive lineman and NFL draft prospect Jerry Tillery underwent surgery to repair a torn labrum and will be sidelined for three-to-four months, according to Ian Rapoport of NFL.com (Twitter link).

Given his recovery timeline, Tillery should be ready for training camp, so it’s unclear just how much this news will affect his draft stock. Still, in a draft loaded with defensive line talent, it’s fair to wonder if Tillery’s operation will push him ever so slightly down draft boards.

Tillery, who stands 6’7″, 305 pounds, just wrapped up his Notre Dame career after appearing in 42 games during a four-year run. Last season, he posted seven sacks and 8.5 tackles for loss in 12 contests. Most draft rankings have Tillery as a borderline first-round pick, but his stock had been rising after an excellent combine. Notably, Tillery ranked first among draft-eligible defensive linemen in SPARQ score, a measurement of overall athleticism.

In his scouting report on Tillery, Lance Zierlein of NFL.com compared the Notre Dame product to the Steelers’ Stephon Tuitt, noting the former’s “scary natural power.” Joe Marino of The Draft Network is also a fan of Tillery, but noted he must improve his leverage.