Shanahan indicated Verrett is dealing with an injury that’s similar to Bosa’s ankle issue. Earlier today, 49ers general manager John Lynch said that while Bosa doesn’t have a high ankle sprain, his injury does have “elements” of a high ankle sprain. Like Bosa, Verrett will sit out the preseason and then be re-evaluated before the regular season gets underway.

Verrett’s injury, of course, is especially concerning given the 28-year-old’s lengthy history of health questions. He’s only played in five total games over the past three seasons, with various injuries — including a torn ACL and a ruptured Achilles — ending his campaigns. Injuries have been such a detriment to Verrett’s career that he actually considered retiring before landing a one-year, $3MM deal with the 49ers this offseason.

Meanwhile, fellow 49ers cornerback K’Waun Williams will also be absent for the preseason after undergoing a knee scope, tweets Matt Barrows of The Athletic. Williams played 615 total snaps for San Francisco in 2018 while serving as the club’s primary slot corner.

The 49ers have signed cornerback K’Waun Williams to a three-year extension that will keep him in San Francisco through 2020, the club announced today. The new deal is worth $10MM, contains $5MM guaranteed, and has incentives attached, according to Ian Rapoport of NFL.com (Twitter link). 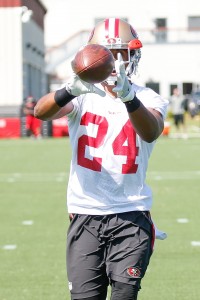 “Since joining us this offseason, K’Waun has displayed every trait and characteristic we want to see from our players,” said 49ers general manager John Lynch. “He is a tremendous competitor on the field and a true professional in our building. K’Waun has continued to get better and better every day and we wanted to ensure he would be a part of what we are building moving forward. I am really excited for both him and our team.”

Williams, 26, has only spent three games with the 49ers, as he signed with the team on a one-year, $765K deal this offseason. Serving as San Francisco’s nickel corner, Williams has played on 57.5% of the club’s defensive snaps, racking up 14 tackles and two passes defensed in the process. While he hasn’t graded well in Pro Football Focus‘ rankings — just the No. 94 cornerback among 110 qualifiers — the 49ers have apparently been pleased with Williams’ production thus far.

An undrafted free agent out of Pittsburgh, Williams appeared in 26 games for the Browns from 2014-15 before being suspended in 2016 following an “ongoing dispute” over an ankle injury. After eventually reaching the free agent market, Williams drew interest but didn’t land a contract until the season had concluded. Williams received offers from at least four clubs — including the Jets — before landing with the 49ers.

Andy Reid credited recently hired GM Brett Veach of alerting him to the likes of DeSean Jackson, LeSean McCoy and Fletcher Cox during the duo’s time together with the Eagles. The new Chiefs GM’s latest pet project was a player who figures to have a big say in whether the franchise can challenge for a Super Bowl title in the years to come. Reid said Veach was “all in on” Patrick Mahomes during the franchise’s draft preparation and brought the Texas Tech prospect onto he and then-GM John Dorsey‘s radar.

“If he brings you (a player) and he’s that sold on him, you better take a look at him,” Reid said, via Terez Paylor of the Kansas City Star. “He’s brought to me (guys) like DeSean Jackson, LeSean McCoy and Fletcher Cox — all these guys, and it was early, before anybody really had a beat on it. And (back then) … I’m going, ‘Wow, he’s got kind of a knack for this thing.”

Here’s the latest out of the Western divisions.

It’s official. The 49ers have signed free agent cornerback K’Waun Williams to a one-year deal, according to a team announcement. 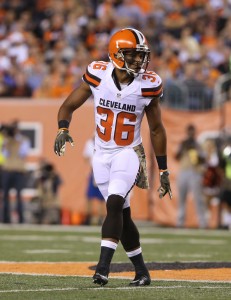 In addition to the 49ers, the Jets, Dolphins, Vikings, and Lions all expressed interest in Williams, while the Jets are known to have offered the 25-year-old a free agent pact. The Niners have landed Williams, however, and will add him to a cavalcade of cornerbacks that already includes Tramaine Brock, Jimmie Ward, Keith Reaser, Rashard Robinson, and others.

Williams, who entered the league as an undrafted free agent out of Pitt in 2014, appeared in 26 games (10 starts) with Cleveland from 2014-15. Playing mostly in the slot, Williams didn’t manage any interceptions, but did post 10 passes defensed, three forced fumbles, and two sacks during his time with the Browns.

Cleveland waived Williams in the midst of a spat regarding an ankle injury, and though he was subsequently claimed by the Bears, Williams failed his physical in Chicago and hit the free agent market once again. Williams never played in 2016, and still has an outstanding grievance against the Browns.

The pact was first reported by Ian Rapoport of NFL.com (Twitter link). Matt Maiocco of CSNBayArea.com first reported that San Francisco had offered Williams a contract.

The Jets have offered a contract to free agent cornerback K’Waun Williams, a league source tells Darryl Slater of NJ.com. The same source says that Williams also has contract offers from three other teams. Williams is expected to choose one of the offers later this week.

In addition to the Jets, Williams has also drawn interest from the Lions, 49ers, Vikings, and Dolphins. At this time, it’s not clear which of those teams have put contracts on the table. Williams, 26 this summer, could be drawn to the Jets because he grew up in Paterson, New Jersey and played at Montvale’s Saint Joseph Regional High. Ultimately, however, he’ll probably base his decision on playing time and lean towards any team willing to give him a partial guarantee on his deal.

Last summer, the slot corner was embroiled in a high-profile spat with the Browns organization. The Browns suspended Williams for “conduct detrimental to the team” when he independently decided that he could not play in the team’s first preseason game because of his ankle condition. Later, Williams had to have an operation to remove painful bone spurs and he is now pushing for the team to reimburse him for his 2016 $600K salary.

Free agent cornerback K’Waun Williams will take his visit with the Vikings next Tuesday, tweets Darren Wolfson of 1500 ESPN. Williams, 25, had meetings with the Lions and Jets earlier this week, and is expected to convene with the Dolphins and 49ers at some point, as well. After starting 10 total games during his first two years in the NFL, Williams was sidelined for all of 2016 thanks to an ankle injury.

Here’s more from Minnesota and the rest of the NFC:

K’Waun Williams has quite the free agent tour set up for himself. In addition to visits with the Lions and Jets, Williams is also slated to visit the Dolphins, 49ers, and Vikings this week, according to ESPN.com’s Michael Rothstein (on Twitter). Of course, those visits could also be 86’d if Williams immediately strikes a deal with either Detroit or New York. 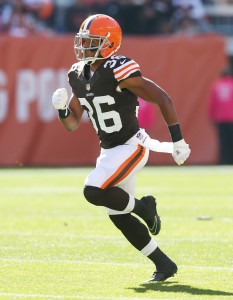 Williams arrived in Detroit on Monday and will touch down in the New York/New Jersey area on Tuesday night. If he doesn’t have a contract after wrapping up his visit with the Jets on Wednesday, he’ll continue meeting with clubs.

As a rare February free agent, Williams has a bit of added value for teams who are looking into a low-cost solution at slot cornerback. Williams’ next deal is likely to come as a one-year pact, so he is presumably looking for a situation where he can maximize his playing time and increase his value for next offseason. He probably won’t get a fully guaranteed roster spot, but he could conceivably get a small partial guarantee on his salary if enough clubs show interest.

Williams had surgery to remove bone spurs in his ankle back in November. He recently received full clearance from Dr. Robert Anderson.

Former Browns cornerback K’Waun Williams is already making the free agent rounds. As a rare February free agent, he has visits scheduled with the Lions on Monday followed by a meeting with the Jets, a source tells Ian Rapoport of NFL.com (on Twitter). Williams is also on the Saints’ radar, tweets The Advocate’s Joel A. Erickson, though he notes that other teams seem to have more interest in the defender.

Williams, who had ankle surgery in November, was recently given full clearance by Dr. Robert Anderson. In theory, the young cornerback could sign with a team right away and give a club a quality option to consider in the slot.

Last summer, Williams was embroiled in a high-profile spat with the Browns organization. The Browns suspended Williams for “conduct detrimental to the team” when he said that he independently decided that he could not play in the team’s first preseason game because of the ankle condition. Ultimately, Williams had to have an operation to remove painful bone spurs and he is now pushing for the team to reimburse him for his 2016 $600K salary. In between all of this, Williams had an agreement with the Bears that was scuttled by a failed physical.