THURSDAY, 3:40pm: The Jets have officially waived Brindza, the team announced today in a press release. Based on his injury, Brindza figures to get a failed physical designation when he shows up on the NFL’s official transactions report.

WEDNESDAY, 1:22pm: Kyle Brindza‘s first season with the Jets has ended before it could even get started. On Wednesday, Brindza announced on Instagram that he has torn his Achilles tendon. 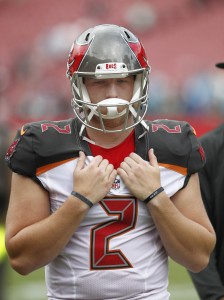 “As cliche as it sounds … a minor set back for a major come back,” he wrote. “I have worked my tail off to get another shot and I got it, but now I have to take a step back. I ruptured my Achilles completely during my kicking workout. I’m not mad. I’m not upset. Unfortunate? Yes. I know God has a plan and I have to trust it. This is just another chapter to my story. Time to get this thing fixed and start the road to recovery. . Day 1 starts today!”

Brindza, 23, signed a futures deal with the Jets just twelve days ago. The youngster began the 2015 season as the Buccaneers’ kicker, beating out veteran Connor Barth for the job. However, he struggled mightily in the role, and was waived after just four games. After missing just one of nine total kicks in his first two games, Brindza missed two extra points and converted only two of seven field goal attempts in Weeks 3 and 4.

The injury occurred last Friday during a routine workout at his local field in Michigan, as Rich Cimini of ESPN.com writes. Brindza was signed by Gang Green to compete with Nick Folk, but that particular competition is now off. It remains to be seen whether the Jets will bring in another leg to push Folk. Folk has historically been a solid kicker for the Jets but he missed the final eight games of the 2015 season with a quadriceps injury. Randy Bullock filled in for Folk in the second half of the season but he is now slated to hit the open market in March.

The Jets have signed a pair of players to reserve/futures contracts, according to Adam Schefter of ESPN.com (via Twitter). Schefter reports that linebacker Freddie Bishop has reached an agreement on a two-year deal with the Jets, who have also added kicker Kyle Brindza to their roster.

Bishop, who played his college ball at Western Michigan, has spent the last two seasons with the CFL’s Calgary Stampeders. He was one of the league’s more effective edge rushers in 2015, tying for fourth with 11 sacks. Bishop worked out for the Chargers, Steelers, Titans, Eagles, Patriots, Bears, and the Jets in December and January before agreeing to terms with New York.

As for Brindza, the 23-year-old began the 2015 season as the Buccaneers’ kicker, beating out veteran Connor Barth for the job. However, he struggled mightily in the role, and was waived after just four games. After missing just one of nine total kicks in his first two games, Brindza missed two extra points and converted only two of seven field goal attempts in Weeks 3 and 4.

Randy Bullock, who finished the season as the Jets’ kicker, is eligible for free agency and likely won’t return. For Brindza to earn a roster spot though, he’ll have to beat out Nick Folk, who ended the year on injured reserve and still has two years left on his contract. Folk’s cap number jumps to $3.34MM in 2016, which could give the inexpensive Brindza an opening to earn the job with a strong training camp.

It’s not too early for Ted Thompson and the Packers to start thinking about extending David Bakhtiari‘s contract, according to Ryan Wood of USA Today-Wisconsin. Green Bay’s starting left tackle is entering the final year of his rookie contract, and is interested in remaining with the team beyond 2016, as he tells Wood.

“I think it’s mutual,” Bakhtiari said of his interest in sticking with the Packers. “I like it here, and they like me. I have another year. So I think if they want to do it early, awesome. If not, then we have one more year to work together. So we can talk about it then. I do think it’s too early though.”

The Packers don’t foray into free agency much, but do typically lock up their own players, so it could be a matter of when, not if, the team gets something done with Bakhtiari. We saw Green Bay lock up Mike Daniels months before he was eligible for free agency, but the club sometimes lets talks go down to the wire — Randall Cobb and Bryan Bulaga signed extensions a year ago just before hitting the open market.

As we wait to see if Bakhtiari and the Packers can get anything done this offseason, let’s round up some more items from out of the NFL’s North divisions….

Buccaneers center Joe Hawley feels like he got a raw deal from his former team, the Falcons. On a conference call, D. Orlando Ledbetter of The Atlanta Journal-Constitution asked Hawley if he felt that he was given enough time coming back from the injuries to win the starting job.

“Uh, honestly, no. I think they kind of used it as an excuse,” Hawley said. “When I got here I wasn’t 100 percent yet. But they gave me a chance. Now, I’m feeling like the knee is back to new. But it just took four or five more weeks that I thought it would. Yeah, I think they kind of cut me short of that.”

4:21pm: Coach Todd Bowles told reporters that Folk is expected to be sidelined for 4-6 weeks (via Brian Costello of the New York Post on Twitter).

3:49pm: With Nick Folk expected to be sidelined for Thursday’s game against the Bills due to a quad injury, the Jets brought in four kickers to work out for them today, tweets Mike Garafolo of FOX Sports.

Connor Hughes of the Journal Inquirer tweeted earlier today that Billy Cundiff was among that group of free agent kickers getting a look from the Jets, and Brian Costello of the New York Post fills out the rest of the list, tweeting that Randy Bullock, Garrett Hartley, and Kyle Brindza also auditioned. In Garafolo’s view, Bullock is the favorite to sign with New York to replace Folk.

As for how long Bullock – or another new kicker – would stick with the team, Costello (Twitter link) hears from a source that Folk is expected to be sidelined for at least four weeks due to his leg injury. If that’s the case, it appears IR would be a possibility for him, since the club may be hesitant to carry multiple kickers on its roster for upwards of a month.

Three of the four kickers who tried out for the Jets today spent time with another team this season, with Bullock losing the job in Houston, Brindza being replaced in Tampa Bay, and Cundiff briefly handling kickoffs in Buffalo. Hartley last served as the Browns’ kicker to close out the 2014 campaign.

The Giants are working out a handful of kickers today, including Kyle Brindza, Zach Hocker, Corey Acosta, and Tom Obarski, according to Mike Garafolo of FOX Sports (Twitter link). Josh Brown has been a little inconsistent on kickoffs, putting one out of bounds on Sunday, but it’s hard to imagine the team making a change, considering he’s perfect on field goals and has missed just one extra point. As Jordan Raanan of NJ.com tweets, the Giants are likely just kicking the tires on free agents.

10:57am: The Saints will be signing Forbath to replace Hocker, according to Mike Garafolo of Fox Sports (Twitter link).

Forbath, 28, made 94.4% of his field goals (17 of 18) in his first season with Washington back in 2012, and while he never matched that accuracy mark in subsequent years, his career percentage remains a solid 87.0%.

Forbath was cut after Week 1 this season by Washington, but has worked out for several teams since then. He was said to be the second choice for both the Eagles, who signed Caleb Sturgis, and the Texans, who signed Nick Novak, so it seemed like it would just be a matter of time before he found a new home.

10:51am: The Saints are cutting ties with Zach Hocker, and will seemingly have a new kicker in place for their next game, according to Jason La Canfora of CBSSports.com (via Twitter). Because he’s a rookie, Hocker will have to clear waivers before he officially becomes a free agent.

Hocker, a seventh-round pick in the 2014 draft, earned his first starting job this year in New Orleans. However, he was a little shaky during his first six games as the team’s kicker. Hocker missed four of his 13 field goal tries, including three from less than 50 yards, and failed to convert one of his extra-point attempts as well. The 24-year-old’s two field goal misses during last Thursday’s win over the Falcons appear to have sealed his fate.

Earlier this month, New Orleans auditioned a handful of free agent kickers, though the team elected to stick with Hocker at that point. Randy Bullock, Kai Forbath, and Kyle Brindza all got looks from the Saints at that time, and all three remain free agents, so I’d expect them to be among the first players considered by the club now that Hocker is no longer in the mix.

The Saints won’t displace Zach Hocker right now, even after auditioning several kickers, as Mike Garafolo of FOX Sports tweets. Hocker missed a potential game-winning field goal on Sunday night against the Cowboys before New Orleans won in overtime, and missed a field goal and an extra point in the team’s Week 2 loss to Tampa Bay. However, he’ll get at least one more opportunity to hang onto the job going forward.

In yesterday’s workout for the Saints, Randy Bullock hit all of his field goal attempts, while Kai Forbath missed a 53-yarder but made up for it with a 55-yard make, per Garafolo. Kyle Brindza, recently released by the Bucs, also got a look from the Saints, Field Yates of ESPN.com tweets.

11:26am: The Buccaneers have officially cut Brindza, the team announced in a press release.

11:09am: The Buccaneers have decided to part ways with kicker Kyle Brindza after he missed three more attempts yesterday, according to Rick Stroud of the Tampa Bay Times (Twitter links). Stroud reports that the club met with Brindza this morning to inform him of the decision.

Brindza, who beat out Connor Barth for the Buccaneers’ kicking job a month ago, struggled mightily over the last couple weeks. After making all four of his extra point attempts and four of five field goals in his first two games, Brindza missed two extra points and converted only two of seven field goal attempts in Weeks 3 and 4.

The Bucs will hold kicker auditions tomorrow, tweets Mike Garafolo of FOX Sports, suggesting the team has yet to decide on Brindza’s replacement. Barth remains available, and there are several other veteran free agents available, including Kai Forbath, who was reportedly the runner-up when the Texans and Eagles signed new kickers last week.