Perry’s interesting post-draft NFL journey continues. Initially slated to join the Eagles as a UDFA, he ended up signing with the Jaguars days later. Then, in July, he was waived (with an injury designation) to make room for Sloter’s addition. Perry has obviously recovered, as the two have now swapped placed once more.

Fenton was one of four Chiefs placed on the PUP list at the start of training camp. That came as little surprise at the time, but his return to practice will be a welcomed sight in Kansas City’s secondary. NFL Network’s James Palmer tweets that Fenton’s preseason availability remains a question mark, but that he is still expected to be fully recovered in time for the regular season.

Jackson was a fifth-round pick in this year’s draft at a position which has been in flux throughout the offseason in New Orleans. The 24-year-old had a highly productive final season in particular at Appalachian State, posting 119 tackles, 20 TFLs and six sacks. He will now have to wait until 2023 to carve out a depth role in the middle of the Saints’ defense.

EJ Perry isn’t going to Philly after all. On Tuesday, the former Brown quarterback agreed to sign with the Jaguars after initial reports had him ticketed for the Eagles (Twitter link via Adam Schefter of ESPN.com). 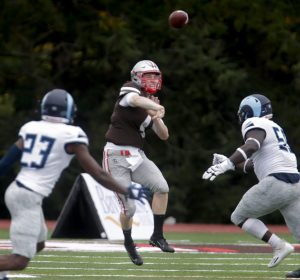 The Eagles were believed to have two notable undrafted free agent quarterbacks in Perry and ex-Nevada signal caller Carson Strong. While Strong received a larger-than-average $320K guarantee for his weekend deal, other teams still had interest in Perry.

Perry — who started out at Boston College — was named the Ivy League Player of the Year in 2021 after throwing for 3,033 yards and 23 touchdowns in just ten games. He also showed dual-threat potential, tacking on 402 rushing yards and seven TDs via the ground.

It’s not clear if Perry has a better path to the 53-man roster in Jacksonville. The Jaguars already have former No. 1 overall pick Trevor Lawrence under center with C.J. Beathard and Jake Luton in reserve.

The Eagles, meanwhile, have some new options to consider beyond starter Jalen Hurts. If GM Howie Roseman elects to trade Gardner Minshew, Strong and Reid Sinnett could vie for the QB2 spot.

The Eagles will go into the 2022 season with Jalen Hurts under center, and perhaps Hurts will prove, in his second full season as the starting quarterback, that he is the club’s long-term answer at the position. But Philadelphia has added two intriguing UDFA passers to the QB room just the same. 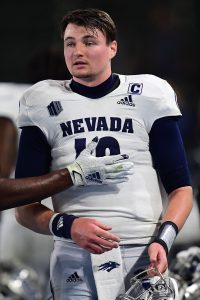 Per Doug Kyed of Pro Football Focus, the Eagles are not only signing former Nevada quarterback Carson Strong, they are furnishing him with a massive (for a UDFA, anyway) $320K guarantee (Twitter link). GM Howie Roseman doubled down on undrafted signal-callers, signing former Boston College and Brown QB EJ Perry as well.

Strong, who elected to forego his senior season and enter the 2022 draft — possibly motivated by a weak collegiate class of quarterbacks — was not among the draft’s 262 selections. That is despite a tremendous run for the Wolfpack that saw him complete over 70% of his passes in the 2020 and 2021 seasons and earn Mountain West Offensive Player of the Year honors in both years. During that time, he threw for 63 touchdowns against just 12 interceptions, and his combination of arm strength and touch has been praised by scouts.

The concern with Strong is his medical chart. As Jeff Kerr of CBS Sports writes, Strong suffers from osteochondritis dissecans, a knee condition that includes cartilage problems. Strong has had multiple surgeries on the knee, so that will need to be monitored throughout his professional career, and it is expected to limit his mobility in a big way.

Still, from a pure talent perspective, the Eagles will have a great deal to work with as they attempt to develop Strong. The 6-4, 226-pounder is currently projected to compete with Reid Sinnett for the No. 3 spot on the depth chart, but he could be bumped up the pecking order if he shows promise and if Philadelphia elects to trade current QB2 Gardner Minshew. With Hurts’ future still somewhat uncertain, and with Minshew’s contract expiring at the end of the 2022 season, it’s easy to see why Strong elected to sign with the Eagles.

Perry, meanwhile, will likely be fighting for a practice squad spot unless there is a trade or injury. He earned Ivy League Player of the Year acclaim in 2021 after throwing for 3,033 yards and 23 TDs in just 10 games and adding another 402 yards and seven scores on the ground, showcasing his dual-threat capabilities.