The Chiefs have released wide receiver Mike Williams and safety Stevie Brown, according to Terez A. Paylor of the Kansas City Star (Twitter links).

Kansas City was the third NFL employer for the 29-year-old Williams, who signed with the club in April. He entered the league with the Buccaneers as a fourth-rounder from Syracuse in 2010. After four years in Tampa Bay, which signed him to a long-term deal in 2013 before quickly moving on over off-the-field issues, Williams joined his hometown Bills for a short-lived run in 2014.

Williams, who sat out last season, has accrued 223 receptions and 26 touchdowns in 63 career games (52 starts). The 6-foot-2, 204-pounder racked up 60-plus catches and between 771 and 996 yards in each of his first three seasons, but he has since combined for just 30 receptions.

Brown, like Williams, was out of football in 2015 despite experiencing past success. A seventh-round pick of the Raiders in 2010, Brown posted a career year in 2012 as a member of the Giants, with whom he intercepted eight passes. However, he failed to register a pick in each of his other three seasons – one apiece with the Giants, Raiders and Colts. Brown signed with the Chiefs in early April, and he clearly didn’t do enough during his short stint with the club to merit a roster spot.

Despite the respective departures of Williams and Brown, the Chiefs still have no shortage of wideouts and safeties battling for jobs, as Roster Resource shows.

4:45pm: The Chiefs announced that the deal is now official.

3:24pm: The Chiefs are adding a free agent to their wide receiving corps today, according to Ian Rapoport of NFL.com, who reports (via Twitter) that former Buccaneers and Bills wideout Mike Williams is signing a one-year deal in Kansas City.

Williams, a fourth-round pick out of Syracuse in 2010, got off to a great start in Tampa Bay, racking up 964 yards and 11 touchdowns on 65 receptions in his rookie season for the Buccaneers. Although he was productive for the next two seasons, earning a lucrative, long-term extension in July 2013, Williams’ time in Tampa Bay came to an abrupt end shortly after he signed that contract, in large part due to a multitude of off-the-field issues.

Williams signed with the Bills for the 2014 season, but was cut by Buffalo after catching just eight balls for 142 yards and a touchdown in nine games. The 28-year-old (29 next month) was unable to catch on with an NFL team for the 2015 campaign, serving a three-game suspension to open the season. So he may face an uphill battle as he attempts to secure a spot on the Chiefs’ 53-man roster in 2016.

Terms of Williams’ new contract aren’t yet known, but a minimum salary deal seems very likely. The veteran receiver worked out for the Bengals and Patriots this offseason before agreeing to sign with the Chiefs. 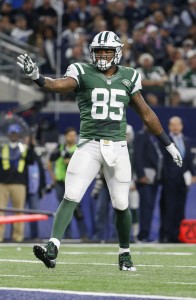 Veteran linebacker Brandon Spikes has been suspended for the first four games of the 2015 regular season, according to Field Yates of ESPN.com (Twitter link). This news won’t hurt a particular team, since Spikes is currently a free agent, having been cut by the Patriots earlier in the year.

Spikes is serving a year of probation after pleading guilty in a hit-and-run crash. Police determined that the 28-year-old was speeding and driving negligently when he crashed his Maybach sedan into an SUV back in June. After the crash, Spikes fled the scene, a crime which calls for up to two years in jail. However, the free agent linebacker was able to avoid prison time due to the minor nature of the injuries to the three people in the crash.

Spikes wasn’t the only free agent who received a suspension from the NFL. The following players have also been suspended, according to Yates (Twitter link):

Former agent Joel Corry tells Bob Condotta of the Seattle Times that he can envision the Seahawks and Russell Wilson‘s camp coming to a creative compromise on a contract extension. A good halfway point for the two sides could be a deal that comes in at significantly less money than a top quarterback would receive, but with that money fully guaranteed. Corry throws out the idea of a possible five-year contract that would guarantee Wilson something like $75-$80MM.

According to multiple reports (all four Twitter links), Eagles safety Nate Allen was detained, questioned, and released following an accusation of indecent exposure. Allen is adamant that the accusation was false, and says he has asked police to keep investigating in the hopes of finding video that clears him, tweets Les Bowen of the Philadelphia Daily News. Assuming the accusation levied against the defensive back, who is eligible for free agency next month, was indeed false (as it seems to be), it could highlight potential problems with the league’s new personal conduct policy, as Mike Florio of Pro Football Talk explains.

The Bills have released wide receiver Mike Williams, who is now healthy after suffering a calf injury earlier this season, reports Adam Schefter of ESPN (via Twitter).

The team released him earlier this season, but he cleared waivers and reverted to the team’s injured reserve list.

Williams’ has had a tumultuous year since joining the Bills via trade this offseason. Unhappy with his opportunity, he reportedly asked for a trade and the organization allowed him to pursue interested team. For the record, Williams denied at the time that he asked for a trade.

Williams is now free to sign with any team, granted someone would want him for the final week of the season. It is unlikely that any playoff team would be so desperate for receiver help that they would sign him for a postseason run. Teams already eliminated from playoff contention would also have little to gain from bringing him in, with no previous knowledge of the offense and an unlikelihood of getting on the field with one week left in the season.

It would be more likely that if he were given an opportunity to continue his career, it would happen in free agency this offseason.

TUESDAY, 9:56pm: Williams has cleared waivers and reverted to the Bills’ injured reserve list, writes Rodak, who estimates that the club reach a settlement with the receiver.

MONDAY, 3:17pm: Williams wants to play now and is hoping to catch on with a contender, according to Adam Schefter of ESPN.com (via Twitter). Wawrow’s previously-linked report indicates that the Bills reached a settlement with Williams, so it sounds as if he’ll hit the open market rather than landing on the team’s injured reserve list.

3:04pm: A little more than eight months after they acquired him from the Buccaneers in exchange for a sixth-round pick, the Bills are parting ways with veteran wideout Mike Williams, according to reports from John Wawrow of The Associated Press and Mike Rodak of ESPN.com (Twitter links).

Williams, 27, was expected to contribute this season to a revamped Bills receiving corps that lost Steve Johnson, but added No. 4 overall pick Sammy Watkins. However, Williams didn’t see much action during his stint in Buffalo, partly due to injuries, and compiled just 142 yards and one touchdowns on eight receptions in 2014. There were reports earlier in the season that Williams – or his agent – had requested a trade, but the former Buccaneer denied asking to be moved.

As Rodak indicates, Buffalo is waiving Williams with the injured designation, which means he should revert to the injured reserve list, assuming he goes unclaimed tomorrow on waivers. The team’s official press release on the move confirms as much, noting that Williams has been put on the waived/injured list.

To replace Williams on the roster, the Bills have signed wide receiver Deonte Thompson from off the Ravens’ practice squad, as first reported by Aaron Wilson of the Baltimore Sun.