One of Tom Brady‘s Patriots blockers is set to fill one of the Buccaneers’ open spots at guard. The Pats are trading Shaq Mason to the Bucs, Mike Garafolo and Ian Rapoport of NFL.com report (via Twitter).

Two years remain on Mason’s contract, which contains base salaries of just $6.5MM and $7.5MM. Mason has been with New England throughout his career; he was a starter on the final three Pats teams Brady piloted to the Super Bowl.

The compensation is similar to the Bucs-Pats’ Rob Gronkowski transaction two years ago. Tampa Bay sent a fourth to New England for Gronk, reuniting him with Brady. After a retirement that did not even last two months, Brady’s return appears to have keyed some aggressive Bucs maneuvers. Ryan Jensen is back at center, and the team is re-signing top cornerback Carlton Davis. It should be expected Gronk will return as well.

Tampa Bay has seen its guard tandem of the past four years — Ali Marpet–Alex Cappa — splinter, with Marpet retiring and Cappa committing to the Bengals. Mason has been regarded as one of the league’s better guards, making this compensation appear rather light given the low salaries tied to his deal.

A fourth-round pick in 2015, Mason moved into the Patriots’ starting lineup quickly. He started 98 games for the Pats over the past seven seasons. Mason signed a five-year, $45MM extension with the Pats in 2018. Given where the guard market has gone, that deal looks team-friendly now. It would not surprise if the Bucs addressed the contract at some point. This will be Mason’s age-29 season; his age-28 campaign ended with Pro Football Focus grading him fourth overall among guards.

The Pats have now seen their longtime Mason-Joe Thuney guard duo disband, with Thuney defecting to the Chiefs in March 2021. The two played together for five seasons. New England will create just more than $7MM in cap space by trading Mason. Trent Brown, New England’s right tackle in 2021, is also unattached presently. Michael Onwenu would make sense as a starter in 2022, given the departures of Mason and Ted Karras (Bengals). But the Pats have work to do up front.

Trent Brown has not played since Week 1 due to a calf injury. The Patriots’ right tackle starter is now guaranteed to miss at least three more games; the team placed Brown on IR Saturday, Field Yates of ESPN.com tweets.

Since his first stint with the Patriots ended, Brown has been unable to stay healthy. He did make the 2019 Pro Bowl, becoming the rare right tackle invitee that year, but played in just 11 games. Last year, a calf injury in Week 1 sidelined him before multiple stints on the Raiders’ reserve/COVID-19 list wrecked his season.

The Patriots reacquired Brown for a Day 3 pick but have not been able to deploy him much. As part of a redone contract, Brown is only signed through the end of this season. The 6-foot-8 blocker’s value has taken a major hit since the Raiders gave him a four-year, $66MM deal early in free agency two years ago.

In addition to Brown’s extended absence, the Patriots are set to be without three other offensive line starters against the Texans. Left tackle Isaiah Wynn and guards Shaq Mason and Michael Onwenu are out. Mason is injured but not on IR; Wynn and Onwenu are on the team’s coronavirus list. This will leave center David Andrews as New England’s lone first-string O-lineman available Sunday in Houston.

Just as the Patriots took their two highest-profile players off the reserve/COVID-19 list, they placed three more players on it. Sony Michel, Shaq Mason and Derek Rivers landed on the list Saturday, per Field Yates of ESPN.com (on Twitter).

Michel has tested positive, Jeff Howe of The Athletic reports (on Twitter). Mason and Rivers have not. Although Michel was on New England’s IR list, this is certainly a situation to monitor for the league. The NFL moved the Patriots’ Week 4 game to Monday after Cam Newton‘s positive test surfaced the previous Saturday and postponed the Denver-New England Week 5 game to the following Monday and then, after another Pats positive test emerged Sunday morning, delayed it another week.

Players do not have to test positive for the coronavirus to be placed on teams’ COVID lists; they can land on there if they are deemed close contacts of someone who has tested positive. The Pats took Newton and Stephon Gilmore off their list this week but still have multiple players on it. James Ferentz and defensive end Byron Cowart were already on New England’s COVID list.

Approaching 4pm CT Saturday, the Pats’ Week 6 game against the Broncos remains scheduled for noon Sunday. The NFL was aware of the team’s impending Saturday adjustment to its COVID list, per Tom Pelissero of NFL.com (on Twitter). However, the Pats did not resume practice until Thursday — after their game against the Broncos was moved off its Monday date — and canceled their in-person workouts Friday because of another positive test.

Michel has been on New England’s IR list since before their Week 4 game against the Chiefs; Mason missed Week 4 and was questionable for Week 6. The Pats will be down Mason and Ferentz from their starting O-line on Sunday, should the game remain scheduled. Rivers has played 21% of the Patriots’ defensive snaps this season; the defensive end has 1.5 sacks.

The Patriots have converted $1.75MM of guard Shaq Mason’s base salary into a signing bonus, as Field Yates of ESPN.com tweets. The move will create an extra $1.4MM in cap room for New England, giving them the space required to add wide receiver Mohamed Sanu to the payroll.

Before the 2018 season, Mason inked a new five-year deal with $45MM in new money. That pact included a $12MM signing bonus, $5MM in incentives, and roughly $30MM in the first three years. Now, he’s made a simple adjustment on his contract to help bring Sanu into the fold.

Sanu didn’t come cheap for the Pats, but he’ll give Tom Brady another major weapon to help replace Josh Gordon. The Pats placed Gordon on IR on Wednesday with the belief that he will not be able to suit up again this year. Gordon, meanwhile, believes that he will be able to play again, so it’s a situation to monitor.

In other Pats news: the Patriots changed their minds about releasing tight end Eric Tomlinson. Tomlinson has not been released, the Pats say, so he may have a chance to build off of the season-high 38 snaps he logged against the Jets on Monday.

We have already learned a fair amount about the details of Odell Beckham Jr.‘s new mega-deal with the Giants, but Ralph Vacchiano of SNY.tv passes along some important information about OBJ’s cap hits. While his contract will provide New York with $3MM of cap relief in 2018, Beckham’s cap number balloons to $21MM in 2019 and will be between $15MM and $19.75MM from 2020 to 2023.

In 2019, then, the Giants could be devoting half of their cap space to just five players, and they are projected to have just $12MM in cap room in 2019 at the moment. That number will increase with several easy cuts and restructures, but Beckham’s contract will force the club to make a few difficult decisions, which Vacchiano explores in greater detail.

Now let’s take a look at a few more notes on recently-signed contracts: 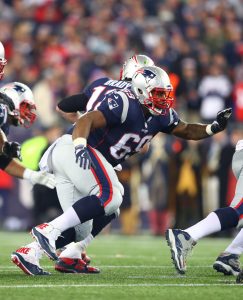 Some key names appear on the Patriots‘ 2019 prospective UFA list. Among them are Trey Flowers, Chris Hogan, Malcom Brown and now Danny Shelton. But a mainstay on the offensive line is entering his Pats walk year as well, and given what’s happened to the guard market the past two Marches, Shaq Mason can expect to see a number of offers if he reaches the market. However, the fourth-year guard would prefer to stay in New England, Kevin Duffy of the Boston Herald notes. If an extension isn’t reached this offseason, Duffy recalls the Pats’ past Nate Solder and Marcus Cannon re-ups, Cannon’s most recent one having occurred in November 2016.

A 2015 fourth-round pick, Mason is only entering his age-25 season. The Pats have traded away key players in recent years and let others, like Solder, walk in free agency. But Mason (No. 9 among guards last season, per Pro Football Focus) might be a cornerstone talent the team will want protecting Tom Brady‘s to-be-determined successor rather than joining Chandler Jones, Jamie Collins, Dion Lewis or Malcolm Butler among Patriots discoveries deemed non-essential to the future. It would almost certainly cost the Patriots eight figures per year to retain Mason, but Solder being off the books opens up a high-salary offensive line spot on the Pats’ payroll.

Here’s the latest out of the AFC East: