The Eagles have signed cornerback Steven Nelson to a one-year deal, per a club announcement. Nelson’s one-year deal will furnish him with $2.5MM in base salary with the chance to make up to $4.125MM with incentives (Twitter link via NFL.com’s Ian Rapoport). To make room on the roster, the Eagles have released defensive tackle William Henry.

The Steelers released Nelson way back on March 23rd. Ever since, he’s been fielding interest from roughly half the league. Fourteen different teams reportedly reached out to him, including the Texans, Bears, Bengals, and Bills. Ultimately, the Eagles came away with the veteran.

Nelson was originally drafted by the Chiefs in the third-round in 2015. After a four-interception 2018 season for Kansas City, he signed a three-year, $25.5MM pact with Pittsburgh. He’s started 30 games for the Steelers over the last two seasons. And, in 2020, he notched nine passes defended and two interceptions.

Nelson has been a solid starter, and has received strong marks from Pro Football Focus. In fact over the last two years, PFF has him graded as the NFL’s 11th-best cornerback. Now, the 28-year-old will look to boost the Birds’ secondary, likely starting opposite of Darius Slay. The duo will be supported by rookie Zech McPhearson with slot support from natural nickel Avonte Maddox.

One of the top free agents left on the market is cornerback Steven Nelson. The Steelers released Nelson back on March 23rd, and he’s remained unsigned ever since.

That being said, it sounds like he’s unsigned still by choice, not because of lack of interest. Nelson’s “market has been strong,” and he’s received interest from 14 teams including the Texans, Bears, Eagles, Bengals, and Bills, a source told Jeremy Fowler of ESPN.com (Twitter link).

Fowler adds that Nelson is choosing to be “patient waiting for right fit and opportunity.” Nelson was originally drafted by the Chiefs in the third-round in 2015. After a 2018 season where he had four interceptions for Kansas City, he signed a three-year, $25.5MM pact with the Steelers. He then started 30 games for Pittsburgh over the last two seasons, and had nine passes defended and two interceptions in 2020.

Nelson has been a solid starter, and has received strong marks from Pro Football Focus. In fact over the last two years, PFF has him graded as the NFL’s 11th-best cornerback. He could be a boost to plenty of teams in need of help in the secondary, and will likely get some significant money from somebody.

As free agency neared, the Steelers had one of the league’s worst cap situations. One of their starters may have tried to add a mutually beneficial wrinkle to the team’s cap sheet.

Steven Nelson believed he had outplayed the three-year, $25.5MM contract the Steelers gave him in 2019. The veteran cornerback sought an extension that would bring his 2021 cap number down while adding some guarantees and a pay raise, but the Steelers disagreed, Nelson said during a Sirius XM Radio interview with Pat Kirwan and Jim Miller (Twitter link). This led to the Steelers giving Nelson permission to seek a trade, a process that quickly gave way to the team releasing its two-year starting corner.

Prior to the release, Nelson said the Steelers did not offer him the option of a pay cut (Twitter link via The Athletic’s Mark Kaboly). One year remained on Nelson’s previous deal, which called for him to earn $8.25MM in 2021. It would have been a strange development for Nelson to accept a pay reduction, given that he sought an extension that would bump his salary. But it will be difficult for Nelson, at this juncture, to match the salary he would have earned as a Steeler next season.

The former third-round pick said 10 to 15 teams have “serious interest” (Twitter link). While that seems high given the current marketplace, the 28-year-old defender figures to have an opportunity to be a starter elsewhere in 2021. Nelson joins Richard Sherman, Casey Hayward, A.J. Bouye and Dre Kirkpatrick as veteran corners available. Nelson has experience both outside and in the slot, having played in the latter role for a bit with the Chiefs. The six-year veteran graded as a top-40 corner, per Pro Football Focus, in each of his two Pittsburgh seasons.

Apparently there wasn’t much trade interest in Steven Nelson. The Steelers have released the veteran cornerback, the team announced on Tuesday.

We heard last Friday that Pittsburgh had given Nelson permission to seek a trade, but nothing materialized. The move came less than an hour after Nelson tweeted his displeasure with the process, asking the team not to hold him “hostage.” Nelson was due a reasonable base salary of $8.25MM, but was set to count for $14.4MM against the Steelers’ cap. A third-round pick of the Chiefs in 2015, he spent his first four years in Kansas City.

His work there landed him a three-year, $25.5MM deal from the Steelers in March of 2019. He started 30 games for Pittsburgh over the last two seasons, racking up 17 passes defended and three interceptions, and received strong marks from Pro Football Focus. Over the last two years, PFF has him graded as the NFL’s 11th-best cornerback.

Nelson just turned 28 in January, and should have plenty of suitors on the open market. The Steelers have now cut Nelson, let Mike Hilton walk in free agency, and have Joe Haden turning 32 next month. They’ve got a lot of planning to do for their secondary of the future.

The Steelers have granted Steven Nelson permission to seek a trade, according to a source who spoke with ESPN.com’s Adam Schefter (on Twitter). Nelson, 28, has been starting for the Steelers for the last two years.

Nelson isn’t a household name, but the advanced metrics have been fond of his work. Between the last two years combined, Pro Football Focus has him tied as the eleventh-best cornerback in the NFL. Meanwhile, the last year of his three-year, $22.5MM deal is set to count for $14.4MM on the Steelers’ cap. It stands to reason that Nelson would draw trade interest, given his reasonable his base salary of $8.25MM. Still, there are other quality cornerbacks available on the open market, including All-Pro Kyle Fuller.

After watching Mike Hilton leave for the Bengals, the Steelers re-upped corner Cameron Sutton on a two-year deal. Without Nelson, the Steelers’ CB group would be headlined Joe Haden, Sutton, and 2019 third-round pick Justin Layne, who hasn’t seen much playing time.

It looks like Jaguars owner Shad Khan was mistaken. Khan, who has seemingly been overly optimistic about the Jalen Ramsey situation ever since his trade demand became public, said earlier this week that he expected Ramsey to play in Week 6. That was apparently news to Ramsey, and his camp soon put out word that he hadn’t committed to playing this week. Indeed, it “would be a major surprise if he plays this week,” tweets Ian Rapoport of NFL Network.

Ramsey was limited in practice all week, which is obviously a step in the right direction considering he hadn’t practiced until then since his back injury popped up. All indications are that Ramsey hasn’t wavered from his trade demand, although Khan continues to act like nothing is wrong. The Jaguars owner has also said he intends to give the Florida State product a record-breaking extension. Jacksonville has a tough game against the Saints on Sunday, and it looks like Gardner Minshew will be leading them into the game shorthanded.

Not usually big spenders in free agency, the Steelers are authorizing a mid-level deal to help their secondary. Pittsburgh agreed to terms with Steven Nelson, Ian Rapoport of NFL.com tweets. 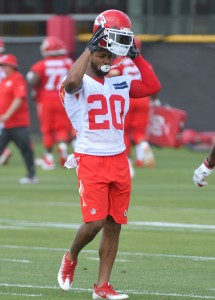 The four-year Chiefs cornerback will receive a three-year, $25.5MM pact. Nelson figures to be in line to make a strong run at the starting corner job opposite Joe Haden. While this is not a high-end cornerback contract, it is one of the biggest free agent deals the continuity-centric Steelers have ever finalized.

The Steelers’ Artie Burns pick has not gone as the franchise had hoped, with the 2016 first-round selection having been benched last season. Nelson had a much busier season, being picked on often. But the 2015 third-round pick intercepted four passes — the first four of his career — and was a constant in the Chiefs’ secondary.

Nelson, 26, did not play much as a rookie but emerged as Kansas City’s slot defender in 2016. After an injury-delayed 2017, Nelson moved outside and worked in that role last season. Pro Football Focus graded Nelson as the No. 33 corner last year.

He will join Haden in comprising a free agent tandem at corner for the draft-and-develop organization, with undrafted free agent Mike Hilton likely to continue to work in the slot. Haden has one season remaining on his three-year, $27MM contract.