The Packers are making a change on special teams. They are firing ST coordinator Shawn Mennenga, according to Tom Pelissero of NFL.com (on Twitter). A longtime college coach, Mennenga had previously served as Browns assistant ST coach before joining Matt LaFleur‘s staff in 2019. The Packers are expected to promote assistant ST coach Maurice Drayton to replace Mennenga, Pelissero tweets. At least one other team was interested in Drayton for such a role, according to Tom Silverstein of the Milwaukee Journal Sentinel. Drayton was in contention for this job two years ago.

Here is the latest out of Green Bay and from around the league: 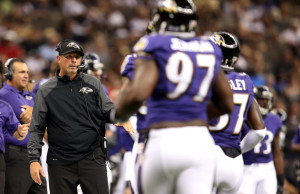 Head coach Dirk Koetter & Co. fired ex-defensive line coach Jay Hayes last week, and Monachino is the first known candidate to take over the job. At present, it’s unclear whether Monachino was offered the role following his interview, or if Tampa Bay plans to interview more contenders before making a decision, per Stroud.

Monachino, 51, had been Indianapolis’ defensive play-caller for the past two seasons, but wasn’t retained when the Colts hired a new coaching staff. Indy finished as a bottom-six defense in DVOA during both of Monachino’s years at the helm, but given the Colts’ lack of talent on the defensive side of the ball, blame can’t be laid solely at Monachino’s feet. A longtime NFL and collegiate coach, Monachino has also spent time with the Jaguars and Ravens.

Tampa Bay’s defensive line was even worse than Indianapolis’ in 2017, as the Bucs finished dead last in both sacks and adjusted sack rate. As such, adding extra pass rushers figures to be one of Tampa’s top priorities this offseason.

4:37pm: The Colts have officially confirmed their hiring of Monachino as the team’s new defensive coordinator.

1:24pm: Ravens head coach John Harbaugh scooped reporters and the Colts on some coaching news out of Indianapolis today, telling the media that Baltimore linebackers coach Ted Monachino is joining the Colts as the team’s defensive coordinator, according to Jeff Zrebiec of the Baltimore Sun (Twitter link).

The Colts’ search for a new defensive coordinator didn’t take long — less than 48 hours have passed since word broke that the team had decided to part ways with Greg Manusky. Manusky had joined the Colts’ staff in 2012, around the same time Chuck Pagano was hired. However, unlike Pagano, Indianapolis’ former defensive coordinator didn’t receive a new contract this week.

Monachino will be tasked with turning around a Colts defense that finished 27th in the NFL in total yards per game (379.1) and 25th in points per game allowed (25.5) in 2015. Indianapolis’ notable free agent signings a year ago included front-seven players Trent Cole and Kendall Langford, but they didn’t contribute much to improving the defense’s performance – despite a career-high seven sacks from Langford – so we’ll see what direction Ryan Grigson goes this time around. The Colts will have a top-20 draft pick this year — perhaps that first-rounder will be used on a defensive playmaker.

Alex Marvez of FOX Sports first reported that Monachino, who has some history with Pagano in Baltimore, would be a strong candidate for the Colts’ DC job. Before joining the Ravens as their linebackers coach in 2010, Monachino served as the defensive line coach in Jacksonville for several years.

With six NFL teams currently in the market for a head coach, the future of Sean Payton has been one of the biggest questions marks around the league this week. We may soon have an answer on what 2016 has in store for the Saints head coach, though perhaps not as soon as initially expected. According to Evan Woodbery of the New Orleans Times-Picayune (Twitter link), Payton’s Wednesday afternoon press conference has been postponed by an hour, to 2:00pm CT.

Ian Rapoport of NFL.com tweets that the Saints are hoping GM Mickey Loomis can convince the longtime head coach to remain in New Orleans. However, if Payton decides he wants to pursue another job, the Saints will shift their focus to playing interested teams off one another in order to drive up his price, per Rapoport.

As we wait on Payton’s presser, let’s round up several more coaching-related notes…