Wide receiver Devin Gray will dip his toes into the NFL waters for the third time after signing a one-year deal with Kansas City, according to Ian Rapoport of NFL Network. The former Cincinnati Bearcat most recently played in the United States Football League and is the latest player from that league to sign an NFL contract.

Gray signed with the Falcons as an undrafted free agent in 2018. He spent three years on the team’s practice squad before finally being elevated to the active roster in the last regular season game of the 2020 season, still failing to find his way onto the field in that game. After participating in the short-lived The Spring League, Gray joined the Ravens for the summer of 2021, getting released from the practice squad early into the regular season. After failing to find another NFL job, Gray got selected in the USFL Draft and played eight games for the Philadelphia Stars, catching 25 passes for 210 yards and two touchdowns.

Gray has some work ahead of him to make the Chiefs’ final 53-man roster. While Kansas City’s receiving corps isn’t exactly top-heavy, it has a decent amount of potential depth. The starting three are expected to be free agent addition JuJu Smith-Schuster, Mecole Hardman, and another free agent signing in Marquez Valdes-Scantling. Behind them veteran Josh Gordon provides his skill set as long as he can stay on the field, second-round pick Skyy Moore will make the jump from Western Michigan to the NFL, and Justin Watson comes over after four unproductive years in Tampa Bay. Still behind them is former first-round pick Corey Coleman and a few other receivers who stood out in college like Daurice Fountain, Cornell Powell, and Gary Jennings.

That’s a lot of traffic for Gray to maneuver, and it will certainly be an uphill battle for the 27-year-old as he attempts to make an active NFL roster for only the second time in his career.

The Canadian Football League hovers on the verge of a canceled season, but an unusual proposition has surfaced that would potentially open the door to the CFL playing games in 2020.

Brian Woods, CEO of an American-based developmental league known as The Spring League, reached out to CFL commissioner Randy Ambrosie about a partnership to form a 14-team alliance that would hold games during fall weekdays, according to Dan Ralph of the Canadian Broadcasting Corporation. Ambrosie asked Woods for a proposal to take to the CFL’s board of governors, Ralph adds.

The COVID-19 pandemic has threatened to cancel the CFL season. Ambrosie said recently September is a best-case scenario for the league starting what would be an abbreviated season. He asked the Canadian government for financial assistance, per Ralph.

It does not appear CFL teams would play full 18-game schedules if a partnership with The Spring League happens, but the league combining with an American developmental league would be one of the more interesting developments in recent football memory. The Spring League is seeking to align with the CFL this year to play games Tuesdays, Wednesdays and Thursdays this September, Ralph reports.

In operation since 2017, The Spring League consists of four teams — which would be upped to five to match up with the CFL’s nine — that plays a handful of games per year in March and April. The CFL has previously signed players who have played in The Spring League, which has also seen the likes of Johnny Manziel, Ahmad Bradshaw, Zach Mettenberger and Greg Hardy suit up since its inception. The league has already played games this year — in Las Vegas — and defeated the Japanese national team in an exhibition game held in March in Frisco, Texas.

Additionally, a CFL-Spring League union would be open to college players — should the coronavirus impact the 2020 college season. The games would take place in the United States. Memphis, Birmingham, San Antonio, Atlanta, Dallas, and Nashville are on the list for potential host cities, Ralph notes. Interestingly, this plan would use both American and Canadian football rules, depending on the teams involved in certain games.

Former Browns quarterback Johnny Manziel has agreed to play in the 2018 Spring League, the league announced today. Games will get underway in Austin in mid-April. 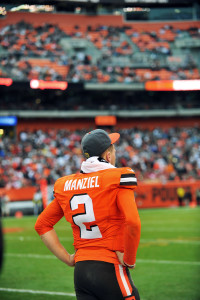 Manziel was thought to be interested in working out a deal to play in the Canadian Football League during the 2018 campaign, and was in fact offered a contract by the Hamilton Tiger-Cats in January. However, Manziel and his team reportedly weren’t pleased with the terms of the pact, and set a January 31 deadline to ink a new deal. That date has since passed, but the Tiger-Cats were still willing to pursue an agreement with the former first-round pick.

Earlier this week, Manziel appeared on Good Morning America and detailed his struggles with addiction and bipolar disorder. “I was self medicating with alcohol because that’s what I thought was making me happy to help me get out of that depression to a point where I felt like I had some sense of happiness,” Manziel said. “But at the end of the day, when you wake up the next day after a night like that or after going on a trip like that, and you wake up the next day and that’s all gone.”

Want to play professional football? The Spring League is ready to give a chance to hopefuls everywhere with tryouts in multiple cities this fall, according to a press release. The Spring League will hold its first open audition in New York (October 1), followed by events in Cincinnati (October 8), Memphis (October 22), Dallas (November 5), Atlanta (November 19), Tampa (February 18), and Los Angeles (February 25).

Last year, The Spring League launched with four teams playing in an accelerated six-game season. The league, which is not affiliated with the NFL, featured a number of notable names, including defensive end Greg Hardy, tight end Kellen Winslow Jr., and running backs Ben Tate and Ahmad Bradshaw. It’s likely that we’ll see some more familiar faces when things kick off in April.

Here’s more from around the world of football: