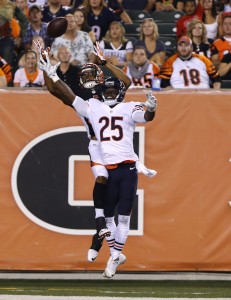 Porter was allegedly involved in a altercation with a woman on October 5 (one that she claims became violent when Porter grabbed her face and neck area). Police arrested Porter five days after the incident, at which time they found him in possession of at least 46 prescription pills (and no prescription), marijuana, drug paraphernalia, and a firearm, WWLTV reports.

Legal issues aside, Porter has struggled to find a new NFL home this offseason, and hadn’t drawn any known interest since being released by the Bears in April. That’s likely due to his age (31) and his performance in 2016, when he graded as a bottom-five cornerback in 15 starts for Chicago, per Pro Football Focus.

Porter, who’s perhaps most-well known for his fourth quarter pick-six of Colts quarterback Peyton Manning that sealed Super Bowl XLIV for the Saints, isn’t likely to land a contract following the incident. But even if he escapes legal ramifications, Porter could still face NFL discipline if and when he returns to the league.

The Bears released cornerback Tracy Porter, according to a team announcement. Porter had two years to go on the three-year, $12MM deal he signed with the Bears in 2016. Now, the Bears will carry $600K in dead money for the coming season.

The former Super Bowl hero had a decent 2015 season with Chicago, but he was unable to reprise that performance last year as he played though a knee injury. Porter finished 2016 as the 107th ranked cornerback out of 111 qualified players, according to Pro Football Focus. Now, the Bears are moving on from the 30-year-old (31 in August) as they look to improve their secondary.

This offseason, the Bears added free agents Prince Amukamara and Marcus Cooper. Even after cutting Porter, the Bears still have eight corners under contract and they are expected to consider cornerback prospects early on in the draft. At No. 3 overall, Ohio State star Marshon Lattimore is expected to be in the mix.

A member of four different teams from 2012-15, former Super Bowl hero Tracy Porter looks to be sticking in the same place for the first time since 2011.

The Bears are re-signing the veteran cornerback, according to Ian Rapoport of NFL.com (on Twitter). It’s a three-year deal for Porter, Jeff Dickerson of ESPN.com tweets.

Following his successful Saints tenure that lasted from 2008-11, one that peaked with the memorable interception-return score that lifted the Saints to their only Super Bowl title in 2009, Porter’s bounced around. He joined the Broncos in 2012 and Raiders, Washington and the Bears in the seasons that followed.

The 29-year-old Porter teamed with 2014 first-round Kyle Fuller last season outside, starting 13 games — the second-most of Porter’s career. Porter’s most came when he broke with the starters for the 2013 Raiders in 16 contests.

Set to turn 30 before the season, Porter will again compete for a starting position with the Bears. He finished last season with 12 passes defensed — one shy of the career-high mark he set in Oakland in 2013 — and one interception. Most importantly, Porter returned to a starting lineup on a consistent basis after starting in just one contest in Washington.

A former second-round pick, Porter will have the opportunity to be a full-time starter for the first time since his Saints stint.

The Bears are working to retain cornerback Tracy Porter before the market opens, according to Ian Rapoport of NFL.com (Twitter link). But the potential list of suitors for Porter is growing, per Rapoport, especially now that Janoris Jenkins is off the board and the Raiders are targeting Sean Smith.

Porter, 29, has a solid season in Chicago, where he rebounded from a down year in 2014 to become a full-time starter once again. He started 13 games, posting one interception and 12 passes defensed. Porter certainly isn’t a star, but he acted as a veteran presence on a Bears defense that needed all the help it could get. A former second-round pick, Porter has spent time with the Saints, Broncos, Raiders, and Washington in addition to the Bears.

The Bears can re-sign Porter at any time, but if he wants to join another club, Porter will have to wait about two more hours to officially agree to a new deal. Chicago, meanwhile is also said to be targeting offensive lineman Jeff Allen and linebacker Danny Trevathan.

The Lions and Bears each formally announced additions to their coaching staff today, with Detroit naming a new quarterbacks coach and Chicago confirming a new wide receivers coach.

As previously reported, the Lions’ new QBs coach is Brian Callahan, who spent the last six seasons with the Broncos, and has previously worked with Detroit offensive coordinator Jim Bob Cooter. In 2015, Callahan was an offensive assistant in Denver, playing a part in coaching the club’s QBs.

As for the Bears, their new wide receivers coach is Curtis Johnson, who had been Tulane’s head coach for the past four seasons after serving as the WRs coach for the Saints from 2006 to 2011. Joining Johnson in Chicago is Ben McDaniels, whose hiring was also reported last Friday. Josh McDaniels‘ brother officially joins the Bears as an offensive assistant.

The Bears have added some veteran depth in their secondary, signing cornerback Tracy Porter to a one-year contract, the team announced today (via Twitter). Porter became a free agent last month after being released by Washington.

Porter, 28, was a full-time starter at cornerback for the Raiders in 2013, and signed a two-year, $6MM deal in free agency last year with Washington, but saw his role reduced significantly in 2014. Before he landed on the injured reserve list in November, ending his season, Porter only played 89 snaps for Washington, finding himself buried on the depth chart behind Bashaud Breeland, E.J. Biggers, David Amerson, and others for a good chunk of 2014.

While ’14 wasn’t a good year for Porter, he has accumulated plenty of experience since entering the NFL as a second-round pick in 2008, spending time with the Saints and Broncos before heading to Oakland and Washington. For his career, he has appeared in 68 regular season contests (60 starts), totaling 287 tackles, 10 interceptions, and 54 passes defended.

Porter, who was in New Orleans back when new Bears GM Ryan Pace was in the Saints’ front office, will join a group of cornerbacks in Chicago that includes Kyle Fuller, Tim Jennings, Demontre Hurst, and fellow free agent signee Alan Ball, among others.

10:22am: Releasing Chris Chester won’t be the only roster move Washington makes today, according to Mike Jones of the Washington Post, who reports (via Twitter) that the team is also cutting ties with veteran cornerback Tracy Porter. Like Chester, Porter had one season remaining on his contract with the team, so he’ll hit the open market a year early.

Porter, 28, was a full-time starter at cornerback for the Raiders in 2013, and signed a two-year, $6MM deal in free agency last year with Washington, but saw his role reduced significantly in 2014. Before he landed on the injured reserve list in November, ending his season, Porter only played 89 snaps for Washington, finding himself buried on the depth chart behind Bashaud Breeland, E.J. Biggers, David Amerson, and others for a good chunk of 2014.

Porter’s reduced role and his health problems make the decision to release him an unsurprising one, particularly with his cap number on the rise this year. The former second-round pick would have earned a $2.25MM base salary and up to $250K in per-game roster bonuses if he had remained with the team. Instead, he’ll count for just $1MM in dead money on Washington’s books.

Tyrann Mathieu claims he feels better than ever, and NFL.com’s Conor Orr notes that the Cardinals defensive back is no longer wearing a knee brace or thumb cast. Despite Mathieu being healthy for the first time in his career, the former third-rounder is still tentative about his recovery:

“It just feels good to be free…You try to stay as optimistic as possible, but there is a reality to it, too. It’s kind of hard to keep telling yourself it’s going to be all right, especially when we got into the thick of everything last year, thinking that if I was 100 percent, I’d probably be able to help my team a whole lot more than I’m doing right now.”

3:27pm: The team has confirmed that Porter has been placed on IR and that Minnifield has been promoted to the active roster in his place (Twitter link).

2:39pm: Speaking to reporters today, head coach Jay Gruden announced that Washington will place veteran cornerback Tracy Porter on season-ending injured reserve, according to Mike Jones of the Washington Post (via Twitter). Porter left the team’s Week 12 game against the 49ers with a shoulder injury.

Porter, 28, was a full-time starter at cornerback for the Raiders a year ago, and signed a two-year, $6MM deal in free agency with Washington, but saw his role reduced significantly this season. Although he earned more frequent snaps on defense during the last couple weeks, Porter only played 89 snaps for the year, finding himself buried on the depth chart behind Bashaud Breeland, E.J. Biggers, David Amerson, and others for a good chunk of 2014.

Because he inked a two-year contract, Porter remains under team control for the 2015 season, but his base salary will increase to $2.25MM, which may be exorbitant for Washington if the club views him as a fourth or fifth corner.

With Porter heading to the IR, Washington will have an open spot on its 53-man roster. According to John Keim of ESPN.com (via Twitter), defensive back Chase Minnifield looks like the probable candidate for promotion from the practice squad, but nothing’s official yet.